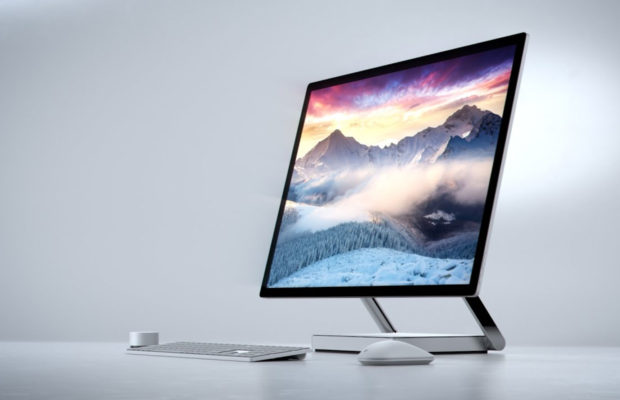 The Surface Studio: An all-in-one Windows 10 computer unveiled by Microsoft last week, is an all-around beast – it definitely doesn’t just look brilliant, it is BRILLIANT.

Remarking in several interviews on the Surface Studio, Microsoft’s head of industrial design Ralf Groene said “We wanted it to be a floating sheet of pixels.”

Microsoft’s design aesthetics have come a long way since they first launched the surface pro PC’s, and the new Surface family member is proof of that. From the tiny plastic feet that keep the box-shaped main computer in place, to the elaborate sloping mechanism in the handles, all the way down to the angle at which the screen tilts. All this boils down to provide a graceful and exceptional user experience.

The Surface Studio, simply consisting of two parts, is made of aluminum and has a 28-inch ultra-thin modifiable display supported by chrome handles that are connected to an unbelievably small, yet powerful base. Accordingly, the guts and the connections of the computer are not found in the display, but rather they’re in the base. This makes the screen lighter and easier to manipulate.

Tailored for creators, the team behind the Surface Studio thought it crucial to have a drafting mode, mimicking the standard 20-degree tilt angle of drafting boards. The weightlessness, along with the innovative Zero Gravity hinges, makes it effortless and more efficient for Artists and designers to form ideas in draft mode and then lift the screen up to look.

Storage-wise, options include rapid hybrid drive options: 1TB or 2TB paired with memory options that are either 8GB, 16GB, or 32GB RAM.

Accessories consist of the Surface Pen, Surface Keyboard, Surface Mouse, and the optional Surface dial, which can be used to manipulate onscreen elements.

Connections and expansions are housed in the base of the Surface Studio, which contains 4 USB 3.0, full-size SD card reader, Mini Display port, and 3.5mm headset jack.

On the audio side, the Surface Studio consists of dual microphones and Stereo 2.1 speakers with Dolby Audio Premium.

The Surface Studio also contains a cool Security protection feature that uses the Windows Hello2 face sign-in and likewise has a TPM chip for enterprise security.

Pre-orders are now available and the Surface studio will ship in early 2017. Now, the prices start off at $3,000 and go all the way up to $4,200, a bit expensive but you certainly get your money’s worth.

Simplicity is key and Microsoft perfected that with the Surface Studio and Surface book, in terms of not only the exterior design but also the engineering and the interior construction of both. There’s not a lot to complain about. It’s evolved. It’s definitely a good start for refining their products and Microsoft is doing a great job. Some are going to lament that the Surface Studio is a rip off of the iMac, or that it’s ridiculously expensive but it all comes down to the customer’s personal preference.

Nonetheless, here’s something to think about: can the Surface Studio be the future of AIO PC’s?? Maybe, but for now it’s absolutely leading the way and pushing the innovation in the right direction.