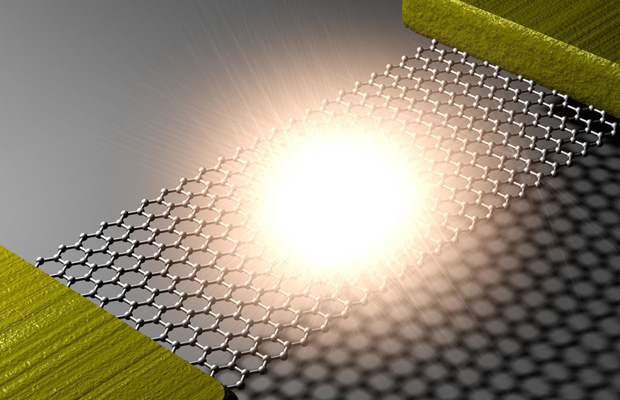 Imagine a light bulb made from something thinner than paper, but stronger than any other material known to man. Seems impossible — except it isn’t.

A group of scientists from Columbia University, Seoul National University and the Korea Research Institute of Standards and Science announced on Monday that they successfully developed a light bulb made out of graphene — material that’s only as thick as an atom, but strong as a diamond. Indeed, graphene is considered the world’s strongest material.

While the use of graphene to develop light bulbs is very modern, the scientists are approaching it using an old-school principle. They put electrical currents through strips of graphene attached to metal electrodes, and suspended them over the substrate; this causes the graphene to heat up and produce light. It’s the same thing as the glowing filament in traditional incandescent light bulbs, except on a microscopic scale.

What isn’t microscopic, though, is the light that the graphene filament produces: It heats up to about the same temperature as an incandescent light bulb filament — 4,532 degrees Fahrenheit (2,500 degrees Celsius — and produces light that can be seen by the naked eye. However, the heat was concentrated in a small section of the graphene because it’s a poor conductor of heat at those temperatures, scientists found.

What’s more, the color of the light can be changed by altering the distance between the filament and the substrate.

Young Duck Kim, a research scientist at Columbia and leader of the team, said that he discovered the light-emitting properties of graphene four years ago. He said this finding surprised others who assumed graphene wouldn’t give off light because it isn’t a semiconductor like, say, an LED is.

Kim and his team envision many uses for this technology in the near future. For example, it could be used in Optical Network-on-Chip communications, which attempts to do with light what is already done with electrodes in semiconductors. The heating properties of graphene filaments make it an optimal solution for this application, and Kim said this process could become more common in about 10 years.

Kim also said graphene could be used as a light attached to windows or walls in two to three years, and in making transparent displays in about five years. In order for these applications to be a reality, close collaborations between academia and the manufacturing would necessary, he added.

I Write Things.
Related ItemsColumbiaGrapheneLight BulbScience
← Previous Story Vaccines In The 60s Made People More Likely To Develop Chlamydia — And Now We Know Why
Next Story → NASA Released Stunning New Footage Of Earth & What It Shows Is Truly Breathtaking [VIDEO]