The Inside Story Of The ‘White Dress, Blue Dress’ Drama That Divided The Planet - TechGeek365

Home / More + / The Inside Story Of The ‘White Dress, Blue Dress’ Drama That Divided The Planet

The Inside Story Of The ‘White Dress, Blue Dress’ Drama That Divided The Planet 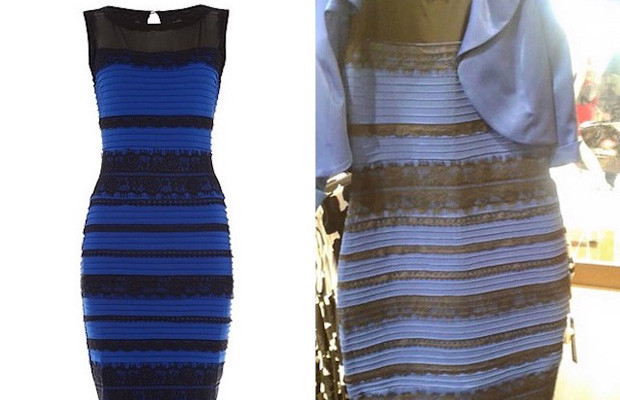 Here’s how the gig works: First, look at the image above. Do you see a dress? Perfect. Now, can you determine the dress’s color? Is it white? Is it blue? What is it?

You’re probably curious about a few things right now. One, is this serious? It is. Two, doesn’t the news media have more important things to write about? It does. And three, why is this even a question? Any fool can see that the dress is obviously white and gold. Or is it?

A puzzling thing happened on Thursday night, and it has nothing to do with the fact that Kanye actually apologized to Beck. It was a dress in which many people saw many colors. The thing was inescapable Thursday evening, consuming millions — perhaps tens of millions — across the planet and trending on Twitter ahead of even Jihadi John’s identification.

The problem was this: Roughly three-fourths of people swore the dress was white and gold, according to BuzzFeed polling. But everyone else said, by God, that dress was blue. Others said the dress could actually change colors. This writer, unfortunately, was one of those people, which gave rise to a brief existential crisis over the meaning of color and life and a bout of embarrassing squealing before some powerful newsroom bosses. “Don’t worry,” a colleague consoled. “It’s a brain thing.”

What shall be annotated in history books as the dress phenomenon began on the Scottish Isle of Colonsay. The dress in question was intended for a wedding, to be worn by the mother of the bride. So one day, the mom snapped a picture of the dress and sent it to her daughter.

“What happened was two of my close friends were actually getting married and the mother of the bride took a photo of the dress to send to her daughter,” singer Caitlin McNeill of the band Canach told Business Insider. “When my friend showed the dress to her fiance, they disagreed on the color.”

What madness was this?

Others couldn’t find common ground on the dress, either. Some said it was blue and black. Others said white and gold. So the daughter posted it to Facebook for guidance. From there, McNeill and other members of her band took notice. They had been set to play a show at the wedding. But they now, too, were absorbed by the dress drama.

“We discovered this photo of the dress for the bride and couldn’t agree on the color,” band member Alana MacInnes told The Washington Post. “After this, the whole wedding party was in a dispute over [its color].” So one of the band members took the contested photograph and plopped it on a fan page dedicated to a woman named Sarah Weichell.

“Guys, please help me,” the musician pleaded. “Is this dress white or gold, or blue and black? Me and my friends can’t agree and we are freaking the f— out. … I CAN’T HANDLE THIS.”

Then the thing went atomic. “It it seems to have taken over the Internet!” MacInnes told The Post. “It’s pretty mental how this all came about.”

Among those swept up: Taylor Swift (“It’s obviously blue and black”); The Los Angeles Dodgers (“It’s blue”); Justin Bieber (“blue and black”); Mindy Kaling (“It’s a blue and black dress. Are you f—–g kidding me”); Anna Kendrick and Rob Lowe (both white and gold); Julia Louis-Dreyfus (“It’s blue and brown. Period. Next?”); and millions of the lesser-known. “From this day on, the world will be divided into two people. Blue & black, or white & gold,” tweeted Ellen DeGeneres.

But it also instilled a deep sense of suspicion in any who beheld the dress. We live, after all, in an era pervaded by hucksters, and who can be sure anything is real on the Internet. This surely had to be a prank. Or was it your friend who was behind the prank? Why would anyone say the dress was blue when it was so clearly white?

“White and gold guy here,” said one troubled spirit on Reddit. “Still not convinced that you aren’t pranking me. Shakes fist angrily.”

“I feel like all the people saying this dress is black and blue are in on some sort of joke to make the rest of us feel crazy,” a conspiracy-minded person ventured. “I cannot see this anyway but white and gold and it doesn’t make sense to me how it could be anything different.”

Families were literally torn asunder — even the family of a Washington Post editor. A transcription of the relevant texts:

Son to Mom and Dad, accompanied by picture of The Dress: “What color is this dress?”

Mom: “Gold and white. U have got to be kidding….Kind of a light french blue and brown.”

Mom: “Do u really have nothing better to do than this?”

Was this the end? Was the dress some sort of omen? “Is this how we find out who goes to heaven and who goes to hell? #TheDress,” asked one person on Twitter.

“IS IT CATCHING?” another asked.

But clearer heads did eventually prevail. The answer involves how light enters the eye and the split-second decisions your brain makes upon discerning that information — without your even noticing. When confronted by an ambiguous situation like this dress, your brain may eliminate one color and focus on another. “Our visual system is supposed to throw away information,” University of Washington neuroscientist Jay Neitz told Wired.