The Murky Potential Of A Larger iPad - TechGeek365

Home / News / The Murky Potential Of A Larger iPad

The Murky Potential Of A Larger iPad 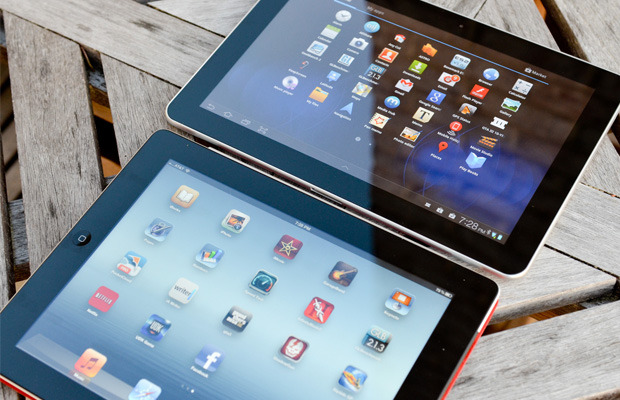 Samsung’s first Android tablet — the 7-inch Galaxy Tab — was not a cheap tablet, but it set a precedent for small tablets. This helped ultimately influence the development of Apple’s iPad Mini. But even more significantly, it paved a path for the price-busting Amazon Kindle Fire and then a deluge of products available for less than $150 and even under $100.

With this bloodbath at the lower end of the market, it’s no wonder that companies with premium brands such as Microsoft and Samsung have sought some refuge in larger form factors. Microsoft, further distinguishing its Surface Pro from the Surface 2, went large with the 12-inch Surface Pro 3. In doing so, it helped solidify a trend along with Samsung and its 12.2-inch Galaxy Note Pro and Galaxy Tab Pro. They were the first major players to introduce such large slates since the 13-inch Toshiba Excite that seemed to disappear from the market not long after it was launched.

Now all eyes are on Apple. In the run-up to the company’s big event this week, which introduced a pair of supersized iPhones, there was speculation that Apple would soon introduce an “iPad Pro” fitted with a larger screen. There was no iPad news in this go-round, but Apple may yet have an opportunity to make an introduction, perhaps as soon as October. We shall see.

For the moment, then, big tablets remain a niche for Microsoft and Samsung. But there’s more than just the display size that sets their products apart — things to bear in mind as we wait for Apple to come around with that bigger iPad.

Multitasking: First, the “pro” designation communicates a few things about productivity. Both Microsoft and Samsung play up the ability for their big tablets to display multiple applications simultaneously on their devices, even though that’s a feature Samsung and LG also offer on even their smartphones. But so far, despite rumors to the contrary, Apple hasn’t opted for the display of simultaneous apps on iOS, and there’s no support for this in iOS 8.

Keyboard: Both Microsoft and Samsung have also focused on the use of keyboards with their largest tablets. Case in point: the magnet-enhanced Type Cover keyboard for the Surface Pro 3 that folds up to attach to the base of the Surface for greater stability. Samsung offers a keyboard cover for its 12-inch tablets, and it also originally highlighted changes it made to the software keyboard to give it more of the feel of its physical counterpart — by including cursor keys for example. But while third parties produce many keyboard options for the iPad, Apple itself has steered clear, at least since the original iPad’s awkward keyboard dock.

Stylus: And there’s more to the input story. Both the Surface Pro and the Note Pro include sophisticated styluses; Microsoft’s stylus boasts the slick ability to trigger the Surface Pro into a note-taking mode with its OneNote app. Despite a few patent applications filed over the years, Apple has decried styluses on iOS since the introduction of the iPhone.

Pricing: Pro tools, of course, also connote a pricing premium. In Microsoft’s case, it now offers the Surface Pro 3 with a Core i3 processor for $799, less than the previous Surface Pro 2 but still expensive compared with many tablets. The Samsung Galaxy Note Pro 12.2 lists for $849, but Samsung sells it direct from its Web site for $799. Indeed, the availability of styluses and generous keyboards likely help justify the relatively large price tags of these products.

Laptop competition: With their keyboards and multiple-app capabilities, these big pro tablets make no secret of their ambitions to take on the laptop. Samsung, which has a very small share of the laptop market, has no qualms about trying to use its Android leadership to attack the clamshell. (Curiously, though, it has steered clear of Android laptops such as HP’s SlateBook x2.) Microsoft is also something of a challenger when it comes to laptops, at least as far as its own hardware products are concerned. But Apple continues to enjoy strong sales of MacBooks and is investing in continued new versions of OS X. Despite its “post-PC era” rhetoric, it really has no antilaptop agenda, at least not for those machines running its own operating system.

So with all these awkward considerations for Apple, what’s left? Even from the perspective of content consumption, big tablets can provide a more immersive video and gaming experience. And they’re far better optimized to media such as magazines and sheet music. In other words, just as the iPad Mini maintained the essence of the iPad proposition, a larger iPad Pro likely would stick to the fundamentals as well.

But while the iPad Mini offers that experience at a discount to the $499 (and up) iPad Air, a larger iPad Pro would certainly cost more than the Air, and introduce weight and handling issues that are common to bigger tablets. That’s why, for now anyway, Apple’s route to getting content onto a larger flat display is the stationary and inexpensive Apple TV.