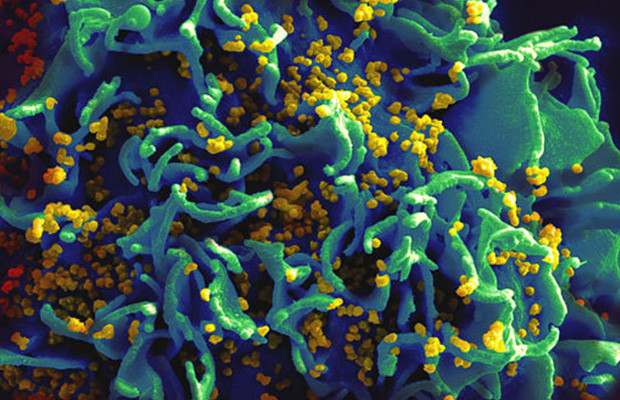 A new class of HIV drugs might be around the corner. By injecting people infected with HIV with a single dose of antibodies, researchers were able to reduce the presence of the virus in the blood of study participants — for 28 days. This unprecedented result means that it might one day be possible to reduce the frequency of HIV drug intake, or suppress the virus for extended periods of time, following the use of antiretrovirals.

“We were able, with the antibodies, to suppress the viral loads of viremic patients — patients that are HIV infected, but that aren’t treated,” says Florian Klein, co-author of the study published in Nature today, and an immunologist at Rockefeller University in New York.

There are more than 1.2 million people living with HIV in the US, according to the CDC. In 2013, 47,300 people living in the country were diagnosed with HIV. For people who know of their condition — and can afford treatment — taking antiretroviral drugs is usually the only option. These drugs are designed to control the infection by preventing the growth of the virus and reducing its presence in the blood of those who are infected. Unfortunately, they need to be taken every day for the rest of a person’s life. They can also be pretty harsh on the body; some people experience nerve damage, for instance. To address this issue, researchers have been looking at the antibodies that HIV patients produce naturally to fight the disease upon infection. And one antibody, in particular, stands out. Its name is 3BNC117.

It’s “highly potent,” and “very rare,” Klein says. Only 1 percent of people who have HIV produce this antibody.

In the study, the researchers injected 29 people with various doses of the antibody. Of those study participants, 17 were HIV-positive, whereas 12 didn’t have HIV at all. This was the first time that this drug has ever been used in humans, so including people who don’t have HIV in the study helped the researchers determine if the drug is safe.

“We didn’t see any severe adverse events, only minor ones,” like headaches, which are hard to link with the drug, Klein says. Moreover, the researchers were able to reduce the viral loads of the HIV infected patients who weren’t taking antiretrovirals. “For 28 days, we saw a significant reduction [of the virus in the blood].”

That “significant reduction” part is important; it means that although the drug reduced the presence of the virus in the participant’s blood, it wasn’t able to completely suppress the virus — an effect that many people experience when they take antiretrovirals on a daily basis. “There, virus was still detectable, but it was lower than the amount seen [prior to the treatment],” Klein says.

“In my view this is the first step in a process to make anti-HIV antibodies into a treatment for HIV/AIDS,” says Geoffrey Stone, an immunologist at the University of Miami who didn’t work on the study. “This is a very exciting finding that suggests a new generation of broadly neutralizing antibodies discovered over the last six years can help defeat the virus, says David Montessori, an HIV vaccine researcher at Duke University who also didn’t work on the study. A single dose of the antibodies “had a dramatic effect that lasted several weeks in patients who were chronically infected with HIV.” However, it’s still unclear if the antibodies will be able to initiate long-term remission with continued drug use, he says.

What’s interesting about this antibody is that although it was able to lower the viral load of study participants for 28 days, it doesn’t actually make a big difference for people who produce it naturally. “People have looked at whether patients who develop a very good antibody response against HIV if they do better, and that seems to not be the case,” Klein says. This problem probably has to do with the fact that antibodies develop slowly and start out a very low concentrations. This allows the virus to mutate fairly quickly and avoid being attacked by the antibodies. “The virus is able to change the sequence of its envelope protein” — the part of the virus that the antibody detects — “quite rapidly,” Klein says. The virus changes its shape, so the antibody can’t bind to it anymore.

When you inject a high concentration of the rare antibody into the bodies of people infected with HIV, however, the virus does appear to be affected. Unfortunately, it’s unclear what exactly is going in the body after the injection. “It’s a work in progress to really understand what the virus is doing,” Klein says.

This isn’t the first time that researchers have looked at antibody-based HIV treatments. But Klein says that previous attempts — attempts involving different antibodies — weren’t very successful. “The effects that were detected weren’t as good and rather not very encouraging,” he says. This largely has to do with the fact that this antibody is more potent that the ones that have been studied in the past. That “means that you need more antibodies to neutralize the virus,” Klein says.

Overall, the antibody treatment is promising — but that’s really all it is. The study is very small, so the drug will need to be tested on a lot more people, and for far longer periods of time, before scientists can draw any solid conclusions about its effectiveness. Still, the study may end up leading us down an entirely new avenue for HIV drugs, Klein says.

Finally, an antibody-based drug might one day lead to a new type of HIV preventative. “These kind of antibodies can protect against infection [in primates],” Klein says. That application is a long way off in humans, however. To figure out if it can prevent HIV infection in humans, researchers will have to first gain approval for the drug as an HIV treatment. Then, they will have to run a number of large drug trials in an area where the risk of HIV infection is high.

This has been done before — an HIV preventative, called Truvada, is recommended by the FDA for anyone who is at risk for infection — but getting that recommendation took a very long time. Still, the possibility of such a preventative is interesting because, unlike Truvada, it probably wouldn’t have to be taken every day.

This is only the beginning, Klein says. As the research moves ahead, scientists might be able to modify the antibodies to make them even more potent. “And with the clinical data that we gain over the next few years, we will hopefully be able to use this method to the benefit of HIV-infected patients,” Klein says. So “it’s not ready to go on the market or anything… but we have very promising results.”

I Write Things.
Related ItemsAidsFDAHealthHIVRandomScience
← Previous Story Rapid Global Warming May Be Coming Sooner Than You Think
Next Story → Wingsuit Pilot Flies Through Flag On A Volcano In Breathtaking Footage [VIDEO]