Home / More + / Chia Pet Lets You Grow Your Own Undead

Chia Pet Lets You Grow Your Own Undead 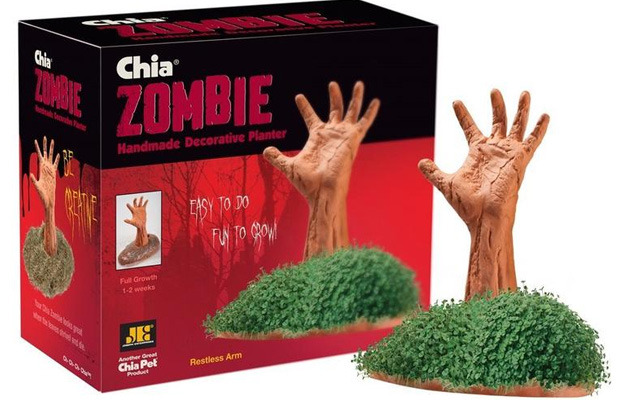 Chia has gained a following as health food, something that’s found floating in bottles of kombucha, but it used to be all about weird little clay objects that turn green when you water them. The classic Chia Pet usually takes the form of a cute kitten or puppy. It has never invoked the image of undead hordes grasping for a bite of your flesh…until now.

Joseph Enterprises, the company behind Chia Pet and other infamous as-seen-on-tv products like the Clapper and the Ove Glove, has released three variations on the Chia Zombie theme. One is a male zombie head named Creepy Holden. He has a lady friend called Lifeless Lisa. You slather the chia seeds on their heads, water them, and watch the funky, green, moldy-looking hair grow. 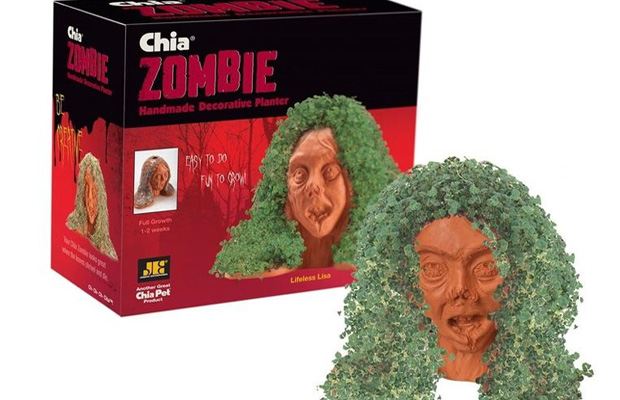 The disembodied heads both look suitably decayed and creepy, but the piece de resistance of the line is the “restless arm.” It’s a classic zombie arm breaking through the ground to clasp at its new undead existence. The chia seeds are placed all around the base of the arm to act as the graveyard grass.

Chia Pet zombies may endear the novelty product to the sort of people who wouldn’t look twice at a Chia Hello Kitty or Chia Newt Gingrich (a real product!). Chia may suddenly take off as the growable decor of choice for goths, Halloween lovers and extras from “The Walking Dead.”

A Chia Zombia will cost you around $15 (roughly £9.18, AU$16.50) from retailers like Home Depot and Amazon. It takes one to two weeks to grow a full coat, so you’ll want to plan ahead to use it as Halloween decor. It comes with enough seeds for three plantings, so you can regrow your pottery zombie in plenty time for a 2015 “Walking Dead” premiere party.