Home / News / Technology News / Grooveshark Thought It Would Live Forever, But The Music Industry Had Other Plans

Grooveshark Thought It Would Live Forever, But The Music Industry Had Other Plans 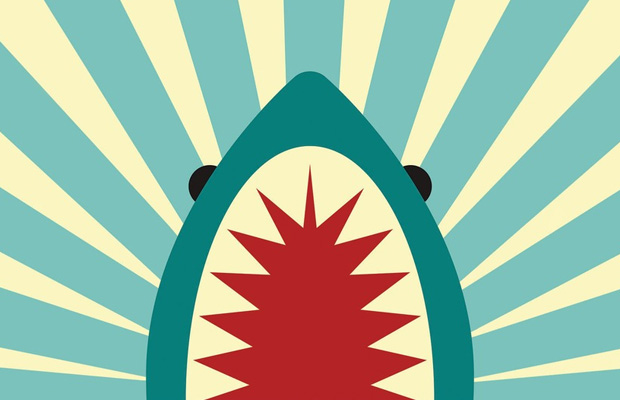 Even after every major record label sued Grooveshark simultaneously for copyright infringement in 2011, the company refused to entertain the possibility of defeat.

“There were reports that I thought were pretty amusing of us being dead,” Sam Tarantino, co-founder and CEO of Grooveshark, told me during a long interview in 2013. We were sitting in the company’s tiny office above a dive bar in New York, where a scattered staff, trimmed in size because of the company’s legal costs, still peppered the desks. “I’ve been doing this since 2006, we’re not going anywhere,” Tarantino added.

Almost exactly two years after Tarantino confidently declared that Grooveshark was here to stay, it has folded. The company was effectively sued out of existence. Last week, a judge determined that the company could be forced to pay $736 million or more in damages because Grooveshark employees, including Tarantino, allegedly personally uploaded nearly 5,000 copyrighted songs to the service.

“Despite the best of intentions, we made very serious mistakes,” Grooveshark said in a contrite statement on its website Thursday night, announcing an abrupt and complete shut down. “We failed to secure licenses from rights holders for the vast amount of music on the service. That was wrong. We apologize. Without reservation.”

Tarantino said he was unable to comment beyond that statement, presumably due to legal considerations from the settlement with the labels. Other Grooveshark employees we reached out to stayed mum on the final days as well.

The most surprising thing about Grooveshark is how long it kept going. The startup was founded in 2006 in a pre-iPhone age, during the music industry’s long and painful transition period from Napsterian illegal downloads to a sanctioned, Spotified cornucopia of streaming. Spotify and Apple’s Beats will likely go down as the distinguished benefactors of that transition.

Grooveshark, their predecessor, showed the potential of unlimited streaming early on — and the dangers of being a small player in the market. 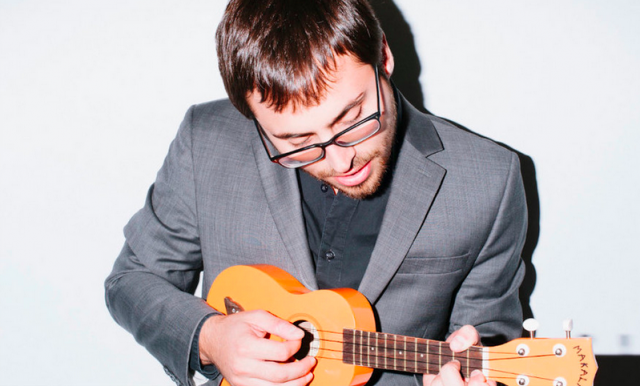 The fast rise and inevitable fall of Grooveshark

Tarantino and his cofounder Josh Greenberg were still teenagers in school at the University of Florida when they started Grooveshark. They didn’t raise tens of millions in funding or have a rolodex of record industry bigwigs, but unlike some disruptive services that came before, they also didn’t have a desire to pull one over on the record industry.

“Remember, I was 19 when I first went to the labels,” Tarantino recalled in our interview in 2013. “They looked at me and said, ‘Who the hell are you? Get out of my office.’ I always tried to get in there: First I got into the intern level, then the low-level and then the mid-level and now, finally after 7 years, we’re at where the people make decisions.”

In its first years, Grooveshark was a mashup of the two eras it straddled: Users could upload and download tracks, not unlike the illegal download services that proliferated in the early 2000s, yet the interface was built for streaming music in the way that Spotify, Rhapsody and others would make mainstream. In time, Grooveshark would shift entirely to the latter, with flourishes like a radio service built in, but it never managed to secure support from the labels.

“It was always the chicken and the egg: You go into the labels and they say, ‘That’s an interesting idea, go get users.’ And we get users and they’re like, ‘Oh, you’re a pirate,'” Tarantino said in 2013. “At the time they didn’t have a way to say, ‘Here’s an experimental license, go do it and we’ll negotiate later.'”

“It’s still the chicken and the egg problem for most startups,” he continued. “Unless you’re Apple and can drop a $100 million guarantee down. I sympathize: From the labels side, the big issue is they’ve got hundreds of startups [coming to them]. How do you bet on the four that will actually work?” 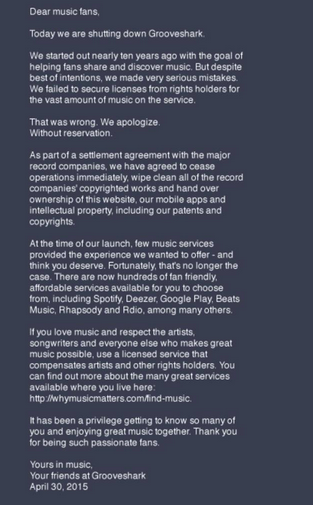 Another nail in the coffin for digital music innovation

So the labels placed their bets elsewhere: with larger companies and startups founded by proven entrepreneurs like Spotify’s Daniel Ek or backed by prominent musicians like Beats’ Dr. Dre and Jimmy Iovine. Big names with big bucks willing to play ball with the big labels.

That, some industry watchers say, is precisely why the death of Grooveshark is a loss for artists, fans and startups looking to improve the music listening experience — even if you don’t necessarily agree with Grooveshark’s approach.

“This is really another nail in the coffin for digital music innovation,” says Aram Sinnreich, a professor at Rutger’s University and author of The Piracy Crusade. “It’s going to absolutely have a chilling effect on the willingness of capital to invest in innovative business models. Ultimately that means that artists and consumers are going to suffer.”

Spotify, for example, has succeeded in attracting some 60 million active users, but it remains unprofitable and many artists have complained of dismal royalty payouts from songs streamed, which Sinnreich attributes to the terms imposed by the record labels. As the labels succeed in knocking down upstarts like Grooveshark, it gives them more leverage when dealing with companies like Spotify and Apple, the latter of which reportedly failed to negotiate a lower price for its Beats subscription service with the labels.

“Short term it benefits the Spotifys of the world by cutting down competition, but long-term it hurts them by undermining their ability to negotiate with rights holders,” Sinnreich says.

For now, both parties get to gloat. “This is an important victory for artists and the entire music industry,” the Recording Industry Association of America said in a statement Thursday about forcing Grooveshark to shut down. On Friday, CNBC reported that Spotify had successfully raised $350 million in funding at a whopping $8 billion valuation.

Grooveshark’s death won’t be marked with trumpets or folk songs. It will probably quietly pass into the graveyard of startups that just didn’t make it. Spotify, it seems, has won history.