How Qualcomm Is Getting Ready For The Coming Mobile Data Crunch 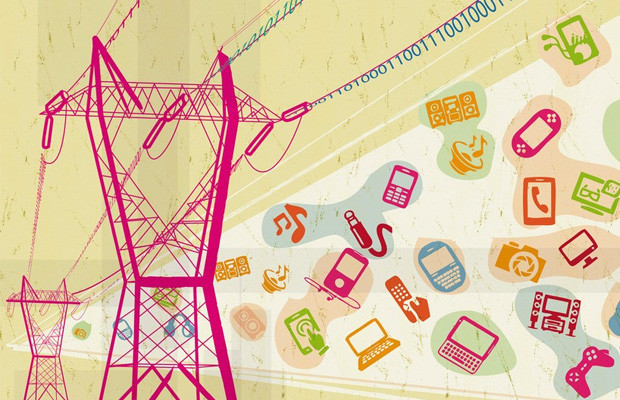 Demand for mobile data will increase 10 times by 2020 — reaching about 25 exabytes a month (that’s 25,000,000,000,000,000,000 bytes) — up from the current 2.5 exabytes, according to Ericsson and Cisco. Mobile data networks are slowly evolving to handle the growing demand, and Qualcomm is venturing forward with a way to use airwaves that are usually reserved for WiFi.

Wi-Fi exists in a part of the spectrum that’s often referred to as “unlicensed spectrum.” Different wireless providers lease chunks of spectrum from the government (usually through a public auction) to support their networks, but — as they often like to say — there is never enough of it. The frequencies that WiFi operate (2.4 and 5GHz), however, are off-limits, to ensure those devices work properly.

What Qualcomm has created is a technology that uses the 5GHz part of the unlicensed spectrum to augment a wireless provider’s LTE network. Called LTE-U, the tech is based on small cells — low-power nodes in a network that providers can more easily deploy than a typical cellphone tower — and it works even in areas where WiFi access points are densely packed.

“The unlicensed spectrum is really just used opportunistically [by LTE-U] for data offload,” explains Neville Meijers, vice-president of business development for Qualcomm. “If the spectrum is unavailable, the user is just pushed across into the licensed spectrum, so there’s never any disruption. That’s a big factor.”

Wi-Fi access points keep from interfering with each other by a protocol called “listen before talk” — basically making sure another access point isn’t using the same channel before transmitting. LTE, however, doesn’t have a similar protocol, and it probably won’t until late 2016 (when a new version of the standard will implement it). While LTE-U doesn’t use “listen before talk” per se, Qualcomm says it can “coexist peacefully” with WiFi.

Still, LTE-U has its dissenters. The non-interference aspect hasn’t been proven on a vast scale, and some operators, including AT&T and China Mobile, have a lot invested in using Wi-Fi itself to boost their back-end networks. The technology has been called “rude” in the past for its lack of “listen before talk.”

“If [a wireless provider] utilizes carrier-grade Wi-Fi, they end up having to manage two different networks,” says Meijers. “That puts a considerable constraint on the resources of the company. With LTE-U, you’re managing a single network.”

Qualcomm plans to demo the tech at Mobile World Congress 2015, with the small-cell chip coming in the second half of the year. If it works as well as Qualcomm claims, LTE-U could be a relatively inexpensive way for wireless networks to beef up capacity. Still, your regulatory mileage may vary; some countries require “listen before talk” in unlicensed spectrum by law, but the U.S. isn’t one of them (notably, China and India are fair game, too).

For consumers, the first phones with an LTE-U transceiver could come as soon as early 2016. And you thought your phone already felt old.