iOS 11 On The iPhone Will Upgrade Your Everyday Experience - TechGeek365

iOS 11 On The iPhone Will Upgrade Your Everyday Experience 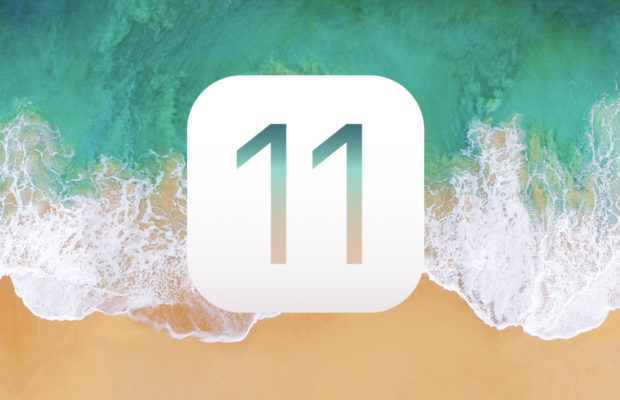 This fall, iPhones and iPads will get the latest version of Apple’s mobile software, first unveiled earlier in June. Developers have had access to a beta preview of iOS 11 since then, but on Monday it becomes available as a public beta. That means anyone who wants it can get it, but be forewarned: It’s not fully baked yet.

For iOS 11, Apple put a lot of focus on the iPad, and there are a plethora of new features that take the tablet — and the iPad Pro especially — to a new level of productivity.

But just because iOS 11 puts the spotlight on Apple’s tablets doesn’t mean there’s nothing to look forward to on your iPhone. There are a whole lot of improvements to the stuff you do every day.

Apple has — yet again — completely redesigned Control Center (the common functions and settings you access by swiping up from the bottom of the screen). It’s added a ton of new shortcuts and making the entire thing customizable. You can now add up to 17 shortcuts to the panel and fine-tune it to your needs.

Low power mode, Notes, Voice Memos, Alarm and Screen Recording (more on that in a minute) are among my favorites, but other notable additions include: Wallet, Do Not Disturb While Driving, and accessibility features like Guided Access and Magnifier. 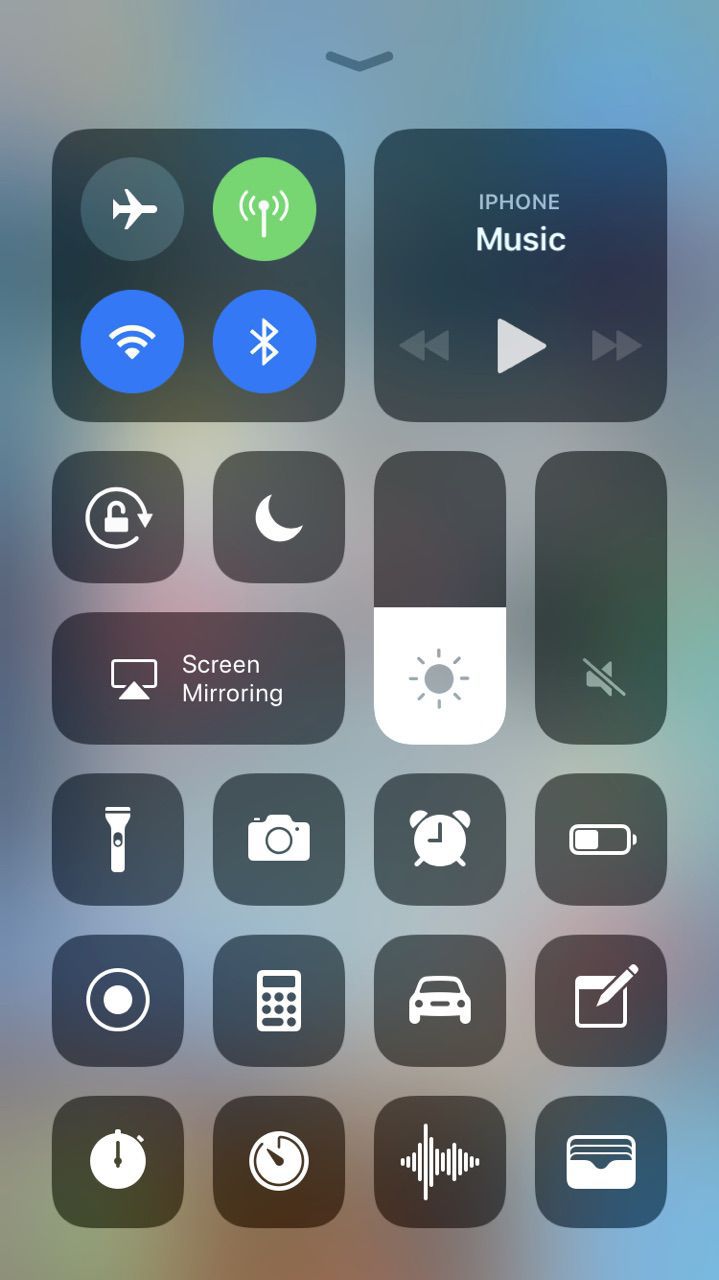 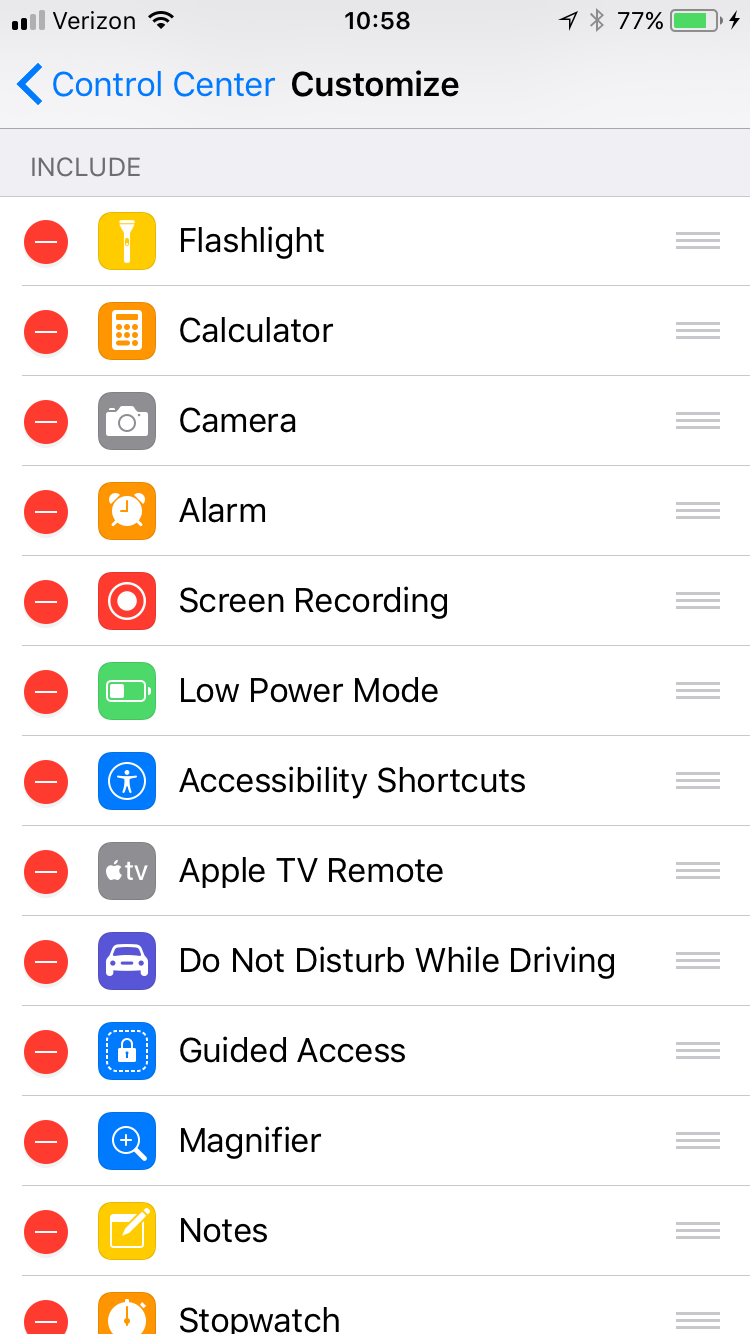 Each of these can be enabled in the Control Center menu in Settings where you can also change the order in which the shortcuts appear.

Having each of these shortcuts just a swipe away takes a bit of getting used to, but being able to access features like alarms and Low Power Mode without digging through a layers of Settings menus or launching another app makes so many everyday tasks that much faster.

Even better, these shortcuts have also been given richer 3D Touch interactions that make them more useful. Pushing hard on the brightness control toggles Night Shift on or off, for example, while using it on the flashlight lets your control its brightness. If you’ve been ignoring 3D Touch (which was often easy to do), the new Control Center will make you use it.

One of the best surprises of iOS 11, Apple’s new Screen Recording feature could easily be overlooked if you don’t where to find it. Existing only in the Control Center, it allows you to easily capture a video of your screen (and yes, it does make it easier to covertly record Snaps). 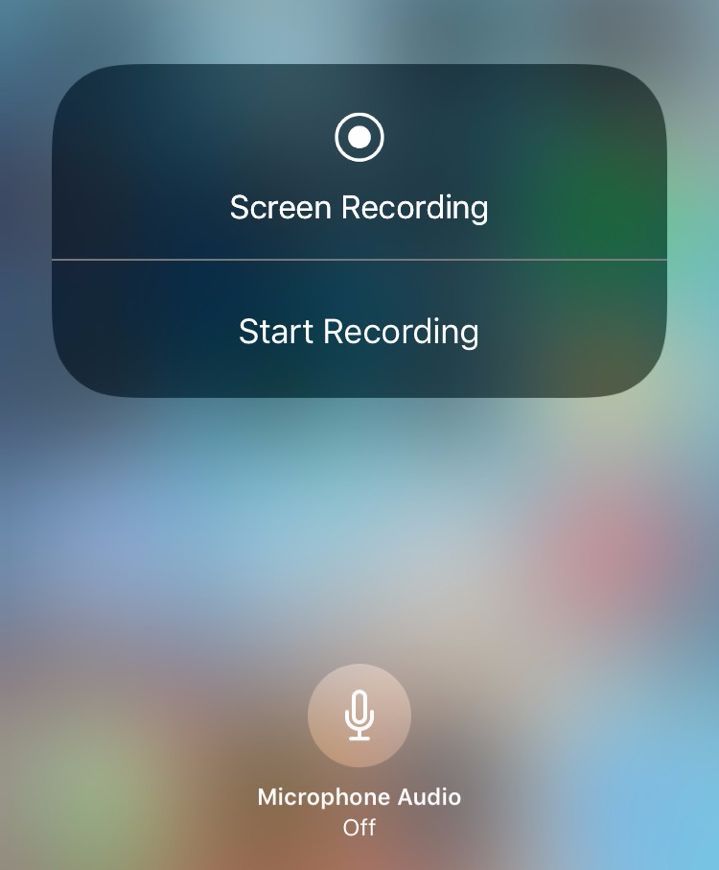 As part of Control Center, Screen Recording is fast, easy and reliable — something that can’t be said for third-party apps or Apple’s previous method that relied on QuickTime on a desktop.

A Reason To Use Live Photos

Since Apple first introduced Live Photos with iOS 9, the feature has felt more gimmicky than useful. The shots, which record a second a video before and after you shoot a photo, are hard to get right and relatively few platforms support the format unless you were willing to convert them to a GIF or video using a third-party app.

But if you were previously underwhelmed by Live Photos, iOS 11 will make you take a second look. The company added a suite of new editing controls (which you can also take advantage of in the new Photos app in macOS High Sierra, by the way) that allow you to have a lot more fun with the format. 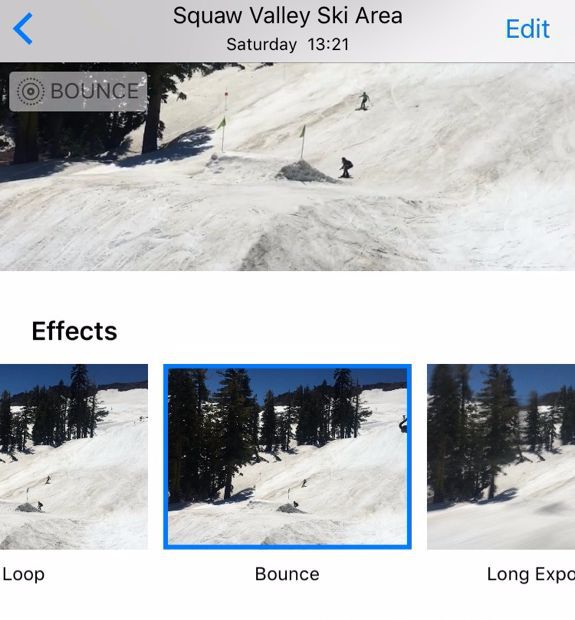 Swipe up on a Live Photo to bring up a new editing menu that lets you add three different types of effects: Loop, which which makes the clips loop à la Vine, Bounce, which makes your shot look like a Boomerang, and — best of all — Long Exposure, which lets you record motion with image stabilization.

I haven’t had much luck with Long Exposure shots yet, but the Bounce and Loop effects are nice additions.

So are the new editing controls, which let you make smaller tweaks to the photos after the fact. You can trim the clips to remove unwanted frames, mute to remove sound, and swap the image that appears as the cover image (what Apple calls the “key photo”).

Though the improvements to Markup (the ability to draw on a page or document) and the Notes app really shine on the iPad, the features are worth paying attention to on the iPhone as well.

The new Markup features work much the same way as they do on the iPad, minus Apple Pencil support (maybe on the iPhone 8…). Every time you take a new screenshot it appears in the bottom left corner where you can easily jump into Markup. It can be a bit distracting if you take a lot of screenshots, but it’s handy to have it there without jumping into the Photos app if you don’t want to.

Similarly, Files has a lot of potential, depending on your needs. The app lets you manage files between devices and accounts. Eventually, this will include third-party cloud services like Google Drive, though that support isn’t in the beta.

The Notes app has gets some much-needed attention. Apple added a ton of new formatting options, a document scanner, as well as the aforementioned Markup features, though it’s still not as feature-rich as some third-party alternatives like Notability.

After finally ditching the 16GB iPhone last year, it’s great to see Apple making even more improvements to how iOS manages storage in iOS 11. A new “iPhone Storage” menu makes it easier to both track your storage and free up more space. 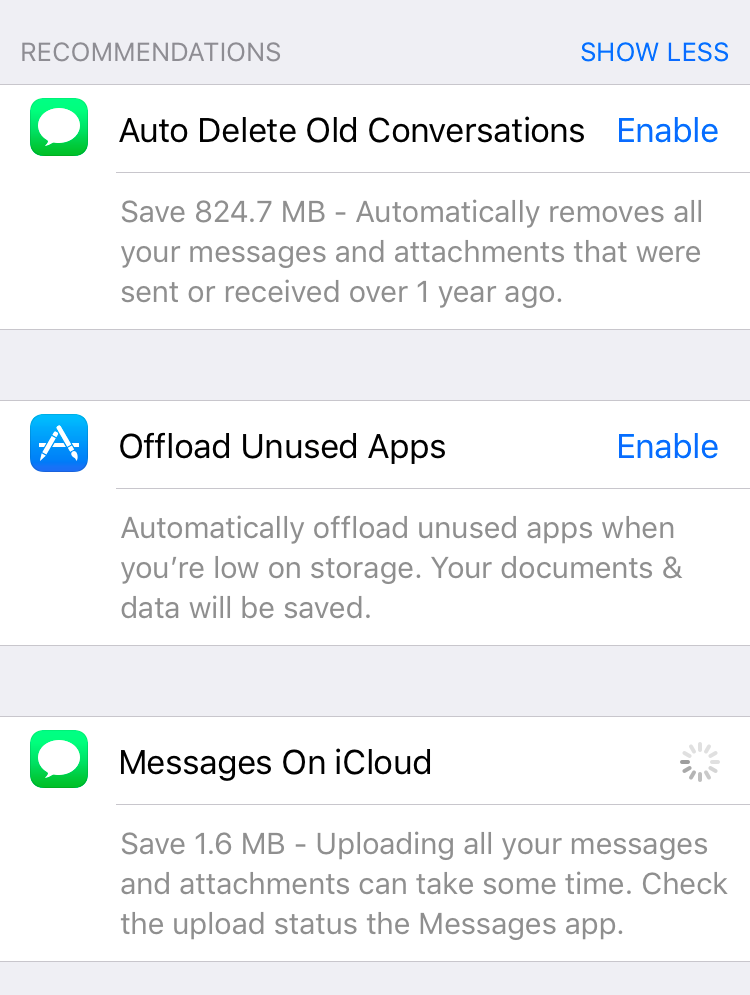 It provides “recommendations” such as “offload unused apps” or “auto-delete old conversations,” and tells you how much free space you’ll get back by doing so. It’s difficult to say just how effective these settings will be without more using it for a longer period, but it’s nice to see.

Apple gave a few of its stock apps facelifts but the App Store is without a doubt the most noticeable. Nearly every aspect of the app has been refreshed in ways that will be welcome to users and developers alike.

The new app launches on a new screen called “Today,” which provides a feed of editorial content about certain featured apps along with themed collections like “Games for Airplane Mode,” or “Rule at Road Trips.” 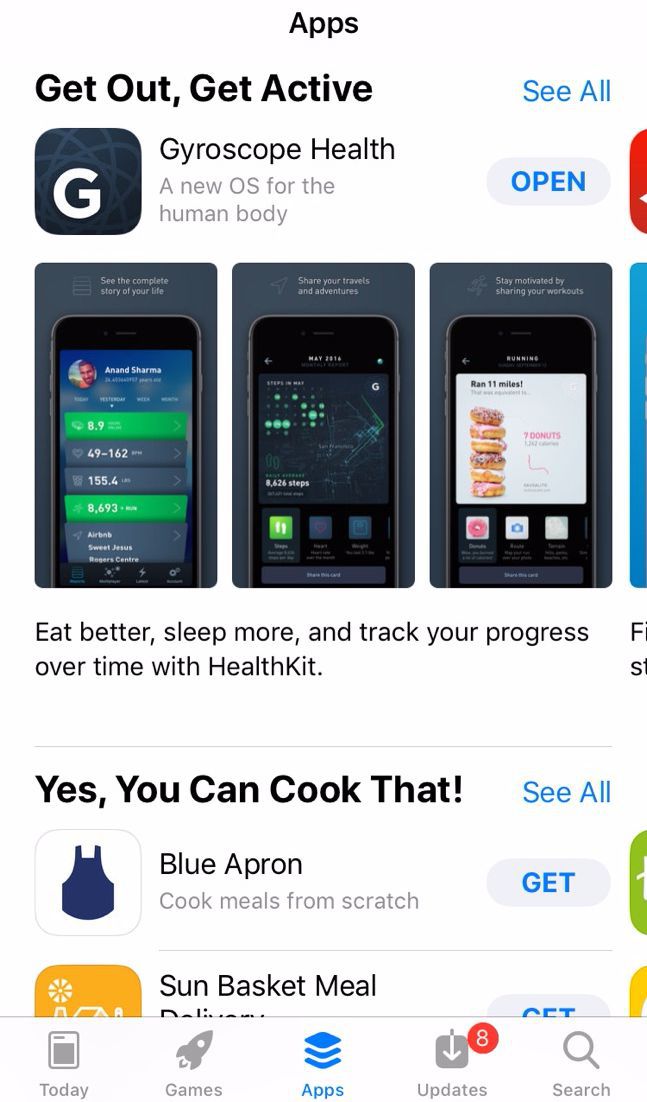 Elsewhere, Apple has separated its Store into two sections: one exclusively for games and one for everything else. The distinction shouldn’t be surprising given the sheer dominance of games in the App Store — they are consistently the most downloadable and profitable category — but both tabs are a nice change from the previous store’s more generic “featured” section.

There are also a number of developer-centric improvements to the App Store. Developers can now respond to individual reviews and choose when to reset their ratings (previously, ratings reset with each update). And, of course, iOS 11 marks the official end of legacy 32-bit apps so older apps that haven’t been updated in some time will no longer appear in search results and apps you have previously downloaded will no longer work.

The new one-handed keyboard mode could easily be my favorite new feature of iOS 11 and could make me reconsider my choice to stick with the non-Plus iPhone. 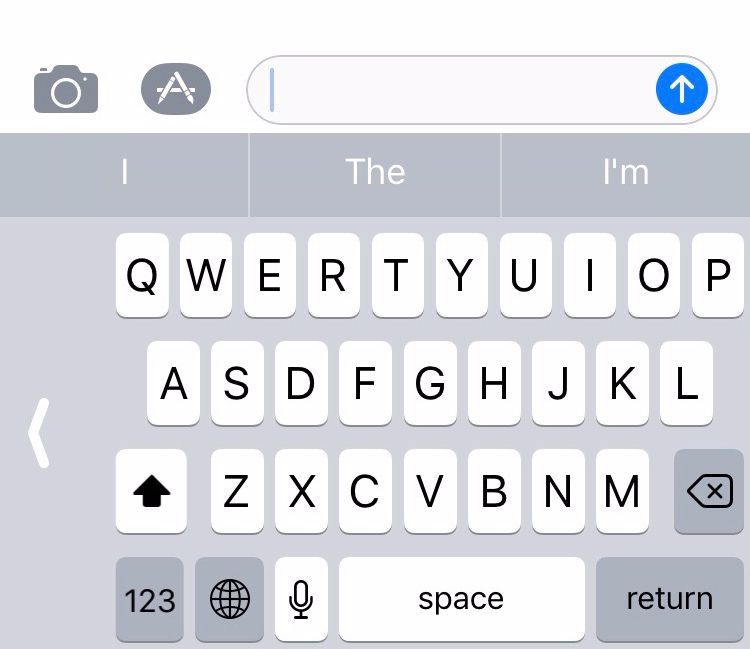 The new “smart invert” is a nicer version of the “dark mode” Apple introduced in iOS 10. It inverts colors in the display while preserving images and media files. At least in theory — so far this only seems to be the case in Apple’s stock apps, though this will no doubt be ironed out in subsequent releases. 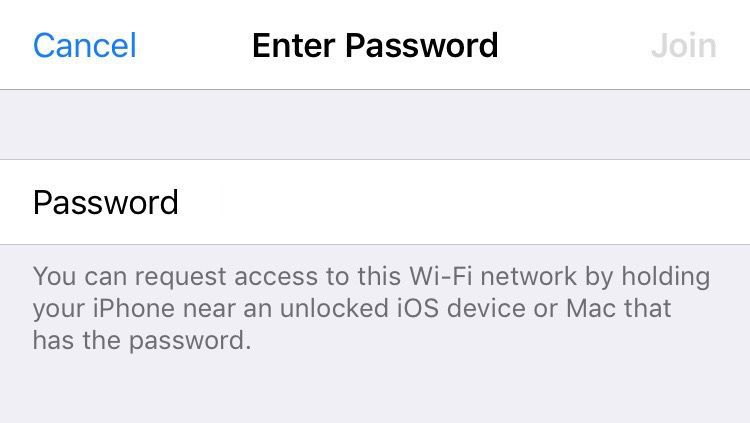 The new Wi-Fi sharing feature means you can let guests onto your network without giving out your password.

As someone who’s always hated the Notification Center, I like the more minimalist approach in iOS 11. The ugly pull-down tray with days of redundant notifications is finally gone. Now, swiping down from the top activates your lock screen, where you can view recent push notifications (the “today” screen with your widgets is still one swipe over as it was in iOS 10).

A new SOS feature allows you to easily call 911 (or your local emergency services number) without opening the phone app or asking Siri. 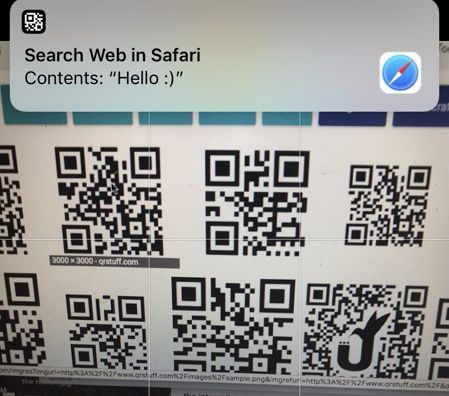 And Siri has a new and improved voice — one that’s supposed to sound more natural. I didn’t find the new voice to be vastly different, but it’s definitely noticeable.

A Win For Getting Things Done

While still far from perfect, the first public beta for iOS 11 proves that Apple can still make significant improvements without drastically changing the look and feel of iOS.

The emphasis on improving everyday actions — like typing, joining a Wi-Fi network, or jumping into your settings — makes the whole operating system feel smoother and easier to use. Likewise, the improved Notes app, Markup features and storage optimizations are additions that feel like they should have always been a part of iOS.

Each one of these on their own may not seem like a big feature, but taken as a whole, the update makes you feel like you might actually be able to use your phone for real work — not just basic tasks, like messaging.