The Truth About Crowdfunding: 5 Debunked Misconceptions 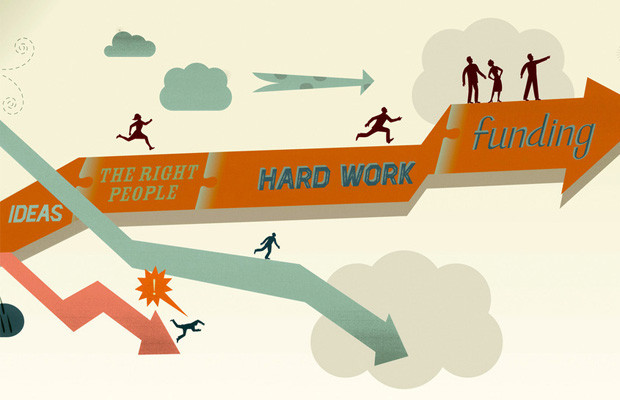 Admit it: you’ve thought of launching a crowdfunding campaign before. Especially when someone can raise $55,000 to make a potato salad. But it’s a lot easier said than done. And most campaigns — excluding the potato salad — take a lot of effort before the launch, during the campaign, and after (cross your fingers!) funding.

Before you launch your dream on a site like Kickstarter or Indiegogo, allow us to crush it slightly. Or at least bring you back down to earth. Here are the biggest misconceptions about crowdfunding from the crowdfunders themselves.

Myth 1: You’re going to get press

Unless you’re willing to pay a public relations firm, getting press is your job — and it’s not easy. Even if you have great connections to editors or are willing to send expensive prototypes blindly for potential press coverage, the outlook is bleak.

“Everyone thinks press is going to write about them,” said Jesse Potash, co-founder ofTrunkster, a Kickstarter campaign that raised over $1 million. “They go into it harassing every writer and a lot of times I just don’t think that it’s [the product] press worthy. Writers don’t want to write about something that’s not a real product yet.”

Potash does not recommend casting a wide net. Go after ten publications that “really make sense,” he said. He extensively researched top blogs in his industry who had written about crowdfunding campaigns previously, who seemed like they might be genuinely interested in his product, and who didn’t charge for coverage. Trunkster’s biggest traffic referrals were actually from smaller, targeted publications as opposed to some of the big-name publications they were lucky enough to land.

He also tried engaging travel influencers before campaign launch by including them in the design process and asking them to provide feedback, an attempt he considered “medium successful.” Potash found Twitter and Pinterest to be more successful in his attempt to reach influencers, but the trick that worked best was cross-promoting other live Kickstarter campaigns.

Myth 2: You need to launch now

Many entrepreneurs are in a hurry to launch but then spend the duration of their campaign trying to generate excitement and get the word out. That’s not how it should work, according to some of crowdfunding’s most successful campaigns.

“I would tell anyone who is going to launch their campaign — I would say hold off,” said Ryan Grepper, Chief Creative Officer at Coolest, and the creator of the most-funded Kickstarter of all time, the Coolest Cooler. “The date that you set for your launch is really arbitrary.”

Months before a campaign launch, creators should spend time creating a social media presence, building relationships with bloggers and media, and creating an email list. Grepper didn’t learn this until after his first campaign failed.

“If you don’t have any people that can help share and spread that excitement from the very moment your campaign goes live, you should wait,” Grepper said. “If you can make that splash on day one, you have a better chance of getting attention from media who can spread your message wider and farther.”

Grepper also recommends launching the campaign during the season in which the consumer would use your product. He learned the hard way by launching a cooler during the winter with hopes for summer delivery, but soon realized that summer purchases only happen during — when else? — the summer.

“You want to put it on a crowdfunding site when the consumer would use it,” he added.

Myth 3: Your success depends on the first 48 hours and help from friends and family

For Luke Leafgren, inventor of StandStand as well as a dean and Arabic teacher at Harvard University, the typical crowdfunding statistics didn’t apply. Many say the first 48 hours determine the success of the campaign. Furthermore, during a crowdfunding seminar, Leafgren was told that about 50% of backers will be friends and family.

“When we heard this figure, we were disappointed,” he said. StandStand’s numbers grew very slowly over the first three weeks and then plateaued. Then 80% of their backers joined in weeks four through eight — and 90 to 95% of the backers were strangers. So what happened?

Week three of the campaign was a discouraging one until a friend put Leafgren in touch with an editor at Fast Company. That article generated momentum — more press from publications likeSlate and more backers. “If we hadn’t had some of those big articles I’m not sure we would have had the success we had,” Leafgren said.

But there were also a lot of other factors, he added. StandStand is a high-quality product that works, people were willing to spend money on it, and it debuted during a time when people were interested in standing desks.

Friends and family did still play a role, he added. Although some connections didn’t buy the product, they liked the Facebook page or shared the campaign link with friends. “We did hear a lot of people say that their friend had bought a StandStand,” Leafgren said. “So we were super grateful for that — it’s an interesting way our network played an important role during our campaign.”

Between professional video production ($2,000 to $5,000), hiring a campaign marketing expert or social media specialist ($2,000 to $4,000), and finding public relations help (as high as $400 an hour), it’s safe to say that it takes money to make money. And that’s not even factoring in expenses for prototypes or considering the cost of your own time.

“If I was going to spend the money on my business, I would have spent it on social media anyways and collecting email addresses and marketing campaigns so it’s worth it to take it to crowdfunding and latch on to some of the sexiness,” said Garrett Wilson, CEO and Inventor ofCatzenpup, an automatic wet food feeder for pets that failed on Kickstarter. “It wasn’t not worth it.”

But it’s easy to get caught up in the campaign process. For example, people on Fiverr claim to know how to manipulate metrics to keep you in the top 20 projects, Wilson said. He found that coverage on blogs can range from $500 to $2,000 to write a review and large email blasts can cost as much as $5,000.

“I can’t afford that,” Wilson said. “I’d rather save it for developing the prototype.”

The average crowdfunding campaign is nine weeks long, according to Fundable. Although a longer campaign gives you more time to raise money, you may not want to drag it out — unless you have a lot of help.

“We were only 20 days and some of that was because we really wanted to hit a Christmas release date but some of it was because it’s really exhausting,” screenwriter John August said. “If you’re going to run a full 30 or 40 day campaign, that’s a slog. It’s work every day to keep up with your backers, to send out new updates, to make sure everyone is feeling heard and loved.”

August’s Writer Emergency Pack reached its goal in the first 45 minutes. But it still required 20 days of intense campaign management that many experienced crowdfunders call a full-time job. And once the 20 days were over there was still a lot of work that followed.

“You have to go into it assuming that you will succeed and have a plan for how you will fulfill when you do succeed,” August said.  “A lot of people are so wrapped up in the process of trying to get to that funding goal that they haven’t thought beyond it.”

He compares crowdfunding to being pregnant: “You have to be ready for that baby!”

I Write Things.
Related ItemsCrowdfundingEntrepreneurshipIndiegogoKickstarterStartups
← Previous Story Treating Employees Like Pals Can Be A Very Dangerous Game
Next Story → How To Be Yourself And Build Your Brand On Social Media