Transparent Sheet Turns Any Window Into A 3D Display - TechGeek365

Transparent Sheet Turns Any Window Into A 3D Display 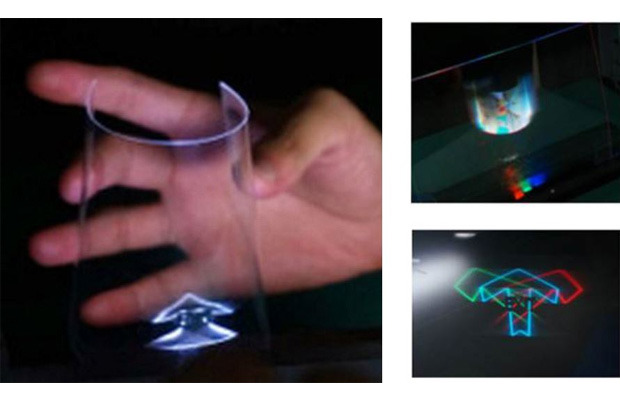 Transparent displays have been shown off at tech conferences for the past several years, but I don’t remember ever seeing one come to market. Instead we’re getting curved TVs and 4K resolutions. Transparent displays are coming to market, but in the form of a transparent sheet that turns any glass surface into a display.

Japanese company Omron Corporation has developed what it is calling “Transparent Plate-type Space Projection Technology” (TPSTP). The company has a lot of experience in developing LED back lights and light guide plates for LCD TVs, so decided to tweak its tech to create a display solution that does away with the traditional flat panel TV design altogether.

Details of exactly how TPSTP works are still thin on the ground, but it does rely on projecting an image on to the transparent sheet, with the projection hardware sitting at the base of the sheet and surface it is attached to. A single sheet produces a single color image, but multiple sheets can be stacked for color images and animation. And as the sheets are very thin, you shouldn’t be able to tell they are attached to the glass. The effect is an image that looks as though it was created inside the glass.

Omron believes its new display tech is going to be popular with advertisers and especially useful for store windows. However, it’s also going to be useful as a guide system when applied to other surfaces. For example, a gesture-control surface could use the transparent sheet to act as an input guide. I could also see this working as a security measure. You need the sheet to be able to interact with a touch-enabled surface. Without the transparent display attached there is no input guide.

Omron will be demonstrating TPSTP at Ceatec Japan 2014, which is being held between October 7-11 in Chiba Prefecture. Hopefully we’ll get to see some video footage of it in action.

I Write Things.
Related Items3D DisplayRandom
← Previous Story So Just How Contagious Is Ebola, Really
Next Story → 9 Reasons You Should Know A Little HTML & CSS