Anonymous, a loosely organized group of hackers with no leaders, announced its operation — codenamed #OpCharlieHebdo — on Wednesday after the attack. A Twitter account with the same codename, @OpCharlieHebdo, shared a video about the operation on Saturday; it also paid tribute to the 10 magazine staffers and 2 police officers killed in the attack.

The group claimed on Saturday to have hacked the website ansar-alhaqq.net on Saturday afternoon. In 2013, French newspapers described it as a French jihadist website. 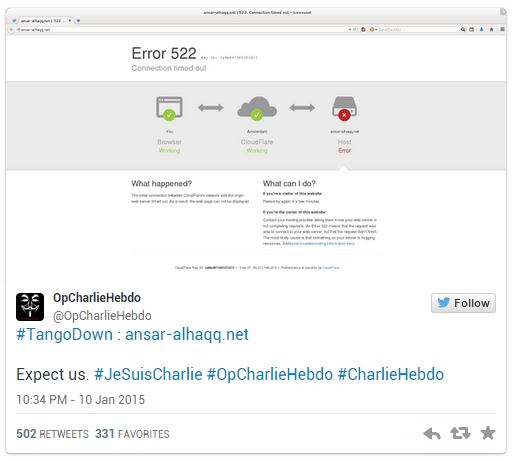 Ansar-alhaqq.net was down for more than an hour after Anonymous’ announcement, but had returned online at the time of this writing.

It’s unclear how the hackers were able to take down the site, but Anonymous’ usual weapon of choice is a cyberattack known as Distributed Denial of Service (DDoS), which consists of flooding a website with traffic. This kind of attack is not particularly sophisticated, and there are even off-the-shelf tools that allow almost anyone to mount something similar, according to security experts.

Still, DDoS attacks can be extremely effective. Major websites, such as those of MasterCard and PayPal, for example, have suffered outages due to these kinds of attacks in the past.

Another Anonymous affiliate from Belgium published a video in support of #OpCharlieHebdo on Thursday, proving just how amorphous and loosely associated the group is. However, #OpCharlieHebdo hasn’t received any endorsements from the more well-known Anonymous Twitter account @YourAnonNews.

The group is not new to operations like that of Saturday’s effort. Last summer, some hackers who claimed to be affiliated with Anonymous were fighting against Islamic State militants online. In addition, the group often launches operations in the name of free speech or other civil liberties.

And Saturday’s case is no different.

“It’s obvious that some people don’t want, in a free world, this sacrosanct right to express in any way one’s opinions. Anonymous has always fought for the freedom of speech, and will never let this right besmirched by obscurantism and mysticism,” the group’s #OpCharlieHebdo press release said. “Expect a massive reaction from us, because this freedom is what we’ve been always fighting for.”

I Write Things.
Related Items#IAmCharlieAnonymousCharlie HebdoHackingRandomSecurity
← Previous Story This Is Why You Need Your Wisdom Teeth
Next Story → The Ford GT Is Back, And Looks Incredible