Anonymous Just Declared War On ISIS With A Massive Hack

On Monday, Anonymous released the names of 9,200 Twitter accounts suspected to be affiliated with the Islamic State fundamentalist terrorism group. It’s the latest salvo in an online war between the two groups, in which Anonymous’ many unnamed users have taken down Islamic State-linked websites, social media accounts and even outed the group’s alleged technical experts to the public and authorities.

Why Anonymous is going to war: The release of the list of supposed Islamic State-linked Twitter accounts, posted online here, is apparently intended to pressure Twitter into taking action against accounts being used to spread extremist ideology and propaganda. While Twitter does suspend accounts involved in disseminating violent imagery such as the execution of hostages, others have managed to squeak by both Twitter moderators and Anonymous hacktivists.

Twitter and its founder Jack Dorsey have received death threats if the social media site takes action to suspend Islamic State accounts, but it is not clear whether they are credible.

Is this a good idea? Maybe, but there’s a good chance the U.S. government doesn’t want this help. An unnamed employee “with a major social media company” told Mashable in July 2014 that investigators would prefer the accounts remain up so that intelligence analysts can view what the Islamic State group and its supporters are posting uninterrupted. Intelligence expert Pieter Van Ostaeyen gave Mashable an example: One Islamic State militant complained on Twitter that others had not met him at a designated Syrian Internet cafe.

Fighting the Islamic State group will require more than a few hackers taking down websites. Government officials insist that it will take a sustained propaganda war waged by experts to diminish the group’s pull on social media.

In this light, Anonymous’ campaign to take down Islamic State Twitter accounts might even be counterproductive, because it could disrupt the government’s own campaign to contest Islamic State dominance on Twitter and other social media sites. More than that, exposing certain intel could potentially blow the cover of a much larger government-run counterintelligence operation.

“It is not a panacea, it is not a silver bullet,” a U.S. official told AFP of the government’s own anti-Islamic State campaign on social media. “People exaggerate, people think this is worthless or they think it a magic thing that will make the extremists surrender. It is neither one of those. It is slow, steady, daily engagement pushing back on a daily basis.”

Anonymous’ side of the story: Aside from the obvious schadenfreude of watching Islamic State get its virtual butt kicked by a collective of anonymous hackers, some experts are in favor of Anonymous’ attacks on Islamic State’s cyber-assets.

Foreign Policy’s Emerson Brooking wrote earlier this month that Anonymous seems much more capable than the government at battling extremism online, noting that the State Department’s “tiny Center for Strategic Counterterrorism Communications” has under 22,000 followers on Twitter and speculating that a de facto bounty system paid in Bitcoin for hackers who successfully disrupt militants’ online operations could “open a new front in the digital war against the Islamic State.”

As strange as an Internet bounty system might seem, Brooking is identifying a real threat. The Islamic State group’s mastery of social media has often acted as a force multiplier for its fighters by giving the group an ideal venue to project propaganda.

“Nearly everyone has seen the pictures of crucified enemies, the snapshot of the headless corpse of a little girl in a party dress, the videos of victims moments before a knife cuts through their necks,” writes Jillian Kay Melchior for TechDirt. “Maybe the peshmerga are strong, but they’re also afraid,” Kurdish fighter Bahjat Majid told her. “The strong media that the [ISIS] uses affects people.”

Taking Islamic State accounts offline could neuter their online presence. Brookings Institution fellow J.M. Berger, who collected data on millions of Twitter accounts, wrote for CNN that he and colleague Jonathon Morgan “found substantial evidence” that account suspensions seriously damage the Islamic State group’s online operations. Not only did the Islamic State presence on Twitter shrink thanks to the company’s decision to suspend many accounts, it wasted significant stretches of the group’s supporters’ time. 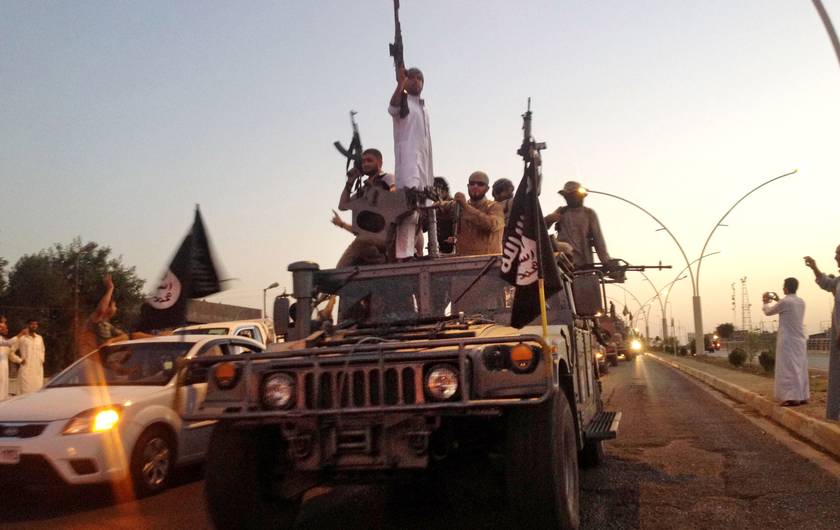 “ISIS users call the suspensions ‘devastating,’ and their fury provides evidence that suspensions hit them where it hurts,” Berger writes.

It could also challenge the Islamic State group’s successful online recruiting efforts, which rely more on social media than longer-established groups like al-Qaida that mainly rely on older Web platforms like websites and message boards.

But Anonymous is not the solution: Perhaps Anonymous has had some success drawing attention to the problem of the Islamic State group using Twitter unchecked, shutting down some negligible portion of their online efforts. Unfortunately, the idea that Anonymous could take on what is likely the world’s richest terrorist group, which commands tens of thousands of fighters, feels rather silly.

Harassing the Islamic State group on Twitter seems like a meaningless exercise when the group’s fighters are busy committing atrocities and wreaking havoc throughout Syria and Iraq. Even with U.S. airstrikes, the Islamic State group is still expanding its ideological reach to new territories and drawing sizable numbers of recruits. In fact, it recently grew dramatically when the Nigerian Islamist group Boko Haram announced an alliance with the Islamic State cause.

At best, Anonymous is wasting a few extremists’ time and entertaining the collective Internet’s self-indulgent fantasy of defeating evil with a few keystrokes. At worst, it could actively be driving the extremist community further underground, or fostering a false sense of complacency about the Islamic State group’s Web presence.

Disruption is what Anonymous is all about, so official acknowledgement of the role Anonymous is playing interfering with the jihadist Web presence would probably only egg them on. Like it or hate it, there doesn’t appear to be any stopping it.

I Write Things.
Related ItemsAnonymousHackingISISRandom
← Previous Story A Plane Turned Around Because Of An Overwhelming Smell Of Poo
Next Story → Passenger Footage From The Lufthansa Flight That Turned Back To Beirut After Engine Failure [VIDEO]