Can One Really Take A Social Media Vacation? 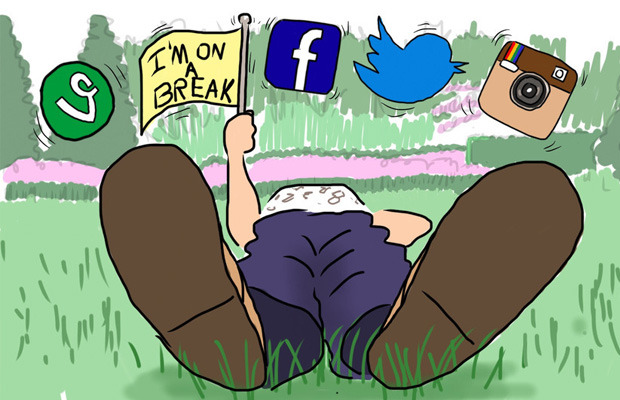 Stories about unplugging for the holidays abound at this time of year. Most deal with shutting down email and counsel leaving the computer behind. They also tend to skirt the whole issue of social media. It’s attached to your mobile devices, after all, so it’s pretty hard to leave it all behind.

I speak from experience. When I took a two week vacation in London, my Twitter, Instagram and Vine followers were along for the ride. I could almost hear their plaintive cries from the iPhone in my pocket.

“Hey, what are you looking at? It sounds interesting out there. Can we see? Just for a minute? Please?”

I plan on taking a chunk of time off before the end of the year and seriously don’t know if I can take a break.

But I’m thinking I should.

It may not be a trendy thing to do. I don’t notice my social feeds slowing down during the holiday season. If anything, they tend to fill up with a sort of pale reflection of all the merry-making happening in real life. I even tried to talk to Twitter and Facebook about holiday activity trends, but neither one of them seemed too keen on the idea of a “social media break” and didn’t end up giving me anything I could use here.

Recently I broke the 40,000 tweet milestone. I also have 621 Vines and 1,357 Instagram posts. These all indicate a healthy (or unhealthy) level of social engagement. I know there are others who Tweet, Vine and Instagram a lot more, but among my IRL social set, I’m known as an over-sharer, someone who is always on his phone or tablet sharing.

I do it because I love it but, between you and I, there are times when I’m tired and I don’t want to Tweet, Vine or Instagram. I do so at those times because I fear my silence will lead to a wave of unfollows. I mean, I get this feeling if I haven’t tweeted for two hours. It’s a wonder I can sleep six or seven hours a night. I should be waking up at 1, 2 and 3 a.m. to post something, right?

As the year draws to a close and, as much as I love social media, those moments where I just don’t want to engage have been increasing lately, which means I do need a break.

And there are some really good reasons for me to stop – at least for a little while. First of all, I could reengage with my wife and family. I mean really engage — look each of them in the eye. Have conversations. We do all of this, but as soon as I go somewhere interesting, or see something that makes me go, “Oh, how beautiful,” out comes the phone and … they’ve lost me.

They notice too and even though my wife understands that I’ve built a brand, I can sense the exasperation. Perhaps it’s when she says, “You’re tweeting that? Seriously? Uuuugh!” My wife. She’s not too subtle (and I love her for it).

The question is how do I actually take a break?

The existence of my computer — I mean phone — in my pocket means I not only have access to all my favorite social networks and social media tools, I can see my email and texts, too. And that smartwatch I’m wearing? It makes sure I don’t miss a notification, hangout message or key social share. I have trouble not checking email (work and personal) even when I’m on vacation. As soon as I do that, my social media is one tap away.

Perhaps I can just make a pledge to only check Twitter for news updates. I mean, that’s how I use it anyway. I’m constantly scanning it for breaking news or something interesting. Oh, look, Taylor Swift has signed up for the first manned mission to Mars. I must share that. Or at least favorite it. And what about that hard news tweet? Don’t I have an obligation to share that to my followers? Isn’t it my job to tell them what’s going on?

It’s not, of course. Sometimes I tweet out breaking news and am pleased that I was among the first to do so. I can tell because the retweets and favorites are through the roof. Ultimately, though, my goal is not winning a game of firsts — it’s to inform and enlighten. And when I’m not doing it, someone else will do it in my place. In fact, millions of people will.

So why can’t I step away for a just a little while?

I can, of course, but I have to overcome the fear that I will disappear — at least on a social media level. I will suddenly go from one of the interesting people you probably should follow (I hope), to someone who has a profile on social media, but rarely engages.

That’s ridiculous, I know. I can take a two-week social media break and survive, right?

Tell you what. Starting on December 22, 2014, I will take a break that will last until I take off for CES 2015 on January 4. I’ll let you know how I did when I return. Or perhaps you’ll know when I tweet for the first time during my vacation — and when you see that you’ll know I’ve failed.

I Write Things.
Related ItemsBBMFacebookInstagramLinkedInSnapchatSocial MediaTwitterWhatsapp
← Previous Story Former Google+ Designer Slams The Service For Being ‘Facebooky’
Next Story → Facebook Drops Bing In Favor Of Its Own Search Tool