Facebook Is Reportedly Testing A Standalone App For Phone Calls

Facebook may be trying to take over your phone app.

The social network is testing a voice-calling app that can screen your calls and show you information about who is calling, according to an image obtained by Android Police.

The app, called “Phone,” will display information about those who call you —presumably based on their Facebook profiles — and automatically block calls that come from numbers that have been previously identified as spam, according to the description in the screenshot. Facebook is known to test new features with small groups of users first, but the leaked image suggests the testing for this app may be limited to internal tests at the moment as it has an “FB-Only” note.

A Facebook spokesperson said “we are always testing things,” but declined to comment specifically on the Phone app. 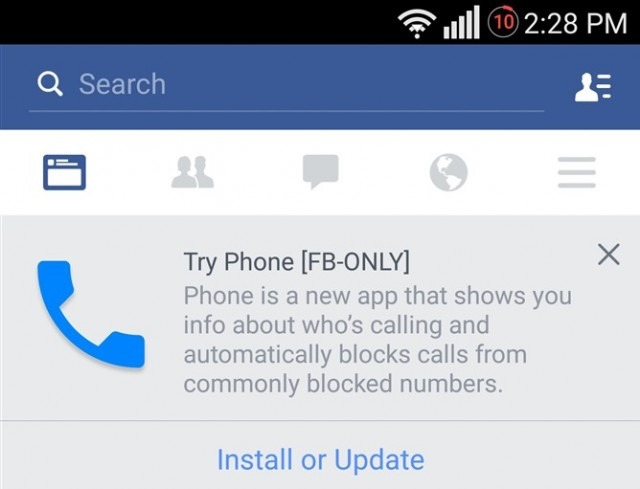 This isn’t the first time Facebook has experimented with voice calling. The company introduced voice calls to Messenger a few years ago and has been testing the feature on the Android version of WhatsApp, both of which rely on either a Wi-Fi or a data connection.

It’s not clear whether the Phone app would be an expansion of these existing voice-calling features or a standalone service, but the description suggests it would work for all voice calls, not just those made over a Wi-Fi or data connection.

I Write Things.
Related ItemsFacebookFacebook CallsPhone
← Previous Story If You Have A Router In Your Home, It May Have Been Hijacked
Next Story → SNOWDEN: Here’s Why I Won’t Use An iPhone, And Neither Should You [VIDEO]