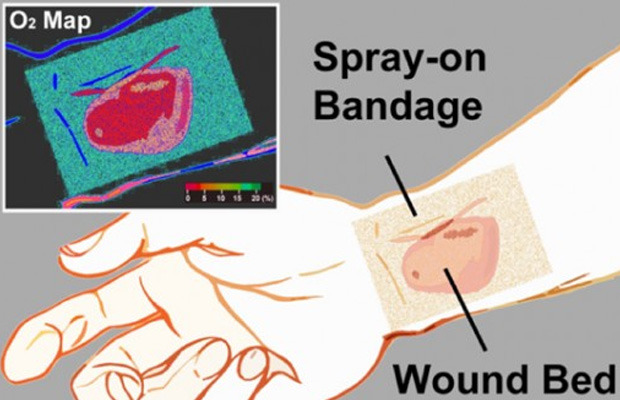 Tissue oxygenation is important when healing a wound, but it’s also difficult to measure. A new type of spray-on bandage developed by Professor Conor Evans of Harvard Medical School could make it much easier to track, though. The liquid bandage emits light to signify the levels of tissue oxygenation, which could allow medical staff to keep better track of healing in challenging environments.

The skin is your first line of defense against pathogens, so a break in that barrier is actually a big deal. Even a minor wound could lead to serious illness or even death if not properly handled. This is thankfully much less common in the modern era, but we can still do better with tools like Evans’ smart bandage.

The bandage is composed of two components–a sensor molecule with a long phosphorescence lifetime and the bandage material that holds the wound closed. The use of a phosphorescent material means the bandage absorbs and re-emits light. The color of the light is indicative of the level of oxygenation immediately beneath the bandage. The bandage is actually applied in two layers. The sensor-infused bandage liquid has to be laid down first, then a barrier material goes over top. This prevents oxygen in the air from interfering with the tissue readings.

A camera or smartphone with a flash is used to take a photo of the wound. The burst of light excites the phosphorescent molecules, and causes them to emit light based on their level of oxygenation. To aid in monitoring, the molecules use a green oxygen-insensitive reference dye, resulting in a green-red heatmap image. The green areas have good oxygen levels, and the red ones are lacking.

Researchers are now working on incorporating more sensing molecules into the liquid bandage that could monitor pH, bacterial load, and various disease markers. There is hope the bandages could be used in a clinical setting soon as no special equipment is needed to read the data–just a camera.

I Write Things.
Related ItemsHarvardRandomScienceSmart Bandage
← Previous Story Every Game Boy Game Start Screen Will Transport You Back To Your Childhood
Next Story → Gorgeous Image Of The Sun Looks Like Jack-O-Lantern In Time For Halloween