Here Are 10 Lessons That Only Arab Entrepreneurs Can Teach You 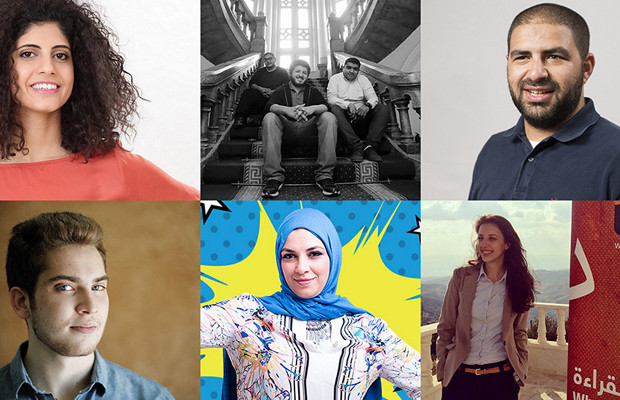 When it comes to launching a business, the Middle East is an environment which comes with a unique set of obstacles; as such, it takes a unique approach to overcome them. 10 leading Arab entrepreneurs were asked what key lessons only a startup founder in the MENA region can teach the world.

They are young, they are resourceful, and they have talent and an innate ability to break barriers. The Middle East’s generation of budding entrepreneurs has paved the way for an ecosystem that stands as one of the world’s most creative hubs, amidst a thorny environment where bureaucracy, stagnation and lack of investment are only some of the obstacles. CairoScene asks 10 leading Arab entrepreneurs and authors the key lesson only a startup founder in the challenging Middle Eastern environment can teach the world.

The founder the leading crowdfunding platform in the Middle East Zoomaal, Absi is an unstoppable entrepreneur who has founded over six companies and an NGO at the fresh age of 23. His offspring Zoomaal has funded over $1 million in different projects, stimulating creativity and innovation across the Arab world.

“Establishing and sustaining relationships: Arabs have an amazing ability to connect with new people, make friends, and sustain long-term relationships. The Arab hospitable culture allows them to tap into the hearts of people beyond financial interest. That is one of the reasons many foreigners enjoy living in the region; an Arab would take the time to take you around their country and pay for your meal for no other reason but to make you happy. In terms of entrepreneurship, this innate trait helps us in networking and establishing long-distance relationships.”

Featured by Forbes as one of the Middle East’s top 10 startups, Recyclobekia is the only company doing electronic recycling in the Middle East and North Africa region. Having started in a small garage in Egypt’s southern town of Tanta with a capital of only LE 6,000 and mentorship by Injaz Egypt, the startup managed to exponentially grow, currently processing 40 tons of waste per month.

“You have to learn how to swim against bureaucracy and survive the corruption. At Recyclobekia, it takes us a full year to export material without paying export fees; we always face difficulties at Customs, as we refine materials outside. But every time we talk to authorities at Customs, they send us to the Ministry of Industry, and from there they send us back to Customs again. There is also plenty of corruption, which means you always have to pay things under table. Add to this the ability to juggle with timing, as time in the Middle East seems to have no value.”

The protagonist of one of the first success crowd-investment stories in the Middle East, Hylooz was able to raise $230,000 from 45 investors from over the world in her first round. Her startup Abjjad, the Middle East’s first online network for Arabic books, has tripled traffic and user generated content in 2015 and made it to the semi-finals in this year’s MIT Enterprise Forum Arab Startup Competition.

“Never depend on verbal promises or extremely motivational and beautiful feedback; validate and document everything before getting involved with any individual, company, or a client that would provide either services or funding. Because people can easily fool you; not everything that glitters is gold.”

Offering audio content for Arabic-speaking users, Wahba’s mobile app Iqraaly has racked over 500,000 downloads since its launch in 2013, with a listenership of 3 million minutes every month. Founded in 2011, the startup has raised three rounds of Angel investment and published 35,000 audio pieces in books, articles, and podcasts.

“Don’t start a company, especially in the tech sector, unless you know how it is going to be done. Make sure that you start in a market where the value chain is not missing any part, which happens in the majority of cases in the Arab world. If you go for e-commerce, for example, the value chain is really weak in delivery and customer service, which is the heart and soul of e-commerce; whereas if you start a hardware company, it’s interesting because you would have to manufacture in China, so make sure the value chain is in place and strong. Also, never defer thinking about monetisation, from day one; this is a luxury some Western companies have.”

Launched in December 2011 with the boost of Amman-based accelerator Oasis 500, EKeif positioned itself as the Middle East’s ‘How To’ platform, providing high-quality tutorials in Arabic to over 82,000 subscribers. Kicking off with zero marketing budget, the startup reached over 1.6 million views per month.

“I’ve noticed that Arab entrepreneurs have their family support more, whether getting family to work with us on our startups, or providing the support group needed, such as our parents taking care of our children whenever needed.”

Together with his partner Omar, Soliman kicked off their bug-tracking app with a $10,000 fund and expanded worldwide, managing 70% of their operations in foreign countries. Having faced a challenging start due to the Egyptian 2011 uprising, the startup’s app, Instabug counts today with over 25 million users worldwide.

“Perseverance. Being able to operate in the toughest conditions and competing with big companies all over the world, as it happened to us with Instabug. Especially when you lack the basic work environment requirements, like a stable internet connection and electricity, that most of the entrepreneurs take for granted elsewhere.”

A winner of this year’s MIT Entrepreneurship Forum Startup Competition, Tabyaoui put together his 20 years of experience in the mobile development industry to partner with Mehdi Alaoui and create Screen DY. Nicknamed “the Middle Eastern version of Joomla,” their startup allows mobile developers to build complex, custom and native apps that work on all platforms within days.

“First, I would like to stress on the capacity of teams to persist on the innovative spirit, and to sustain a positive mind regardless of any kind of situation. Secondly, in terms of product, to bring answers to common pains experienced by the target population. To be disruptive doesn’t mean to change what is working well through a new product or service; but to find a way to make it better and better. Thirdly, entrepreneurs usually keep their innovations for themselves, worrying to lose their IP or to be copied. That’s the worst thing to think about.”

Ranked as Egypt’s fifth most successful startup, SuperMama is an industry leader in the online Arabic content field. One of Egypt’s prominent female entrepreneurs, El-Mehairy managed to grow the parenting web-based portal into a $3.5 million business, amassing a crowd of 2.2 million women who follow its multiple channels every month.

“In the Middle East, you have to struggle for everything. We even have to fight for internet connectivity, which is a God-given right in the West; so what we can teach is persistence, and what we need to learn on the other hand, is when to give up, because some people don’t. Bring someone from Silicon Valley here, put him to work in the conditions that we work in, and let’s see what they can do!”

“Passion, because despite the political unrest, lack of resources and governmental obstacles start-ups here have managed to survive and book for their ecosystem a well-respected entrepreneurial spot on the global map.”

A venture investor and former CEO of the Washingonpost.Newsweek Interactive, Christopher Schroeder is one of the most knowledgeable sources about entrepreneurship in the Middle East. In 2010, he was among the first to predict the tumult in a Washington Post op-ed about startups in the Arab world; and in the same year, as he was hosted to mentor at the Dubai Celebration of Entrepreneurship, he began a journey of research that would include 13 trips and 150 interviews with entrepreneurs across the Middle East, leading up to his book Startup Rising, the first look into the booming startup movement in the post-revolutionary Arab World.

“For much of the Arab world, these are mobile-first societies, and I am fascinated by the insight on how mobile can be used to solve problems and innovate in sectors like financial technology. The best Arab entrepreneurs are helping to build ecosystems bottom-up – well in advance of top-down institutions stepping up to lead, though there are exciting initiatives in motion in the UAE and Jordan. That tenacity often DESPITE top-down support is a lesson in courage for entrepreneurs everywhere. In a region where 25, 30, or 35% of startups are funded by women, and half of university and engineering graduates are female, this should be a lesson to anywhere not doing all it can to bring the best of talent to actualisation.”

I Write Things.
Related ItemsEntrepreneurEntrepreneurshipFemale Entrepreneurs
← Previous Story How To Be Yourself And Build Your Brand On Social Media
Next Story → The One Quality All Successful People Have In Common