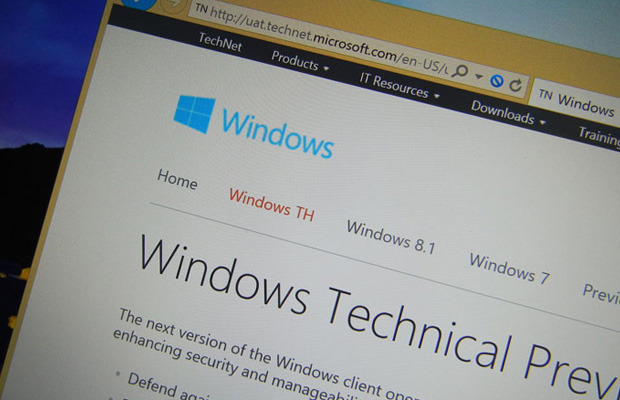 Microsoft is expected to name its upcoming Windows release next week, but the company has accidentally listed a “Windows TH” site a little early today. Windows TH presumably stands for Windows Threshold, the code name of what many expect will become Windows 9. On a “Windows Technical Preview for Enterprise” site, Microsoft lists the Windows TH name, alongside details on “the next version of the Windows client operating system.” While Microsoft will detail Windows Threshold on Tuesday at an event in San Francisco, the company isn’t expected to release a preview of the operating system until early October.

The Windows TH name is likely a placeholder, or it may indicate the company isn’t ready to fully name its next version of Windows. Microsoft’s early leak of the Technical Preview site also suggests the company may be preparing to launch the preview as early as next week, shortly after its event. There are links to “what’s new for IT professionals,” but the pages do not appear to exist just yet. Windows Threshold Preview is expected to include the new Start Menu, a notification center, a virtual desktops feature, and some UI changes to the desktop.

Microsoft is also launching a “Windows Insider Preview Program” that will provide enthusiasts and IT professionals with the latest preview builds of Windows Threshold as soon as they’re available in exchange for feedback on changes and features.

I Write Things.
Related ItemsMicrosoftTechnology
← Previous Story Yahoo Directory, Once The Center Of A Web Empire, Will Shut Down At Year’s End
Next Story → Multidirectional Invisibility Cloak Created By University Of Rochester Researchers