Home / News / Technology News / Intel Wants To Give You One Of 8,000+ Processors

Intel Wants To Give You One Of 8,000+ Processors 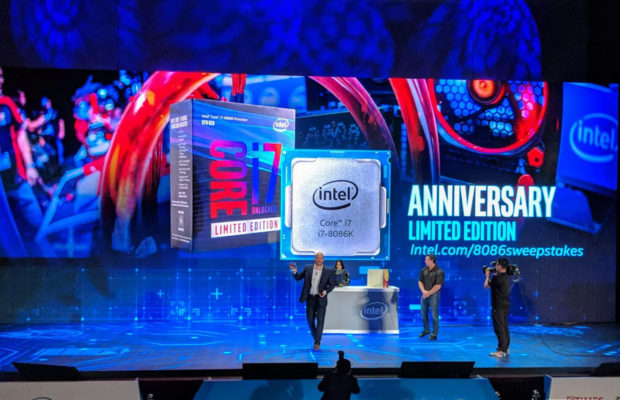 At Intel’s Computex 2018 in Taipei, Taiwan, the company announced an 8th Gen Intel Core i7-8086K Limited Edition processor to celebrate the 40th anniversary of the x86 architecture. The Intel 8086 microprocessor “formed the foundation for modern computing,” according to an Intel news fact sheet.

The Intel Core i7-8086K Limited Edition processor represents the company’s first 6-core, 12-thread processor with integrated graphics in an 1151-pin package supporting a 64-bit instruction set. It is also the first Intel processor to deliver up to 5.0 GHz single-core turbo frequency out of the box, fully unlocked for overclocking, according to the fact sheet. This higher frequency allows for improved single-threaded performance and consistently high frame rates, which will be beneficial for content creation applications.

The Intel Core i7-8086K Limited Edition processor is not yet available to purchase, but as part of the anniversary celebration, Intel is giving away 8,086 of them.

The contest is open to residents of the US, Canada (excluding Quebec), UK, France, Germany, South Korea, Taiwan, Japan and China (excluding Hong Kong). Entries will be open for just 24 hours, starting June 7 at 5 p.m. PST and closing June 8 at 5 p.m. PST.

No purchase is necessary to enter the contest, but entries do have to be submitted via an online form that will appear here once the contest is open.

In the US, 2,086 processors will be available to win, according to Intel. Winners will be notified via the email address they provide on the entry site within two weeks. Delivery of the processor could take up to six to eight weeks after winners are contacted and can confirm delivery details.

The processor will be available for purchase on June 8, the actual anniversary date of the first Intel 8086 processor. As this is a limited edition processor, some have speculated that Intel will only product 50,000 units. Pricing information is not yet available, but the sweepstakes lists the average retail value of the processor at $425.

I Write Things.
Related ItemsIntelTechnology
← Previous Story macOS 10.14 Appears To Be Getting A Dark Mode
Next Story → Lebanese WhatsApp Users Beware – You Could Be Next