North Can Become South In Less Than 100 Years - TechGeek365

North Can Become South In Less Than 100 Years 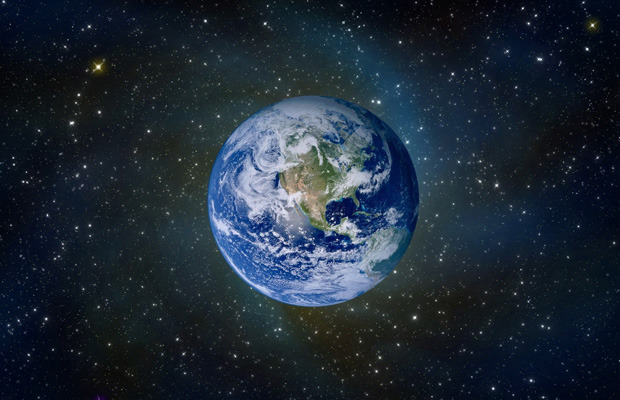 Schematic illustration of the invisible magnetic field lines of Earth.

A recent discovery has shown that the Earth’s magnetic reversal could happen much quicker than had been expected. US scientists say the North and South poles can swap their positions in less than a century, which would carry some danger for humans.

The Earth’s magnetic field maintains the same intensity for up to a million years, but it occasionally weakens and reverses direction – a process that scientists previously thought took thousands of years.

But now researchers at the University of California Berkeley have discovered that the last magnetic reversal to date actually occurred very quickly – roughly over a human’s lifespan.

An international study led by US scientists examined sediment layers in an ancient lake in the Sulmona basin in Italy, east of Rome. The sediment consists of magnetically sensitive minerals that have traces of Earth’s magnetic field lines“frozen” into them, revealing their past directions. 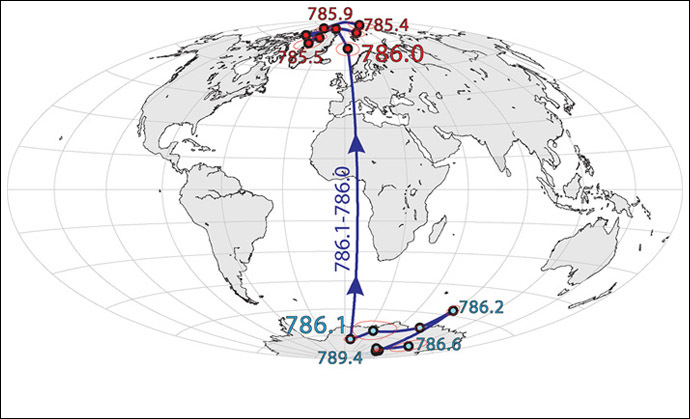 Map shows how the north pole wandered around Antarctica for several thousand years before flipping 786,000 years ago to the orientation we know today, with the pole somewhere in the Arctic.

The team was able to date the layer coinciding with the magnetic reversal at approximately 786,000 years ago, saying that this date is far more precise than those from previous studies. Their findings are to be published in the November issue of Geophysical Journal International.

“It’s amazing how rapidly we see that reversal,” the study’s co-author Courtney Sprain, a University of California Berkeley graduate student, said in a press release. “The paleomagnetic data are very well done. This is one of the best records we have so far of what happens during a reversal and how quickly these reversals can happen.”

The researchers used the argon-argon dating method, which is widely used to determine the age of rocks, as well as ash layers above and below the sediment layer, recording the last swap of poles.

“What’s incredible is that you go from reverse polarity to a field that is normal with essentially nothing in between, which means it had to have happened very quickly, probably in less than 100 years,” the director of the Geochronology Center of the university, Paul Renne, has said. “We don’t know whether the next reversal will occur as suddenly as this one did, but we also don’t know that it won’t.” 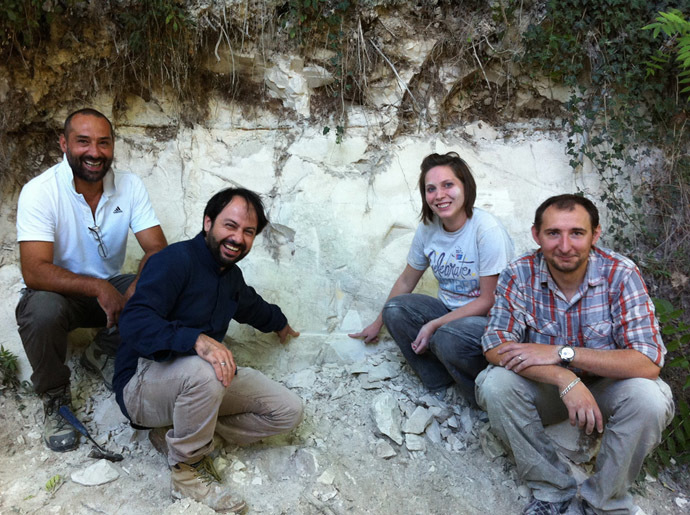 The international team of scientists sitting next to an outcrop in the Sulmona basin of the Apennine Mountains that contains the Matuyama-Brunhes magnetic reversal.

The study follows recent conclusions that the intensity of Earth’s magnetic field is currently falling. Data collected by a European Space Agency (ESA) satellite suggested in September that the field is weakening 10 times faster than scientists originally thought – by about five percent a decade. This led the ESA to conclude the impeding magnetic reversal is about 2,000 years ahead – but now even this figure will have to be revised.

“We don’t know whether the next reversal will occur as suddenly as this [previous] one did, but we also don’t know that it won’t,” Renne said in a statement.

The magnetic record shows that the sudden 180-degree flip of the field was preceded by a more than 6,000-years-long period of instability.

While scientists assure that the magnetic reversal will not affect the humans’ life tremendously, it could potentially wreak havoc with the electrical grid, generating currents that might take it down.

Even more crucially, the magnetic field protects the Earth from harmful cosmic rays and the so-called solar wind – energetic particles coming from the sun. The weakening of the field before a reversal could thus increase cancer rates, scientists believe – with an even greater danger to life if flips were preceded by long periods of unstable magnetic behavior.

Unfortunately, the scientists don’t yet have enough data to predict the full extent of the consequences.

“We should be thinking more about what the biologic effects would be,” said Renne.

I Write Things.
Related ItemsEarthRandomScience
← Previous Story He Walked 10 Miles In A Snowstorm For A Job Interview, What Happens Next Will Make You Cry (Video)
Next Story → This New Battery Charges To 70% In Two Minutes, And Lasts For 20 Years