Scientists Are Working On A Breath Test To Diagnose Stomach Cancer 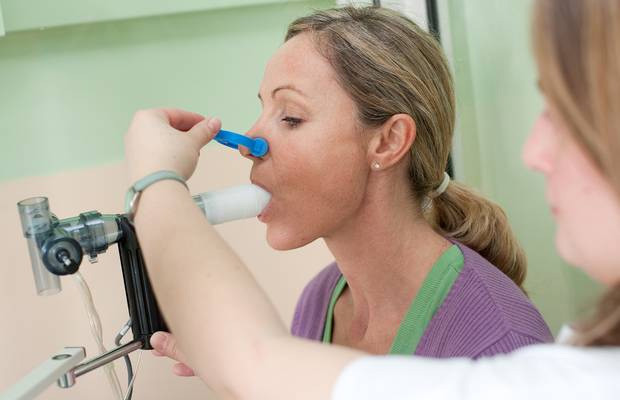 A new technology that analyzes exhaled breath could one day diagnose stomach cancer in a matter of minutes. The test interprets patients’ “breath prints” — unique patterns of molecules that we breathe in and out everyday and reflect conditions in the body. Similar tests have already been developed to detect other types of cancer, but scientists say the method is especially important for stomach or gastric cancer because of the disease’s relatively low profile in the West.

In a study published in the journal Gut, a group of scientists led by Hossam Haick tested breath samples from 484 Latvians. Close to a hundred of these people had been diagnosed with stomach cancer but hadn’t started treatment, while the rest were sorted into groups by their risk for developing the cancer. The breath test — known as a “nanoarray analysis” — was 92 percent accurate when it came to identifying patients with cancer among symptomatic and non-symptomatic patients. The scientists involved say it could replace the more invasive methods currently used to identify the disease.

Stomach cancer can only be cured with invasive methods like surgery, and even then, only if doctors recognize it early. While stomach cancer is the fifth most common type of cancer globally, it’s only the 16th most common in the US. (This is due to a clutch of factors, including, but not limited to, diet and the presence of common bacteria named Helicobacter pylori.) Usually by the time it’s identified, the cancer has already spread to other parts of the body. This means that in the US, for example, only 28 percent of individuals with the disease survive five years after diagnosis. Only two countries —Japan and South Korea — currently screen for stomach cancer, mostly because the disease isn’t as common in the West.

Approximately two-thirds of gastric cancer cases are diagnosed late, says Marcis Leja, one of the scientists behind the new screening method. Globally, he says, there are close to a million new cases every year, and that as cancers go, it’s quite a “neglected” problem. Current screening methods involve inserting a camera down the throat into the stomach. However, if individuals don’t have any symptoms for the disease, then they’ll be unlikely to want to undergo these sorts of invasive examinations, says Leja. He adds that the new breath analysis method is cheaper, faster, and easier to perform than existing methods.

To take the test, patients simply exhale into a tube, with this sample fed over a series of sensors. These sensors are made of two components — an organic film that reacts to the presence of certain molecules, and a second layer that converts this reaction into an electrical signal. In the future, say Haick and Leja, these sensors will be built directly into the breathing tube, allowing doctors to administer the test like a breathalyzer, with the procedure taking only minutes.

Although this may sound like a roundabout way to examine what’s going on inside the body, these sorts of tests have actually been in use since Roman times. Liver failure, for example, meant the breath had a fishy odor, while diabetes was associated with a sweet, acetone smell.

To test the new technology though, scientists were using more than just their sense of smell. To verify the findings of the nanoarray analysis, the breath samples were also examined using mass spectrometry. This process can accurately identify different chemicals, but is too expensive and time-consuming to be used to screen for cancer. Instead, the mass spectrometry allowed the scientists to create a template of what patterns of molecules the nanoarray analysis had to look for. “The [breath test] doesn’t identify particular substances,” Leja explains. “Instead it allows us to identify the pattern. It’s taught to discriminate between disease and non-disease and other cases.”

While the scientists involved described the test’s accuracy as “excellent,” the technology did have a 2 percent rate of false positives (that is, in 2 percent of cases it said the patient had cancer when they didn’t). However, the nanoarray analysis also proved adept at identifying precancerous stomach conditions. “Identification of high-risk conditions is a secondary task, although from the clinical point could be even sometimes more important,” Leja says.

“It has a lot of promise but it’s very preliminary,” said Dr. Jean-Marie Houghton, a spokesperson for the American Gastroenterological Association from the University of Massachusetts Medical School. “It needs to be tested out in larger and more diverse populations, but as an early go it’s very encouraging.”

But breath analysis won’t become widespread unless it’s accurate among large portions of the population, Houghton says. It’s likelier that the test would become a supplementary tool, deployed in situations where patients’ environmental conditions or genetic disposition suggests they might be at risk of having stomach cancer, but when they don’t actually show any symptoms. “If you wouldn’t otherwise be doing an endoscopy, I can see this being very useful,” says Houghton.

Leja, Haick, and the rest of their team led by the doctorate student Haitham Amal are already working on the next generation of the device. “Definitely we have to prove that the study works in other populations, and that will take a couple of years even in an optimistic scenario,” says Leja. “But in absolute figures, gastric cancer is not going to decline in the foreseeable future.”