The smart spoon is a fantastic idea, on a number of levels. To be fair, Google didn’t come up with it; the original “smart spoon” actually debuted more than a year ago, designed by a startup named Lift Labs — one of those names that just screams that the company was designed from the ground up for sale to a larger corporation. Regardless, Google saw the technology’s promise, and this week announced that it has bought the company and its LiftWare spoon, a surprisingly sophisticated piece of table-tech that steadies itself even in a violently shaking hand. The smart spoon could improve the lives of millions of people dealing with Parkinson’s and similar illnesses, but it should also pay dividends for Google’s many other ambitious projects.

Google’s new spoon is technically called a “tremor-canceling” invention, which means that it reads incoming movement and uses onboard motors to offset that movement and keep the bowl of the spoon as stationary as possible. It has to do more than just mechanical shock-absorbing, as it must dynamically undo the movement caused by random nerve firing, while also identifying and not trying to offset the user’s attempts to move the spoon toward the mouth. I can only imagine the frustration a person must feel when having such trouble merely eating cereal, and conceptually simple innovations like this are a great use of Google’s seemingly unlimited acquisitions budget.

Still, it’s the technology itself that makes this a brilliant purchase. Google has spent the past several years gearing up for a real push into home robotics, and robotics in general, and they’ve managed to pick up a full-featured, well tested stability technology that could be vitally important. Google hasn’t announced any figures for the purchase, but whatever they paid it’s likely too little; stabilizing tech could help speed or improve finicky hand assembly in factories, while many surgeons would certainly welcome the chance to cancel any tiny, involuntary swaying of the hand. Active stability tech has been around for some time, but it tends to be expensive and complex; LiftWare has a complimentary hardware-software system that gets the job done well, out of the box, in an easily generalizable package. 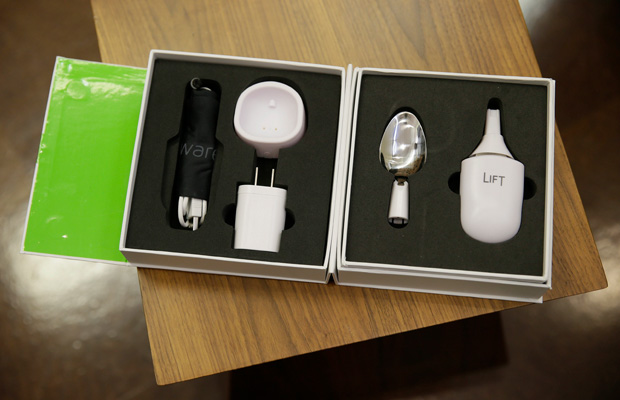 We humans do some basic dynamic stabilization ourselves — this is why you can drink a drink while walking. We unconsciously flex or relax muscles in the back, shoulder, and arm to compensate for movement propagating up through the hips — but robots have trouble doing this effectively. The technology behind LiftWare could end up helping a robot carry a dozen eggs home from the grocery store, or even underpin tech letting a crane stay stable during an earthquake. Google has filed the new acquisition under its GoogleX brand, which is also working things like blood glucose-monitoring contact lenses and medical nanobots; you can bet they are dreaming bigger than the G-Spoon, and plan to apply the new technology widely.

Even if it is only restricted to tremor-canceling tech for people with nerve problems, though, this is exactly what we should be seeing from a company that’s struggling to stay true to the dictum, “Don’t be evil.” Both strategically and ethically, Google’s done very well this week.

I Write Things.
Related ItemsGoogleLiftWareRandomSmart Spoon
← Previous Story Next Generation Elevator Will Use Magnets Instead Of Cables
Next Story → Harvard Researchers Have Successfully Created Human Pain