Smart Tampon Reminds You When It's Time To Tug [VIDEO] - TechGeek365

Smart Tampon Reminds You When It’s Time To Tug [VIDEO]

Menstruation. It’s a reality that 50% of the populous experiences but a topic that doesn’t get a lot of discussion — especially in tech circles.

A new startup is hoping to change the conversation with a smart tampon called my.Flow, intended to help manage and track menstruation needs.

As Engadget points out, my.Flow isn’t so much a smart tampon as it is a Bluetooth sensor that connects to a traditional tampon.

But that sensor is pretty cool. It talks to a smartphone app that lets women know when their tampon is saturated and needs to be changed. (For some, there’s nothing more embarrassing than leaking unexpectedly all over your new pants.)

The app can also be used to track when your period starts and stops, as well as what days have the heaviest flow.

The app also has built-in alerts to let you know when you need to change your tampon, regardless of flow. Doctors say that women should only wear a tampon for eight hours or less, in order to avoid toxic shock syndrome (TSS).

My.Flow was founded by Amanda Brief, who came upon the idea during a wearables project at the University of California, Berkeley. Field then went to the Chinese-based hardware accelerator HAX. 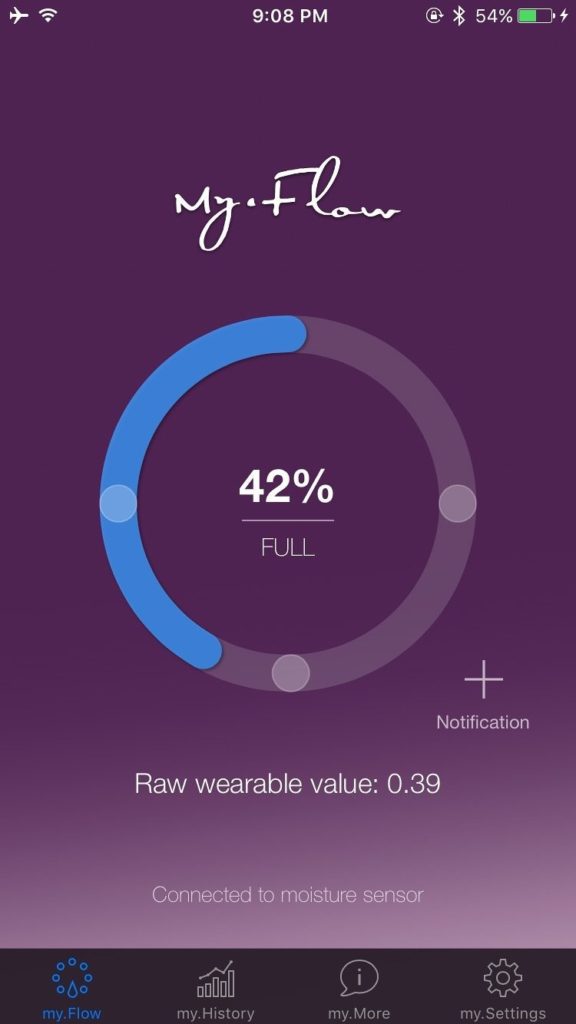 The only downside to the project — which is expected to release in 2017 and is seeking funding — is the way it connects. The tampon itself is like a traditional tampon, but it features an extra-long, insulated string. That string then literally connects to a key fob-sized Bluetooth sensor that attaches to your waistband.

Although I appreciate that it would be prohibitively expensive (not to mention, kind of weird) to have actual electronics embedded into a cotton tampon, being required to essentially belt your tampon to your clothes seems like a step backward.

As Engadget points out, self-adhesive maxipads were one of the best inventions of the 20th century. Going back to the Judy Blume-era of sanitary belts (even for a tampon) is something many women would avoid.

Moreover, the price of the my.Flow might be an issue. In addition to the sensor, which will reportedly sell for $50, the tampons that work with the sensors will cost a few dollars more than Tampax or Playtex. And you’ll need to use those tampons to get the benefits of the sensor.

Still, I can’t hate on the idea – or the solution – that my.Flow is trying to solve. Menstruation stigma is still a very real thing, especially true in places outside of the Western world.

We have whole industries dedicated to helping men sexually gratify themselves using the latest tech. It’s nice to see a project aimed at women’s needs.

Based on the prototype seen by Engadget and The Guardian, I don’t think the first iteration of my.Flow quite solves the problem, but I love the idea of connected tech that makes periods easier to track and leaks less of an issue.

Would YOU use a smart tampon? Let us know in the comments.