Snapchat Thinks Its New Emoji Feature Will Change Your Life

Snapchat peeved users in January when it yanked its popular “best friends” feature, which showed the people you snapped with the most.

Now, the ephemeral messaging app is betting that a major update rolled out Monday, which replaces the feature with emoji characters, will “change your life.”

According to a blog post buried inside Snapchat Discover, a bunch of emoji will start popping up in your friends list starting on Monday. The app update also introduces two other features: A new low-light camera mode serves up improved shots snapped in darker settings, and a section called “Needs Love” now appears under “Recents,” encouraging users to send snaps to people they haven’t interacted with in a while.

The six emoji “weren’t just our favorite ones (shout out to the poop emoji), they actually mean something super-important — they break down your whole squad,” the post read. Rather, they represent different levels, and will show up alongside Snapchat users with whom you snap the most. The company used Beyoncé for its brief explainer: 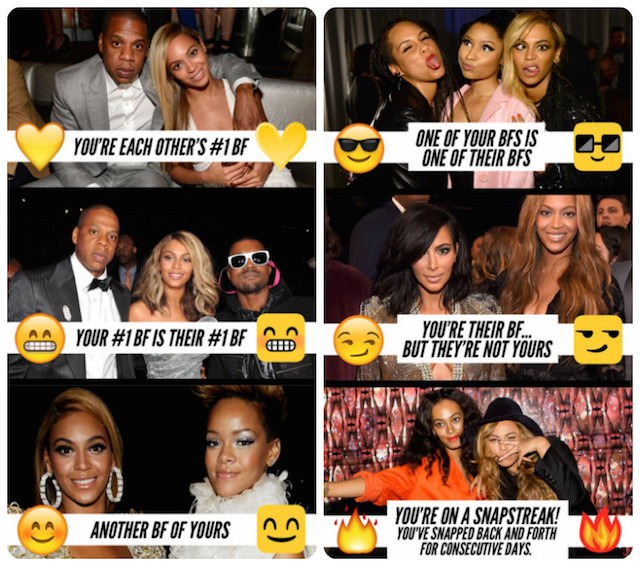 But unlike the old, relatively minor “best friends” feature, which was always turned on and publicly available to anyone you were friends with, only you can see the emoji. The days of being able to stalk your friends and see who they snapped with the most — ex-boyfriend? coworker? — are pretty much over.

The removal of “best friends” in January caused an uproar from users and even forced CEO Evan Spiegel to explain himself.

The new emoji feature is the latest in a series of moves suggesting Snapchat is getting more serious about privacy and security. Last May, the startup settled charges with the Federal Trade Commission that alleged Snapchat deceived users about the “disappearing” nature of their photos. Then, in October, hackers leaked nearly 98,000 photo and video files to The Pirate Bay.

Snapchat announced last week it was ramping up security and restricting access to outside developers.