Home / More + / Something Really Big Is Going To Happen On Friday, And Here’s How You Can Watch It

Something Really Big Is Going To Happen On Friday, And Here’s How You Can Watch It

A total solar eclipse will take place tomorrow as the Moon moves between the Sun and the Earth. Although only a small part of the world will experience the full eclipse, residents of Europe and even North Africa and Asia can enjoy a partial eclipse in the morning. Astronomers say the eclipse is set to be particularly striking, as the Moon is currently at the point of its elliptical orbit closest to the Earth — a configuration technically known as the perigee-syzygy of the Earth-Moon-Sun system but more memorably dubbed the “supermoon.”

As ever with eclipses, people should not look directly at the Sun at the risk of permanent eye damage. Regular sunglasses aren’t enough protection either, and the best method to watch the eclipse safely is to make a basic pinhole projector or use wear eclipse glasses. Experts have said that anyone attempting to take an eclipse selfie should be especially careful. The UK’s College of Optometrist warns that even a brief glance over someone’s shoulder at the Sun could lead to burns at the back of the eye. 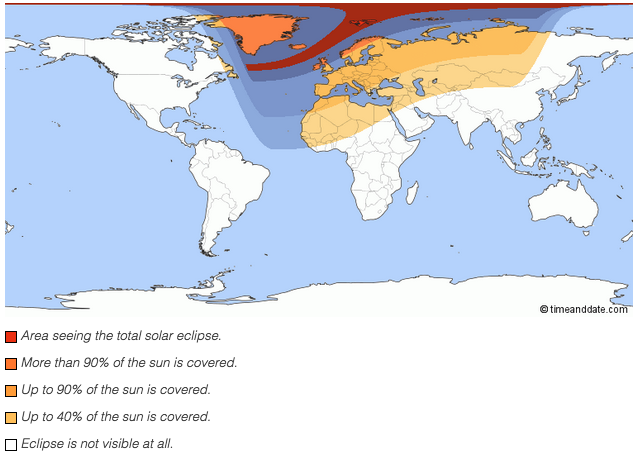 Budding astronomers from outside of the affected areas can still watch the eclipse though. The entire event will be broadcast online via the Slooh Community Observatory, with the webcast kicking off at 04.30 am ET.

I Write Things.
Related ItemsAstronomyNASARandomScienceSpaceTechnology
← Previous Story Passenger Footage From The Lufthansa Flight That Turned Back To Beirut After Engine Failure [VIDEO]
Next Story → Burger King’s Whopper-Scented Perfume Could Be Too Gross To Be True