Spoof Apple Site Touts Bendable iPhone 6 As A Plus 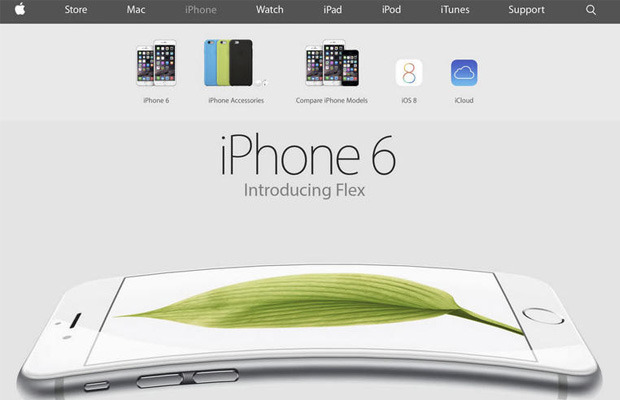 Some iPhone 6 and 6 Plus users are complaining of a new bug in which their phones bend under pressure, especially when stored in their pockets for long periods of time. But is this a bug or just an undocumented feature? One tongue-in-cheek webpage touts it as a feature called Flex.

Spotted on the photo sharing website imgur.com, the page displays an image of a bent iPhone 6 with the tagline: “Introducing Flex.” The text below says: “Apple’s revolutionary patent aluminum alloy lets users create a more enjoyable viewing experience by molding the iPhone.”

The curve in the imaged iPhone 6 brings to mind intentionally curved phones like Samsung’s Galaxy Round and LG’s G Flex. But despite the spoof page’s claim that Flex is an undocumented feature, it seems to be more of a flaw in the iPhone 6, possibly due to the device’s thin, aluminum body.

Photos have started to pop up online showing bent iPhone 6 units, with people complaining that there devices can’t withstand the wear and tear of being kept in a pocket for too long. Users chiming in on the MacRumors forum said the flaw seems to affect the new iPhone at the top near the volume buttons. One user who posted a photo of a bent iPhone 6 Plus said the phone bent after around 18 hours in his pocket.

Apparently it’s not just your pocket that can bend the new iPhone. You can do it yourself. A video posted on YouTube on Tuesday by Ubox Therapy showed how someone was able to intentionally bend an iPhone 6 Plus near the volume buttons just by applying enough pressure. The person who performed the bend maneuver said the problem seemed to stem from a weakness near the volume cutout buttons.

The bend isn’t nearly as dramatic or as stylish as the one seen on the Apple spoof page. Instead, it’s more subtle and rough but still quite noticeable, at least in the photos and videos posted online.

However, the so-called “bend-gate” issue is not a new one, according to Cult of Mac, which said that similar problems were found in the iPhone 5S, iPhone 5 and iPhone 4S, as well as phones from Samsung, Sony, HTC, BlackBerry and Oppo.

Of course, one way to avoid such bending is to make sure your phone is safely ensconced in a secure and durable case, especially if you’re going to keep it in your pocket for countless hours.