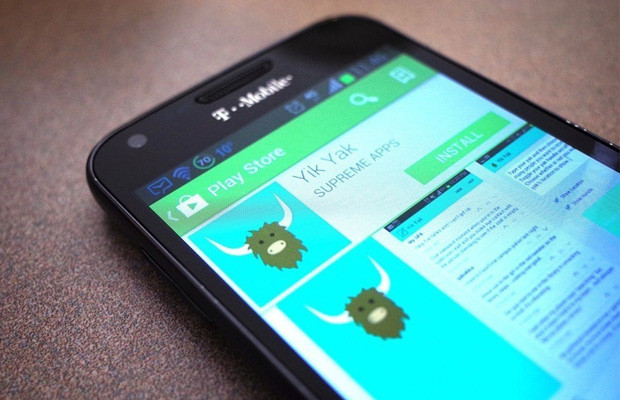 Yik Yak is in the early stages of testing the feature on some college campuses for limited periods of time, sometimes as brief as several hours, in order to get feedback from users, according to sources familiar with the matter.

“Yakkers have told us that they’d love the option of adding a picture to their yak, so this is something we’re currently testing out on a handful of campuses,” Yik Yak CEO Tyler Droll said in a statement. “There have been some great photo yaks so far, depicting everything from questions to sports victories to random funny moments. We’re excited to see what these communities share.”

Uploaded photos must be snapped from inside the app. (Photos from your camera roll need not apply.) Photos are moderated and approved by Yik Yak employees, which can result in a delay before the image shows up in feeds. Any photos featuring faces, nudity, or behavior the moderator deems “inappropriate” or “illegal” won’t make into feeds.

Yik Yak has no official plans to roll the photo feature out to all users yet, even if doing so has the potential to fuel user engagement and build the app’s user base.

The Atlanta-based Yik Yak, which was launched in 2013 by Furman University grads Tyler Droll and Brooks Buffington, lets users anonymously post text-based messages to a virtual bulletin board. The startup has raised more than $73 million to date, including a $62 million Series B round in November at a valuation in the “low hundreds of millions of dollars” — a staggering amount for a company that is so young.

Yik Yak currently has 3.6 million users, many of whom are high school and college students across 1,500 colleges, per a Business Insider report this week. Of those users, 22% of them — or roughly 792,000 people — publish posts to the app. Adding photos into the mix would make the user experience that much more compelling, since the app only allows users to publish text.

“The Internet has always gone from from text to rich media,” explained David Chao, cofounder of DCM Ventures, a Yik Yak investor. “For Yik Yak, the challenges are around, ‘How do we make sure that the modality of the community continues to remain positive?'”

Yik Yak doesn’t want to court the kind of controversy it faced last fall when a Los Angeles high school went into lockdown following ominous threats published on the app.

Photos would introduce a potential landmine and could expose users to problems like bullying and sexual harassment, issues that apps like Secret faced. There’s also nudity to deal with, which Vine largely nipped in the bud last year when it banned sexually explicit content. Yik Yak is obviously aware of such issues, hence the testing period with small groups for short periods — and the need for manual approval first.

But should Yik Yak eventually roll out photo-sharing to all users, the startup would likely have to find another way to police content: Employee moderation may work in these beta tests, but isn’t a practical solution that will scale as more people sign up and publish posts.