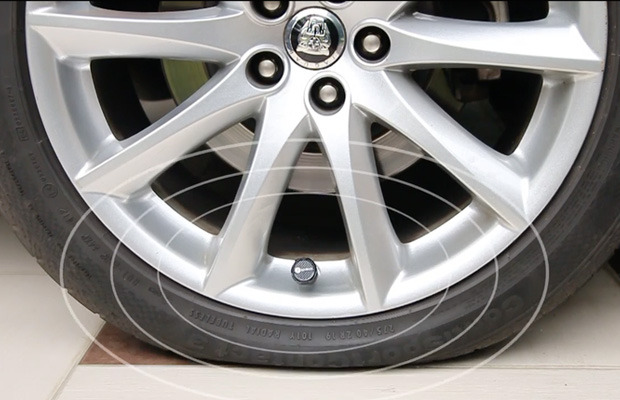 Now, a new invention making a run on Indiegogo could play the role of a nervous parent for thousands of drivers out there by continuously monitoring tire pressure and relaying that information via Bluetooth to a smartphone or in-car receiver.

The device is called Fobo Tire, a name that made no sense to me until I asked one of the creators what “Fobo” means. “Fobo means ‘for our better world,'” said Jonathon Ho Chang Tih, senior manager of Salutica (the Malaysian company making the device). Ho indicated that the last “O” comes from the second letter of the word “world.”

To use the Fobo system, drivers would unscrew the little black caps on their tires’ fill valves and replace them with round Fobo tire sensors. Each sensor continuously monitors the pressure in its assigned tire, then uses Bluetooth to relay that information via smartphone app or to an in-car receiver. Because Bluetooth is a low-energy technology, the creators say the sensors will last about two years before the batteries need to be changed.

“The sensors work 24/7,” Tih told Crave. “When it detects a flat or deflated tire, it will send out Bluetooth signals continuously alerting the user of flat tire. As long as user is within the typical Bluetooth range of 10-30m (depending on surrounding walls, etc.), the smartphone will pick up the alert signal.” If a user is out of range, the alert will sound when he approaches the car and prevent him from driving a potentially dangerous vehicle.

What about theft of the sensors? That’s a question that’s come up quite a bit in the forums on Fobo’s Indiegogo page. The creators say that if the sensors get stolen, they won’t work with another system, but that didn’t seem to allay everyone’s fear. So the Fobo folks are working on a lock nut that can only be removed with a special wrench that will help make the sensors as theft-proof as possible.

Maintaining properly inflated tires can not only improve gas mileage, and keep treads from wearing out prematurely, it can keep vehicles safe. “Incorrect tire pressure will compromise cornering, braking, and stability,” says the website of NPR’s “Car Talk” show. “And in the worst-case scenario, improper tire pressure can lead to tire failure — and a serious accident.”

So it seems like mom and dad were right. And it’s certainly a message to which people are responding. The Indiegogo campaign, which still has 38 days remaining, has already cruised past its goal of $28,000 with pledges in excess of $74,000. The $75 early-bird specials are all sold out, but it’s still possible to snag a set of the sensors plus the in-car unit for $90.