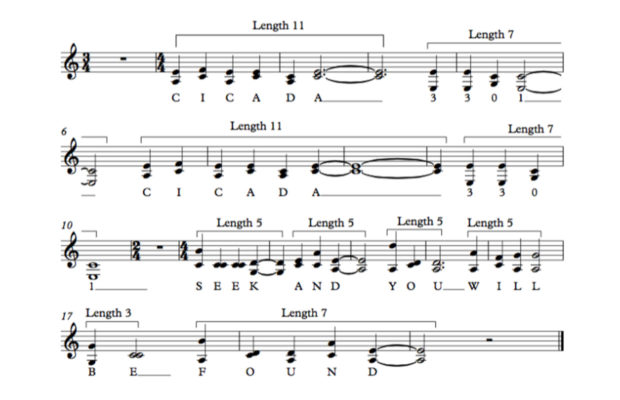 I’m a coder. I’m also a musician. I have been following the Cicada puzzles for the past year or so. I started noticing certain musical patterns that I think are a cryptogram in some of the videos they have posted and wonder if anyone else has noticed the same thing.

In music, when you have two notes playing at the same time it’s called a dyad. Like if you played middle C and the G above that, it’s called a perfect 5th. I noticed certain dyads in the Cicada music that didn’t follow typical musical patterns. Not only that, but each phrase was a prime number of beats in length, something the Cicadans seem to be fond of. I began to wonder if they were words and the individual notes were characters. Is it possible that the Cicadans are making a musical language to communicate with us that no standard code-cracking algorithm could break?

Now there’s a lot going on in these pieces besides the dyads. And the part that I think is a cryptogram is sometimes only part of the piece. But once I started looking at the most common dyads as letters I started seeing they following typical letter distribution patterns for English.

Seek And You Will Be Found

This piece posted on 3/14/16 was the key to everything else:

I noticed that the first musical phrase had six notes (followed by a five note rest making it 11 beats total, a prime) and the next phrase had four notes (followed by a three beat rest making it 7 beats, a prime). Cicada = 6 characters; 3301 = 4 characters. The next phrase does the exact same thing, despite the bass note changing. The ending is a reprise of the same 4 “words”.

But the middle section has different series of musical “words” of length 4,3,3,4,2,5 (plus rests to make them primes). It seems obvious when you see the title of the video, “Seek and you will be found”, and remember the tweet on 1/6/16 included the same words.

Here is my transcription with explanations.

The Music Is The Message

This next piece posted in 6/1/16 is even more interesting:

In this case, there is a piece that doesn’t seem to be encoded in any way I can recognize. But, suddenly, in the middle there is another suspiciously odd section at 1:57 on the video that includes musical words of 3,5,2,3,7 letters (plus rests to make them prime length). There is also a peculiar high-pitched sound between the words that most definitely is not an insect. If you slow down the middle by two octaves (both 2 octaves lower in pitch and four times as long) and turn it backwards you can audibly hear two women singing the words “The music is the message”, the same length words as the dyads. Not only that, but if you go back to the beginning of the video and listen to the insect-like sounds and drop THEM down three octaves and turn them backwards, you again get someone singing these same words.

Further, the cryptogram/code is consistent with the letters from the first message.

Here is my transcription with explanations.

The Numbers Are The Direction

This painting has an embedded link to the song download on the deep web. I’ve uploaded it here and you can download it from this link:

Like the one on 6/1, there is a middle section that is stylistically different from everything. This has words of 3,7,3,3, and 10 letters, consistent with The Numbers Are The Direction, both the title of the video and included in the 1/6/16 tweet. Note the reprise of the Cicada 3301 cryptogram at the very end.

Is it possible that the message has something to do with geo coordinates?

Here is my transcription:

So, by now we have enough to construct an entire alphabet plus numbers. With the letters we have we begin to see a pattern emerging: the dyads are not alphabetical, but are in order of the most commonly used English letters: ETAOIN… Then, at the end, there are the numerals 0-9. This is actually very smart as it means the most used letters correspond with the most used intervals (smaller intervals being more common than large ones). This means a typical word will sound more “melodic”.

It should also be noted that, thus far, all the messages are in the key of C. But there is no reason they could not be transposed to other keys as well.

Here is my transcription of the full alphabet and numerals with the “guesses” in red. The order may look arbitrary but it is based on how often each letter appears in English. E is the most common letter, followed by T, then A, O, I, N, and so forth. This is immediately followed by the numbers 0 through 9:

There are too many alignments here for this to be coincidence. What’s great is that besides Cicada being able to communicate in a unique way with us, we can start sending each other messages in musical code, too! For starters, here’s my name in “Cicada Notes”:

I Write Things.
Related ItemsCicadaCicada 3301
← Previous Story Amazing Ways The Internet Empowers Minorities
Next Story → How To Avoid The Most Common Road Accidents