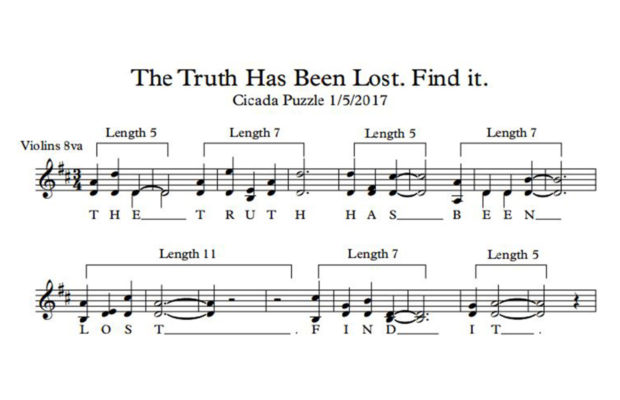 If you’re a Cicada 3301 fan by now you’ve heard about the crazy telephone booth in the middle of the Mojave desert that has a phone that only rings on seven days in January, all primes but one. (Think they miscalculated? Nah…) For those of us who can’t do the Coachella wanna-be thing we can even access it via computer. And if we do, what happens? This piece of music plays:

Yes, it’s another bit of Cicada cryptomusic! For those who missed my last installment on this for some time now, Cicada has been putting messages into music using a code made of what musicians call dyads, two notes sounding at the same time. There have been other music codes in the past, but this one yields pretty impressively musical results because, in using two notes for every letter or number instead of one, it can afford to limit the notes to more musical combinations and still have enough variation to give us the whole alphabet and numerals.

This latest installment has at least two cryptomusic sections. It starts with what sounds like an ensemble of Shofars, the ancient Hebrew instrument that purportedly brought down the walls of Jericho. Then it goes into a classical sounding section with violin and orchestra. So, far that seems like cool stuff but not encoded, afaik. But then, at 1 min 17 sec. (17 is a prime, as is 67, the total number of seconds) it changes gear and starts playing the encrypted music like what we’ve heard before. Then at 1:41 (41 is a prime, as is 101) we return to the orchestra piece. Finally, at the end there is a weird backwards part that turns out to be the old Cicada 3301 theme, but backwards. It starts at 1:59. 59 is a prime, but 119 is not. But note that the number 7 is everywhere in this year’s puzzle and 119 is 17 (a prime) times 7.

Unlike previous puzzles which had a piano-like synthesizer playing the dyads, this one has two violins. At the top of the page is my transcription of the cryptomusic section which occurs from 1:17 to 1:41. At first I was thrown because the section was in D Major – past puzzles were in C or A minor. But simply by transposing the code up a whole step we get this:

The Truth Has Been Lost. Find It.

Seven words. And the sentiment seems more appropriate than ever.

What’s great about this code is that you can easily send encrypted messages using it and there is no NSA computer that can break it. So far.

I Write Things.
Related ItemsCicadaCicada 3301
← Previous Story How To Avoid The Most Common Road Accidents
Next Story → The Genius Reason Microsoft Put Solitaire On Every Computer – It Has Nothing To Do With Entertainment