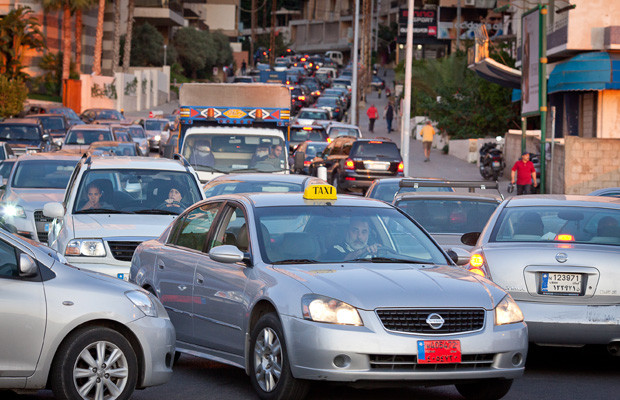 Good morning Lebanon. The day we’ve all been waiting for is finally upon us. Despite the media frenzy that had gone viral throughout the past few weeks, little has been said about the stipulations of Lebanon’s new traffic law set to go into effect starting today. Below are the main provisions expected to be enforced.

Under the new law, driving violations are divided into five main categories. Motorists are given a period of 15 days to pay the initial value of the fine which will be based on the committed offence. In case of payment default, the sum will increase for the next 15 days before the case is referred to the relevant judge.

Each driver is granted 12 points that will be deducted corresponding to the committed traffic violation. Once running out of points, the driving license will be revoked and the motorist will be prevented from getting a new one for the next six months. If all 12 points are lost again within a period of three years, the license will be invalidated for one year and the driver would be compelled to undergo a new driving test. In both cases, new driving lessons are deemed as compulsory.

Fines can range from 50,000 LBP to 100,000 LBP. One point is deducted from the motorist’s balance while some violations can even lead to vehicle confiscation.

Category 2 violations include exceeding the speed limit by up to 20 kilometers per hour, using dark tainted windows, failing to move vehicles outside the road in case of material damage resulting from a traffic collision, driving a taxicab while eating or smoking, using horn in a disturbing way or for other than reasonable warning, parking where vehicle cannot be viewed clearly, not using indicators when changing direction or turning (broken indicator lights), failing to repair broken rear lighting, sudden swerve, etc.

Fines can range from 200,000 LBP to 300,000 LBP. Two points are deducted from the driver’s balance while some violations can result in car confiscation.

Category 3 violations include exceeding the speed limit by up to 40 kilometers per hour, driving with a blood alcohol level between 0.5 and 0.8 g/l, driving between traffic lanes, driving in a way that jeopardizes others’ safety, entering road dangerously, failing to use a reflective warning triangle when the vehicle breaks down, failing to fasten seat belt, using mobile phones while driving, failing to keep a safe distance from the car ahead (distance changes based on speed), dangerous overtaking, failing to give way to oncoming vehicles before passing parked ones or other obstructions on the driver’s side of the road, failing to overtake on the left, seating a child under the age of 10 in the front seat, failing to undergo annual vehicle inspection, etc.

Fines can range from 350,000 LBP to 450,000 LBP. Three points will be deducted from the driver’s balance while some offences can result in vehicle confiscation.

Category 4 violations include exceeding the speed limit by less than 60 kilometers per hour, driving with a blood alcohol level between 0.8 and 1 g/l, driving against the direction of traffic, failing to abide by traffic signs and directions, running a red light and not giving pedestrians the right of passage, driving backwards (mainly on highways), driving with one or no number plates, driving a vehicle with an invalid registration or an expired proxy, failing to provide relevant authorities with the driver’s new address within a month, performing burnouts etc.

Fines can range from 500,000 LBP to 700,000 LBP. Four points will be deducted from the driver’s balance and some offences can result in vehicle confiscation.

Category 5 violations include exceeding the speed limit by more than 60 kilometers per hour, driving with a blood alcohol level of more than 1 g/l, doing dangerous maneuvers, running from the site of an accident, driving with an expired or no driving license, performing motorcycles stunts or acrobatic maneuvers (wheelies), etc.

Fines will range from 1 million to 3 million LBP as the violator could also be sentenced to up to two years in prison. Six points will be deducted from the driver’s balance.

Some additional information to be aware of:

Driving under the influence of drugs will cause the driver to lose all his 12 points.

It shall be unlawful and constitute a felony for any person to willfully deface, destroy, remove, cover, or alter the manufacturer’s serial number, transmission number, or engine number. A fine equal to 20 million LBP will be imposed and the violator would be sentenced to three years in prison.

The law prohibits signs, writings or any other modifications to be introduced to the vehicle’s number plate, thus imposing a fine equal to 2 million LBP. The violator would be sentenced to three months in prison and lose six points from his balance.

Whoever fails to register his/her vehicle on time will have to pay a penalty of 100,000 LBP for each day of delay.

Whoever drives a vehicle whose registration has been invalidated will be sentenced to three months in prison and will have to pay a fine equal to 1 million LBP. Six points will also be deducted from the driver’s balance.

Knowing that the new law stipulates the need for drivers to obtain a certificate from a credible driving school stating that they have undergone the required courses, a penalty of 20 million LBP will be afflicted for each forged or falsified attestation issued by the academy. The driving school will be deprived of its license should the violation reoccur.

Should a driver’s recklessness cause the death of another person, the violator will be sentenced to up to three years in prison and be forced to pay a fine ranging from 1 to 3 million LBP. If the driver’s blood alcohol level turns out to be more than 0.8 g/l at the moment of the accident, the sum would reach 6 million LBP and the prison sentence would increase to 4 years.

Whoever unveils classified data relating to the drivers’ personal information would be sentenced to six months in prison and be forced to pay a fine equal to 1 million LBP.