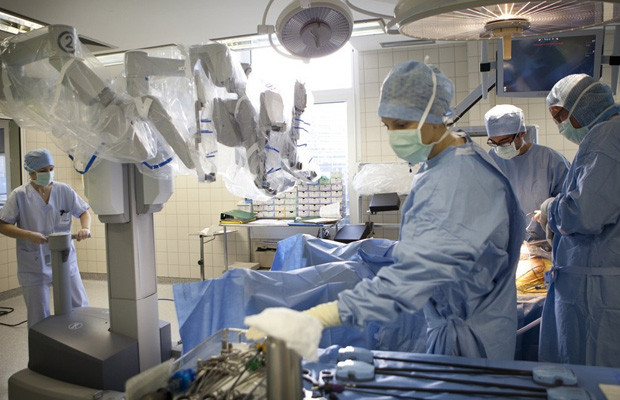 Google wants in on the operating room, at least so it can help robot surgeons to a better job.

The search giant and inveterate experimenter has partnered with Ethicon, one of the U.S.’s biggest operating room tools and equipment suppliers, to develop new vision systems that could improve results when using robotic surgery tools.

A division of Johnson & Johnson, Ethicon “makes a host of surgical products and is in the overwhelming majority of hospitals around the country,” said Johnson & Johnson VP of Media Relations Ernie Knewitz.

While the financial terms of the deal, which was announced on Friday, were not disclosed, it will let Ethicon and Google’s Life Sciences group collaborate on a robot-assisted surgical platform. A Google spokesperson said in an email that the deal doesn’t actually involve Google’s burgeoning robotics group (the company has bought up more than half-a-dozen robotics firms in recent years). Instead, Ethicon will use Google’s machine vision and image analysis software to help surgeons see more clearly as they operate (to, for instance, better highlight blood vessels).

The technology could also be used to provide surgeons using robotics tools with visual information “that’s relevant to the surgery at just the right time,” the Google rep said. Most so-called robot surgeons using, say, the da Vinci robot surgery system operate while staring at a giant screen.

Johnson & Johnson’s Ethicon division has decades of experience in surgical tool development, but has only been in the robotic surgery space for a short period of time, Knewitz noted. This deal “is about expanding our presence in that space and developing new platforms for minimally invasive surgical tools,” he added.

Google and Johnson & Johnson representatives acknowledge, though, that these are early days. The deal needs some regulatory approval and the extent of the collaboration is not fully spelled out.

And how does Google X end up in bed with Johnson and Jonson? “It’s actually a story of Silicon Valley serendipity.

Google Life Sciences, which is part of the somewhat secretive Google X division, employs roughly 100 doctors and scientists and is tasked with, as Google Life Sciences Head Andrew Conrad explained to The Atlantic earlier this year, “changing medicine from being episodic and reactive to proactive and preventative.”

This access to Ethicon, though, clearly steers the group toward more active, surgical treatment in, potentially, thousands of operating rooms around the country.

I Write Things.
Related ItemsGoogleGoogle XJohnson & JohnsonRoboticsSilicon ValleyTechnology
← Previous Story Tim Cook Is Going To Give Away His Whole Apple Fortune
Next Story → Thousands More Men Have Been Duped By An International Tinder Hack