Meet Ello, The Social Network That Wants To Be The Anti-Facebook - TechGeek365

Home / Social Media / Meet Ello, The Social Network That Wants To Be The Anti-Facebook

Meet Ello, The Social Network That Wants To Be The Anti-Facebook 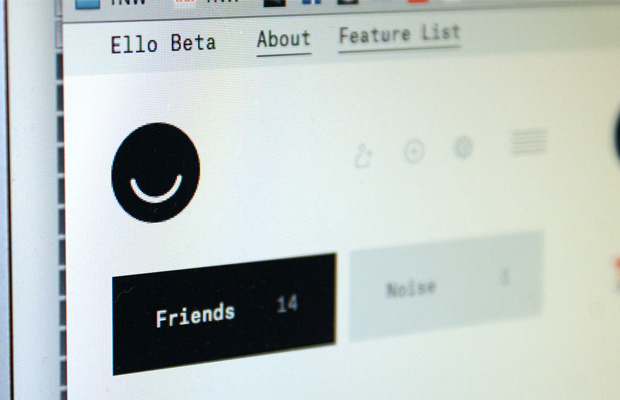 Have you ever wanted Facebook to get rid of all those ads? Paul Budnitz went out and did something about it.

Budnitz founded Ello, a social network that launched about six weeks ago and pitches itself as an alternative to the world’s largest social network. Its biggest selling point is the feature it doesn’t have: advertising.

It seems like a joke at first. Budnitz is a 47-year old designer and entrepreneur who splits his time between Vermont and New York, and whose résumé includes creating a boutique bicycle shop and a toy company. Ello’s website is sparsely filled, it has few images, and the black text on a white background looks like it’s still a work in progress.

But its dead serious manifesto is becoming a rallying cry across the web: “Your social network is owned by advertisers,” Ello says, adding that every post, friend and link is tracked meticulously by competing social networks, and all of that data is used to help advertisers send you ads. “You are the product that’s bought and sold.”

Ello’s growing popularity, pegged at more than 35,000 people asking to sign up per hour, can be explained in two ways. Ello is something new, and that alone is enough to attract many tech enthusiasts. But Ello is also making waves after a tumultuous summer for Facebook.

In June, social network giant came under fire for manipulating the news feeds of nearly 700,000 users as part of a study it conducted along with a couple universities. Not a month later, customers again cried foul when it began forcing customers to download a second application to their mobile devices in order to message with friends. Then, there were fears over the broad access to data the app asked for on their phones.

Could Ello unseat Facebook? That seems unlikely, said Kenneth Wisnefski, head of WebiMax, an advertising technology firm. But it taps into an undercurrent of dissatisfaction among some of its users. For them, Facebook “lost some of its cool factor,” he said, though it is still ingrained in the daily lives of 829 million people.

Budnitz says he has posters of Dieter Rams, James T. Kirk, and Kurt Cobain on the wall. Rams, a famous designer, represents a dedication to simplicity; Kirk, the fictional starship captain from Star Trek, represents both geekiness and how easy it was to just talk into his communicator; Cobain, the musician? He represents this concept: “We’re kinda like f— you, who says we can’t do this?”

It’s with that attitude that Budnitz embraced when he and a team of designers started programming the site in January. The idea was to build a service that offered a way to keep up with a smaller circle of friends, and without any ads.

“To me personally, to those who created this network, the Internet has started to suck a bit because people see it as an advertising platform,” Budnitz said in an interview. “We wanted to make the social network we wanted.”

Ello began to really take off in the past few weeks, when many tech enthusiasts began telling their friends and followers about the service. Now, thousands want to join.

The service looks like a stripped down version of the blog Tumblr, in which users can post items such as photos or text. On Ello, users categorize one another into two groups: “Friends” and “noise.” The latter category organizes posts into a two-column stream that’s easier to scroll through quickly.

Users join primarily by being offered an invitation from an existing user. In order to join, people must agree with its manifesto. If they click a button saying they don’t, they’re sent to Facebook’s website.

The company’s commitment to being an alternative social network shows even in how it treats user’s data. Ello customers don’t have to use their real names on the service, a stark contrast to Facebook’s policies. Ello also offers users an option to disable the company’s own analytics software that help run the site.

“Turn off analytics, and you’re totally invisible to us,” he said. “It’s a first step toward privacy.”

Ello will make money by charging users for advanced features, such as a mobile app or the ability to delegate access to business profile pages. Even a setting such as changing the color scheme of Ello’s site could come only after a user pays first. But its core features, the ability to post and read friend’s posts, will remain free.

How large Ello can get is unclear. Over the past decade, several social networks have cropped up attempting to offer a new dynamic to the industry.

App.Net, for example, was a riff on Twitter, but with two distinctly different features: users could write posts nearly twice as long as a standard tweet; and the network was ad-free, relying on subscriptions instead. It let go all of its full-time employees in May, due to a low number of subscriptions.

Path, a social network built from a mobile app, also sells itself as ad-free. Earlier this month, Path’s CEO Dave Morin said his company counts 5 million people who actively use the service daily, up from 4 million in June. There are also other services, like Diaspora, which raised more than $200,000 througha Kickstarter campaign.

But none of the would-be competitors have been able to grow to more than a fraction of Facebook’s size.

Ultimately, Budnitz said, he’s not planning to turn Ello into a multibillion dollar business. But just because he doesn’t have designs to be the next social media titan doesn’t mean he’s going to play nice, either – users will be asked to start fresh, and interoperability with other social networks will be limited.

“We wanted it to be simple,” he said. “We wanted to make the social network we wanted.”

Soon, we’ll see if it’s what other people want too.