A group of body-image activists are circulating an online petition that asks Facebook to remove a “feeling fat” status and emoji from status-update options.

The Change.org petition has amassed more than 14,000 signatures so far, and sparked a debate over whether the social network is promoting body-shaming.

“Feeling fat” currently appears as one of many preset options included in Facebook’s dropdown list of status updates. Endangered Bodies, the group behind the initiative, want the status and accompanying emoji removed because they believe it encourages body-shaming and “self-destructive thoughts.”

“When Facebook users set their status to ‘feeling fat,’ they are making fun of people who consider themselves to be overweight, which can include many people with eating disorders,” according to the petition. “That is not OK. Fat is not a feeling. Fat is a natural part of our bodies, no matter their weight. And all bodies deserve to be respected and cared for.” 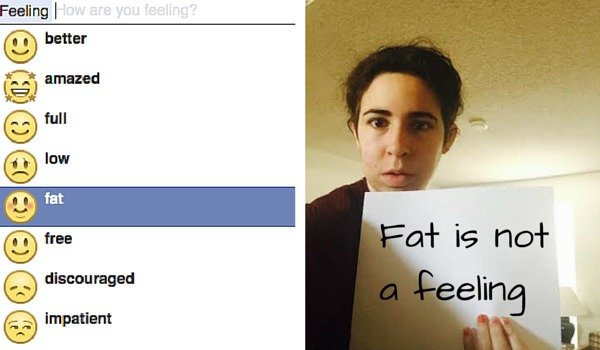 The two-week-old petition has 14,346 signatures as of this writing, just several hundred short of its 15,000 goal. On Twitter, the hashtag #fatisnotafeeling is also being used by people who are upset by the status option.

In a statement, a Facebook spokesperson said on Saturday that it offers more than 100 preset feelings based on user input:

People use Facebook to share their feelings with friends and support each other. One option we give people to express themselves is to add a feeling to their posts. You can choose from over 100 feelings we offer based on people’s input or create your own.

The social network provides resources to users who are concerned that a friend may have an eating disorder, in a dedicated help page on the topic. Facebook says it works with the National Eating Disorders Association to provide relevant information.

I Write Things.
Related Items#FatIsNotAFeelingChange.orgFacebookSocial Media
← Previous Story Facebook Is Changing How It Counts Likes
Next Story → 21 Women Whose Instagram Photos Will Amaze And Inspire You