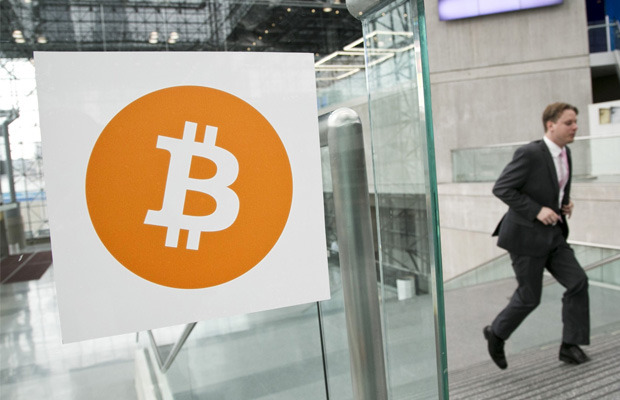 PayPal and its parent company eBay are warming up to Bitcoin, but they’re doing it oh so carefully.

On Tuesday, PayPal announced that it was partnering with Bitcoin processors BitPay, Coinbase and GoCoin to allow its merchants to accept the cryptocurrency for digital goods like online games and downloadable songs. It’s a second baby step for the payments giant toward full Bitcoin adoption after the company’s Braintree unit, a mobile payments provider, said earlier this month that it was working on a feature that would let customers of businesses like Uber and Airbnb pay with Bitcoin.

While many have been waiting to see what PayPal would do with Bitcoin–especially with eBay CEO John Donahoe speaking openly about his admiration for the digital currency–Tuesday’s announcement is more of a cautious tread, rather than a headlong leap into the Bitcoin realm. PayPal’s announcement does not mean that it will transact the currency on its own platform or that its users will be able to store Bitcoins in their online wallets.

Instead, the payments firm is letting its three partners handle the Bitcoin processing for PayPal merchants, which for now will only include businesses like online gaming companies, which offer digital goods. Scott Ellison, senior director of corporate strategy at PayPal, likened his company’s announcement to “a test” that’s been five months in the making. “Merchants were asking for Bitcoin integrations,” he said. “Digital goods were an easy way to do it first… People are comfortable paying online for those things.”

Ellison did not say which merchants would be using the integration immediately and said that PayPal would receive a fee from the Bitcoin processors for every referral, though he did not disclose the amount per transaction. The Bitcoin feature will initially be available for North American businesses only and should be available in the coming weeks.

Compared to its smaller e-commerce competitors, PayPal and eBay have been relatively slow to work with Bitcoin, with executives citing regulatory concerns as the main hindrance. Overstock.com began accepting Bitcoin in January, pairing with San Francisco-based Coinbase to let customers buy anything from laptops to reclining chairs with the digital currency. Coinbase is also the choice processor for PayPal payments challenger Square, which has has been letting local businesses in its online marketplace transact in the crytpocurrency since late March. (Square CEO Jack Dorsey told CBC earlier this month that his company is building a physical, in-store register to take Bitcoin.)

Alternatively, Atlanta’s BitPay has teamed with electronics retailers like TigerDirect and NewEgg to be their Bitcoin sidekick. BitPay Executive Chairman and cofounder Tony Gallippi noted that the new agreement to work with PayPal on processing digital goods payments seemed logical as merchants in that industry have long struggled to accept global payments for what tend to be small purchases like 99 cent .mp3 files.

“The credit card system was designed in the 1950s and not built in the way we’re trying to use it today,” he said. “If you’re trying to take a payment from a foreign country and their credit cards, you have to worry about chargebacks or security. Companies selling digital goods are then more inclined to not service foreign customers because they have more to lose than to gain.”

Because the transactions centered around digital goods will be small, PayPal is inherently limiting itself to risk with the cryptocurrency in case of fraud. Should its experiment go well, Coinbase, BitPay and GoCoin will be positioned to offer BitCoin integration for eBay and PayPal’s vast e-commerce empire, something that is expected soon given its leader’s recent posturing. In June, Donahoe told CNBC that PayPal would soon have to work in digital currencies into consumers’ wallets.

For now, that vision remains unrealized. Ellison noted however that the company is heading in the right direction.

“Here we are with two back-to-back announcements, first with Braintree and and now the payments hub,” he said. “We are certainly encouraging more [Bitcoin] use.”