Softonic Vs. CNET - Which Download Service Is Right For You? - TechGeek365

Home / Reviews / Softonic Vs. CNET – Which Download Service Is Right For You?

Softonic Vs. CNET – Which Download Service Is Right For You? 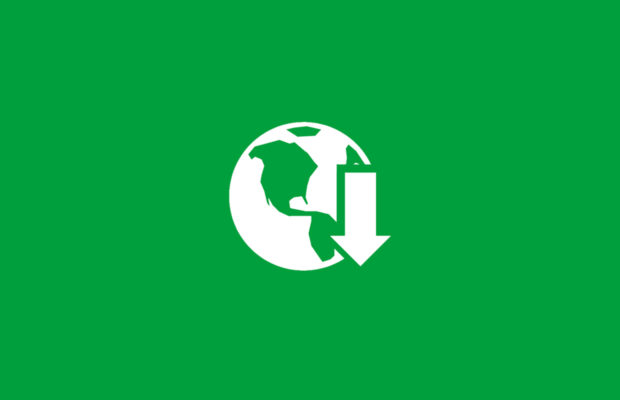 What do Softonic and CNET have in common? Both are downloading websites offering loads of freeware, and guess what? People love freeware!

Today the Internet is flooded with websites offering free downloads. These websites pop up like mushrooms every single day and the more options there are, the harder it is to make up your mind.

Softonic and CNET have been in the market for quite a while, so let’s have a look at what they have in stock.

The older of two portals, CNET, has been offering services for 22 years. It positions itself as a media website that publishes reviews, news, articles, blogs, podcasts and videos on technology and consumer electronics globally. One of the main services of the website is offering free downloads.

As for Softonic, its official page claims that the main mission of Softonic is to make software discovery and downloads reassuringly safe. The service has been running for 18 years now, and the site claims to be safe for use.

So,how do the two downloading websites compare? Let’s have a look at what the Internet community has to say!

Trustworthiness of the website and its child safety scores are two crucial factors to look at first off if we want to start shaping an idea about the two websites. Let’s look at the scores found in Web of Trust as there is a large number of users rating websites and leaving feedback here.

According to CNET’s review on MyWOT, the website has rather high ratings. It’s trustworthiness is rated at 90% while it’s child safety rating is 92%.

Compared to these ratings, Softonic scores on MyWOT lag behind a little with a score of 85% for trustworthiness and 86% for child safety, which is still considered to be rather a high score. 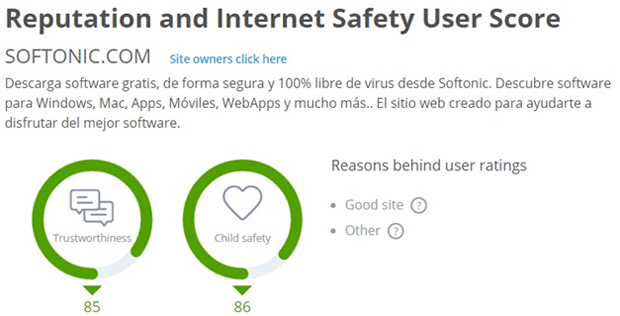 Users on this end seem to favor CNET a bit more.

One of the biggest “evils” reported by users is the fact that most downloading portals offer to use a download manager or wrapper to get access to files they are interested in. What is a download manager? It’s simply a computer program dedicated to the task of downloading stand-alone files from the Internet for storage. In fact some download managers claim to accelerate download speeds by downloading from multiple sources at once. What’s the reverse side of the coin? Each provider wants you to install their downloader, which is flooded with ads and may often carry adware.

As we looked at some files stored on CNET, it became obvious the website, along with its own downloader, offered dozens of wrappers and download managers by different developers.

What’s the issue with Softonic? We can’t say there’s much difference at all: the website is equally flooded with offers of download managers. 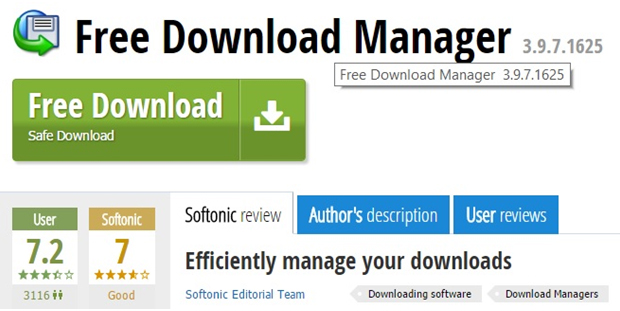 While the Softonic and CNET downloaders themselves may be just intended at landing the end user’s computer, the case with independent developers and providers is very different.

A Quora thread on this matter introduces the opinion that there are practically no more popular downloading portals left that do not offer the use of wrappers. A user (who claimed in his answer that he works for Softpedia) review states that “Softpedia is the last major download portal that provides installers “as-is”, not through a Softpedia wrapper/downloader.”

So, there’s no winner in the Softonic vs CNET battle on this end.

The Web of Trust community holds a huge pool of reviews on both downloading portals. Let’s start with looking at what users have to say about CNET. Is CNET safe or not?

Even though the website’s overall ranking is high, surprisingly most users mark the website as suspicious, given a chance to either rate it as trustworthy, not trustworthy or suspicious.

What are the main threats reported by users?

Overall, we can state that the overwhelming majority of users are happy with the service itself, but warn against using the wrapper/downloader it offers. If used cautiously, CNET won’t cause major trouble.

Now, let’s look at WOT reviews on is Softonic safe or not?. In this case, we can see that the majority of feedback is negative, with users reporting a wide range of problems.

Is Softonic safe in users’ opinion? Overall, the experience with Softonic for most users seems to be negative and more risky.

From this perspective, CNET seems to have more credibility and be a bit safer, even though some issues are present and users still have to beware.

Our study shows that CNET is a bit more reliable and safer than Softonic from the perspective of downloads. Based on the majority of feedback, users have an overall better perception of CNET and seem to trust it a bit more. On the other hand, both websites are blocked with wrappers and if you are planning to use any, make sure you go to the direct download link to avoid any issues!

Last but not least, remember to always have an Adblocker and antivirus running on your computer, because these will make navigating through downloading portals an overall safer experience.