Techniques For Taking The Best Shot 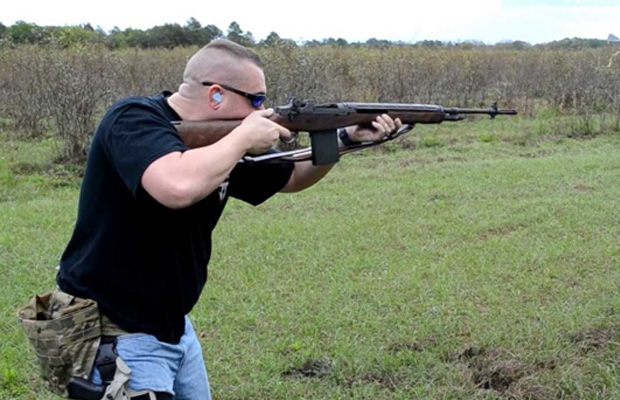 Whether you’re gaming, or in reality, we all know that the best way to become an accurate and consistent marksman is to practice. Start by using the most stable position. There are four positions to chose from when practicing:

Lying on your stomach with both of your elbows propped holding the gun is called the prone position.  The prone position is the most stable and gives you a steady foundation to make accurate shots.

Sit on the ground, knees up in front and with both elbows on your knees. This position provides stable support for your arms as they hold the gun. Next to the prone position, sitting is the steadiest position.

Drop one knee on the ground and rest your elbow on the other knee.  It is very easy and quick to assume the kneeling position in the field, but it isn’t as steady as the prone or sitting positions.

Because neither arm is supported, this is the most unstable and challenging position from which to fire a rifle.  Unless you have plenty of practice, are very sure of your ability and confident that you have a clear, close shot then it is not recommended to shoot at game from the standing position using a rifle.

Some methods to assist your shot and increase accuracy:

Once you have identified your target calmly get in position to shoot.  If you are wearing a backpack, it can make an excellent and stable ‘rest’ pad to lay your rifle on in the prone position.

A quick survey of your surroundings may reveal a natural ‘rest’ that you can use to assist with an accurate shot.  Examples are trees, tree branches, a fallen log or a large rock. Using a tree as a rest can significantly increase the stability of a standing shot.

Learn yourself and the gun against or on the rest but don’t put the barrel directly on a hard surface.  If the barrel is in direct contact with a hard surface, the gun will tend to shoot higher than normal.  It’s best to leave your hand, your hat, etc. under the fore stock or the barrel as a pad.

Nervous or even natural breathing can move the rifle enough to cause you to miss the shot.  Mitigate this by practicing your breathing technique at the firing range so that it will come naturally when you have a live game as your target.  With your target in the sights, relax, draw a deep breath and exhale about half of it, then calmly and confidently squeeze the trigger.

Use Your Sling As A Brace

One of the best ways to increase your stability in any position is to wrap your arm through your gun sling and pull it snug by leaning your arm slightly out.  If possible, practice this technique at the shooting range, or using an unloaded gun you can practice the movement before you get in the field.

After taking the shot, hold firm and stable for a second or two.  Keep your eye on the target to see if your shot was accurate. Holding steady prevents you from jerking the gun before the bullet has left the barrel and puts you in a position to take a second shot if necessary.