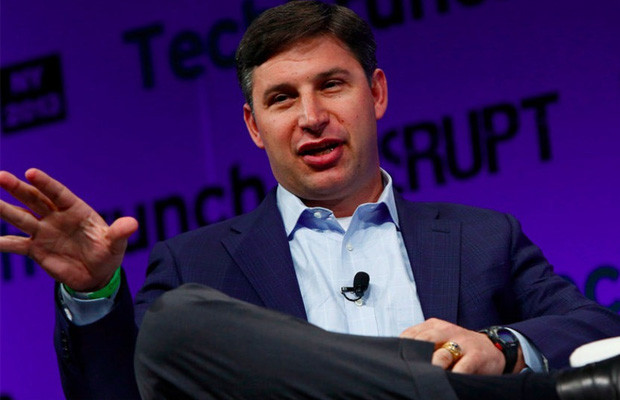 Twitter paid its recently hired CFO Anthony Noto the fat bundle, almost all of it coming from option and stock awards, according to an SEC filing from the company on Monday.

His compensation was nearly double that of the combined salaries of the other five executives whose salaries were mentioned in the filing. That group includes CEO Dick Costolo, who made around $14,000.

Noto was hired to Twitter in July of last year to help improve the social network’s relationship with Wall Street — and, you know, occasionally leaking details about possible M&A deals because he doesn’t know how to send direct messages. He had previously worked as a banker at Goldman, where he helped steer Twitter’s public offering in 2013.

Mike Gupta, the previous CFO at Twitter, received $24.6 million in compensation for 2013, which was also the highest pay of any Twitter executive until then. Gupta has since transitioned into a role overseeing Twitter’s venture capital arm. His compensation dipped to $263,234 for 2014.

Dick Costolo, the company’s CEO, has gradually reduced his own base salary from $200,000 in 2012 to just under $14,000 in 2014. Don’t cry too much for Costolo though: His family trust sold off more than $20 million worth of Twitter shares and the CEO still owns options worth hundreds of millions more.

Deutsche Bank analyst Ross Sandler said in a report to investors today that he believes the company is a “strong buy” because “there are a number of catalysts to come in 2015, including: 1) benefits from recent feature like Instant Timeline and Video, 2) the Google traffic flowing to Twitter starting in 2H, and 3) Periscope.” Sandler said that Twitter’s market capitalization, compared to the market caps of rivals including Facebook, which is 6.5 times the size, and Google at 11 times the size, suggest the company’s stock is “underowned.”

That may be true for most investors in the social media giant, but certainly not for Noto, who now has a generous helping of stock.