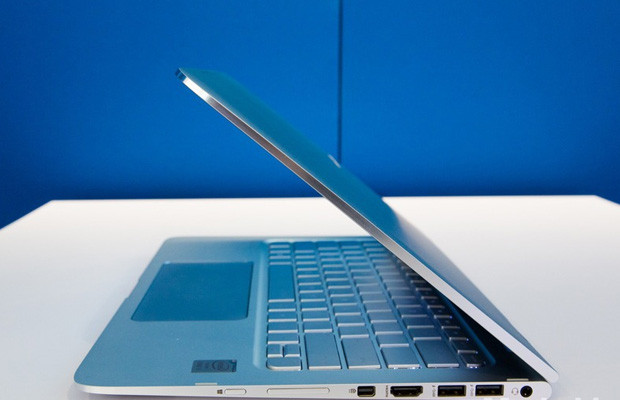 Windows laptops are cool again. After a boring year for both desktops and ultrabooks, the PC story’s different this year.

PC manufacturers are actually making a concerted effort to sell laptops with premium designs at reasonable prices. Asus’s ZenBook UX305 is a real head-turner and Dell’s XPS 13 is wonderfully small for a 13-inch laptop.

Lenovo may have popularized the 2-in-1 convertible ultrabook/tablet with its Yogas, but it’s HP’s premium Spectre x360 which runs Windows 8.1 and starts at $899 that takes that concept and shoots for the stars.

The x360 is the product of a deep collaborative effort between HP and Microsoft. It isn’t aMicrosoft Signature Edition laptop, but it’s damn close. If Microsoft designed its own laptop, it’d probably look like this.

Plastic out, metal in

Just as smartphone makers are ditching plastic in favor of metal and glass, so too is HP. The x360 is created from a block of aluminum; its frame has almost no flex and no visible parting lines. The edges are jewel-cut to shimmer under the right lighting conditions. It’s a beautiful computer that can easily go head-to-head with a MacBook Airor Retina MacBook Pro in a beauty contest.

The x360’s slim 0.62-inch body is marginally thinner than a 13-inch MacBook Air. But don’t let its pretty looks deceive you, it’s actually heavier: 3.26 pounds versus the Air’s 2.96 pounds. Both Lenovo’s Yoga 3 Pro and Dell’s XPS 13 are lighter, too. The x360’s not a heavy computer to lug around, it’s just not the easiest on the back.

They say imitation is the sincerest form of flattery and HP’s shameless about copying Lenovo’s Yoga 2-in-1s. Like the Yogas, the x360 has a hinge that allows the screen to flip a full 360-degrees backwards.

While most people will leave the x360 in laptop mode, it can also be positioned in tablet, tent and stand mode. (The names are even the same as Lenovo’s.) I can’t say I’m fond of using the x360 in any mode other than laptop — a 13-inch tablet is too unwieldy — but if you’ve always wanted to prop your laptop on a bedside table or on a kitchen counter, now you can.

The x360’s 13.3-inch touchscreen comes in full HD (1,920 x 1,080) and Quad HD (2,560 x 1,440). My review unit came with the full HD screen and from what I could tell, it’s really sharp — not Retina display or 4K screen crisp, but still high-res. Full-resolution pics look great with lots of details and vibrant, vivid colors. Rendered text is a crapshoot: It sometimes looks good (like in Internet Explorer) and sometimes looks fuzzy (when running an app installer wizard or in Notepad). 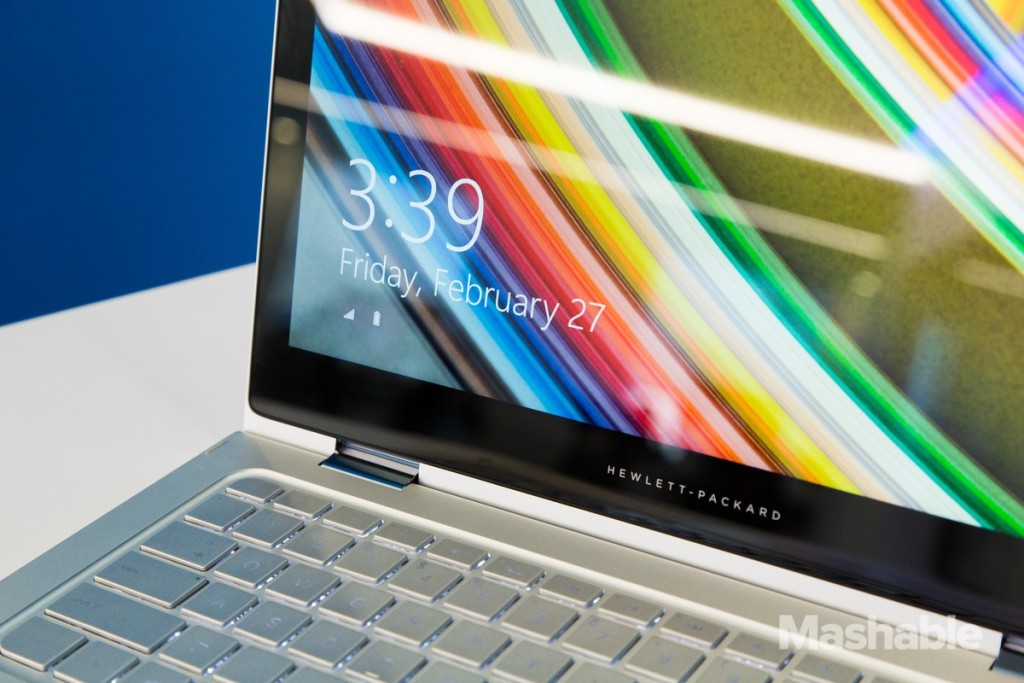 HP says viewing angles on the x360 are supposed to be out of this world with the IPS display and all, but while they’re good, my two-year-old iPad 3’s Retina display is still better. At half-brightness, my iPad 3 showed better viewing angles and deeper blacks compared to the x360 at full brightness.

But more jarring is how reflective the screen is — a concern I noted in my hands-on. With the lights turned down, the reflections aren’t quite as visible, but in an office setting with overhead lights, the reflections are extremely distracting. My work MacBook Air (2012) and personal 13-inch Retina MacBook Pro (2014) are both a lot less reflective.

Fortunately, the HP gods endowed the x360 with one of the best laptop keyboards out there. The chiclet-style keys are spacious and have a 1.5mm travel depth, which makes it a breeze to bang out a 1,000+ word review on. One thing I didn’t like: There’s no way to adjust the backlit keys. The backlight can only be switched on and off — and you gotta do it manually. 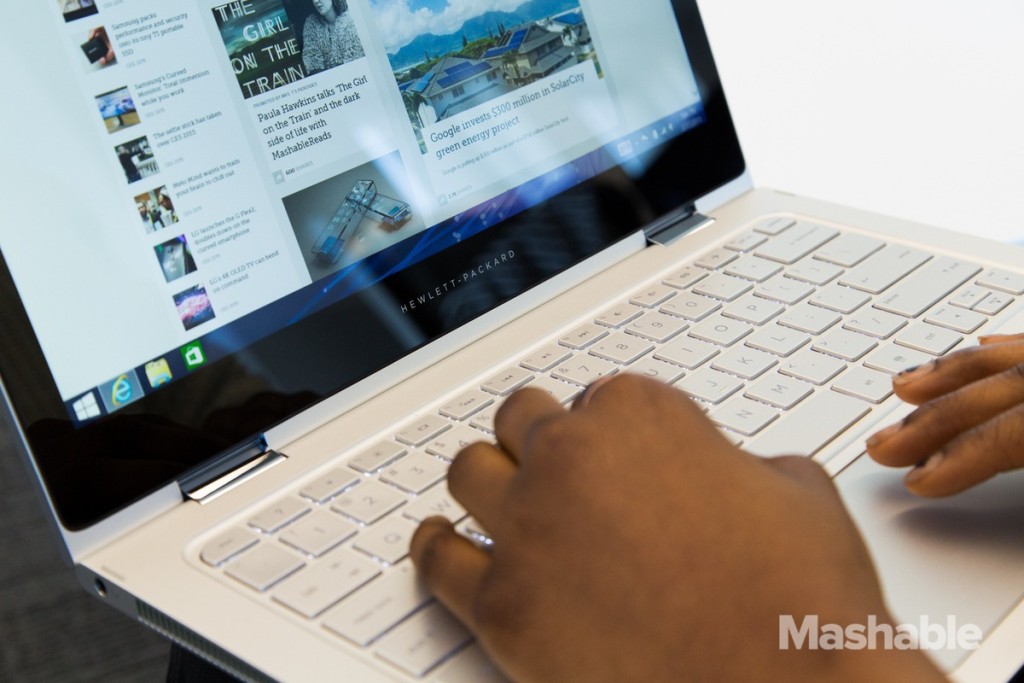 Unfortunately, I can’t sing the same praise for the trackpad. HP made the trackpad extra wide — a boon for multitouch gestures — but the mousing is horrific. The trackpad’s got some serious lag where the cursor just doesn’t follow properly. I’ve tolerated crappy trackpads in the past, but it’s 2015 and there’s no excuse for having a trackpad that still trails so far behind Apple’s MacBooks in terms of responsiveness.

The responsive touchscreen makes up for the lousy trackpad to a certain extent, but let’s not pretend it’s a replacement for a good solid trackpad.

Tons of power and ports

It’s remarkable how powerful ultrabooks are these days. We’ve come a long way from thin laptops with processors that would choke under a dozen Chrome tabs and a handful of open apps.

The x360’s no gaming laptop, but it’s a very respectable consumer and work-machine. I tested the $999 model with a fifth-generation “Broadwell” 2.2GHz Intel Core i5 processor paired with 8GB of RAM, 256GB of solid-state storage (SSD) and Windows 8.1. 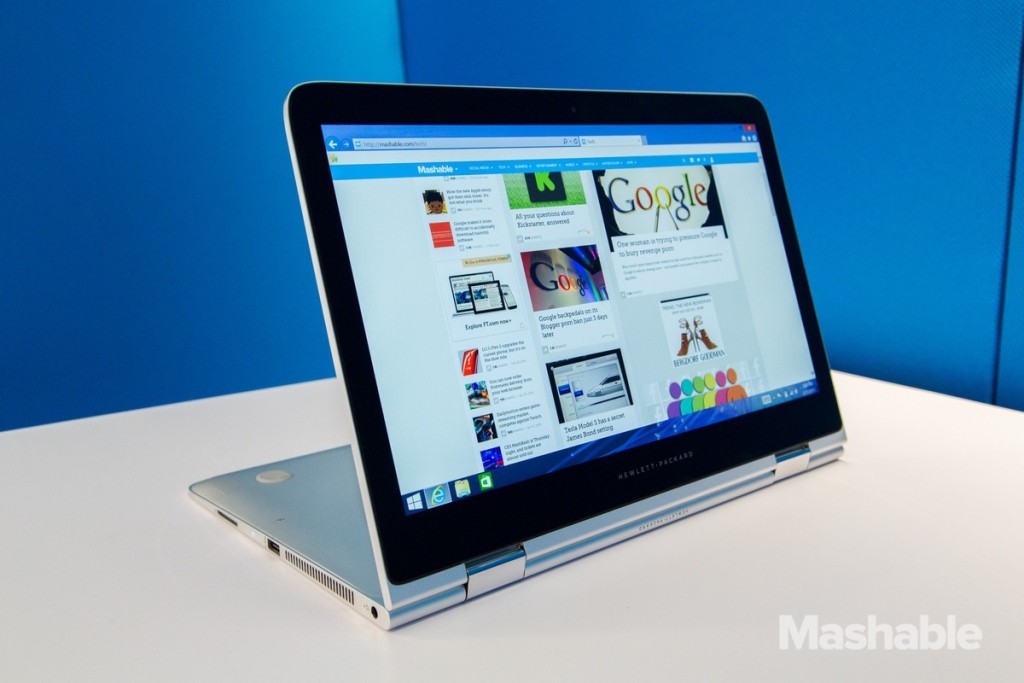 My test unit, which HP anticipates will be its most popular configuration on a price/performance ratio, exceeded my performance expectations. It boots up in under seven seconds and shuts down in under five.

The x360 was able to handle just about everything I threw at it.Opening 20 Chrome tabs? No problem? Streaming 4K resolution video on YouTube? Piece of cake. Its Intel HD 5500 integrated graphics chip can handle old games like BioShockand Borderlands 2 at playable frames rates of up to 30 frames per second at 720p resolution.

HP touts up to 12.5 hours of battery life on this bad boy, but like all laptops, there’s a long list of footnotes that accompany that figure. I did an HD video loop test and the x360 did get 11-12 hours before it conked out, but nobody’s watching videos for that many hours straight.

With Wi-Fi turned on and brightness at full (HP’s own testing set it to 70 percent, but I couldn’t see clearly without cranking it to 100 percent), I used the x360 like normal people would: I browsed the web, watched a bunch of YouTube videos, wrote a couple of reviews and bounced around Facebook and Twitter. In my week of testing, the battery lasted up to six hours on a charge, which is about what I get from my 13-inch Retina MacBook Pro. Obviously, turning off the Wi-Fi, keyboard backlighting and dimming the screen will net you more hours.

Lots of power isn’t the only thing the x360’s got going for it. It’s also packed to the gills with ports: three USB 3.0 ports (enough to plug in a mouse, keyboard and a hard drive/flash drive, or three hard drives, or to charge your other devices), an SD card slot, an HDMI port and a MiniDisplay 1.2 port. Again, you won’t be able to do any dual-screen gaming with the x360’s integrated graphics, but two-screen spreadsheets and web browsing is fair game.

HP’s Spectre x360 isn’t trumpeting anything new. It’s merely taking what exists and giving it a premium finish. The race to be the most powerful ultrabook is more or less over. What matters the most to users now is premium design and long battery life.

The x360 has both plus a great keyboard. But it stumbles on the other key aspects of a laptop — its two real flaws: a super reflective screen and a laggy trackpad.

I can’t say with any certainty if the trackpad will be improved with an update or if updating toWindows 10 will smooth it out, but if you can overlook that and the screen (hook it up to two external monitors and connect a Bluetooth mouse if you have to), the x360’s a powerful Windows 8.1 laptop convertible worth considering. One thing’s for sure: The pricing is right.

I Write Things.
Related ItemsHPHP X360Reviews
← Previous Story 2 Apps Entrepreneurs And Students Shouldn’t Live Without
Next Story → If You’re A Big Fan Of Apple & Its Products, Then We Have Just What You Need