You Can Create And Edit Microsoft Office Documents Directly From Box 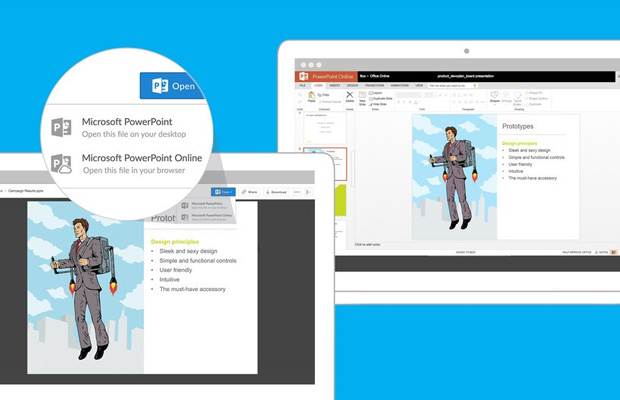 Box is rolling out Box for Microsoft Online to allow its users to create and edit Microsoft Office documents, spreadsheets and presentations within Box on their browsers, the two companies announced Tuesday.

Much like Microsoft’s earlier partnership with Dropbox, the new Office Online support will enable Box users to take advantage of the Office suite from within their browsers. To edit existing Office documents from Box, choose Microsoft Office from the “open with” menu on the document. The document will then open within the browser, along with all of the same editing and formatting capabilities as Microsoft’s browser-based Office Online apps.

Microsoft will also soon update Office Online with closer integration with Box through new sharing options that will allow Box users to share documents “with the granular collaboration controls they expect from Box,” Box VP of Mobile David Still wrote in a statement.

Meanwhile, Box CEO described in a blog post described the update as a “massive milestone” for Microsoft.

“This is not a trivial change,” Levie wrote. “Unlike the desktop, where you can open and exchange data between various applications – basic affordances of our desktop file system — the same hasn’t been true on the web. And by opening up Office Online, Microsoft is showing an amazing amount of proactive enablement for moving the future of work this direction.”

Microsoft has been steadily opening up Office to more and more platforms since CEO Satya Nadella took over last year. Since then, Microsoft’s chief executive has brought free versions of Office to iOS, Android, Dropbox and introduced new universal Windows apps.

Box currently has more than a billion Office documents, according to Microsoft’s Still, so bringing Office Online support to the cloud storage platform already popular among businesses is a significant move for the company.

The new Office Online functionality is available on Box.com for now but the companies say Office Online support will roll out to Box’s mobile apps later this year.