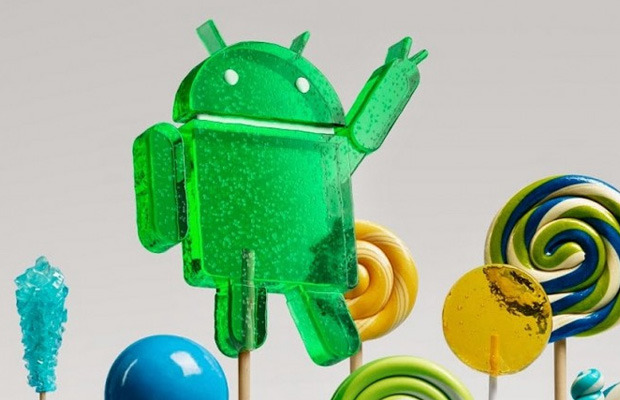 Android 5.0 Lollipop looks much different than all previous versions of Android thanks to its significantly updated design language. There’s also a fundamental shift in how apps are being run. These are the headlining changes, but there’s a lot more going on in Lollipop than you might expect — new features lurk behind every menu and around every animation.

Here are the five coolest, lesser-known features of Android 5.0 Lollipop.

Let’s say a friend needs to borrow your phone to make a call, but it’s that friend. You know the one — they’re always messing with your language settings or posting embarrassing things on your Facebook feed in the name of humor. If only there was a way to keep that from happening without guarding your phone like a hawk. In Android 5.0 there is — it’s called app pinning, and you can use it to lock the phone to a single app. 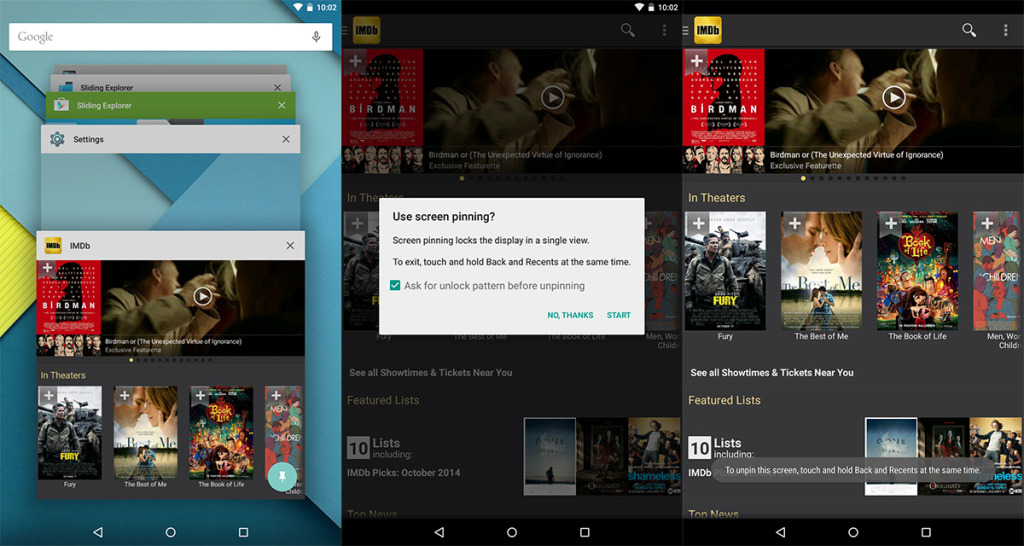 You can pin apps by enabling the feature in the security menu. This produces a small pin icon at the bottom of each card in the app switching interface. To lock the phone to a single app, simply open it, then hit the multitasking button. Tap the pin, and your phone asks if you want to pin the app. If you’ve got a PIN or pattern lock, you can also select the option here to require that code to leave pinned mode.

To leave the pinned app, you must press and hold the back and multitasking buttons at the same time. If there’s no secure lock engaged, this is more of a child lock that keeps little ones from accidentally emailing your boss. With the security measures engaged, even a determined prankster won’t be able to get to anything other than the app you’ve pinned.

The recent apps list in Android 5.0 certainly looks different, but that’s not all that makes it notable. The way apps are displayed in this stack of cards has changed dramatically. First off, the order and state of apps in the stack will be saved after a reboot. This allows you to quickly pick up where you left off should you need to restart for some reason. 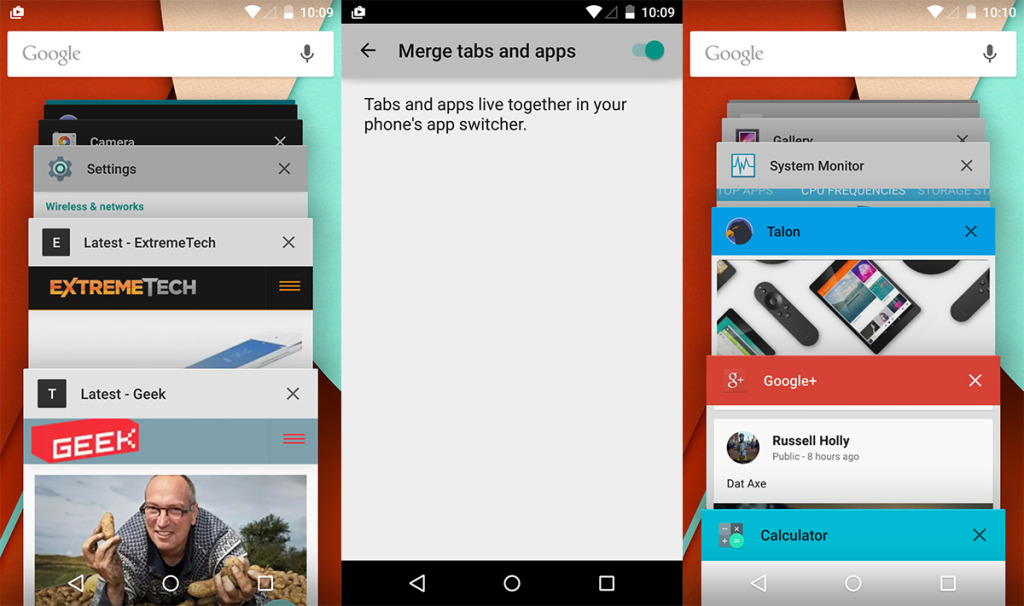 Android Lollipop also has support for displaying Chrome tabs in a slightly different way. When you launch Chrome, the app will ask if you want to move your tabs into the main app switcher. If you agree, it treats each tab like a separate task so you can hop between different apps and tabs using the same interface. The separate tab button in Chrome’s UI will be removed as well.

It is actually a smart way of organizing things once you get used to it, but should you tire of this, it’s easy to disable. Just hit Chrome’s settings and turn off tabs in the app switcher.

Android has supported automatic app sync from the cloud ever since v2.0 way back in 2009. It has become a little more reliable over the years, but is still very hit or miss. With Android 5.0, the first-run process is getting a complete overhaul and works so much better. If you’re just moving from one phone to another, you can now tap the old phone to your new Lollipop-equipped phone to transfer your account and apps. This Tap and Go feature uses NFC to automatically associate your new device with the Google account and app backup ID of your old one. It’s really slick. 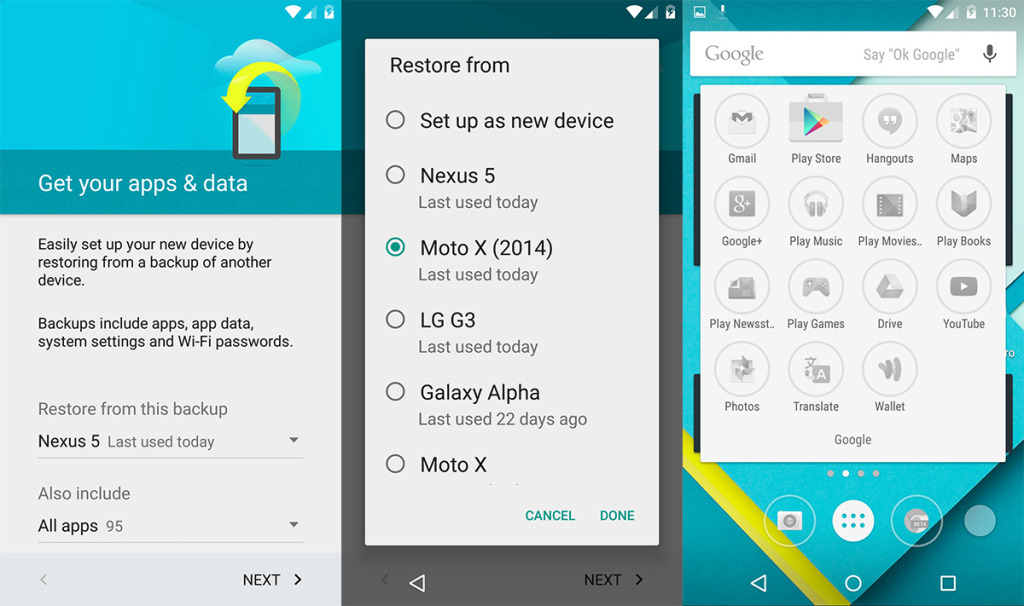 If you don’t want to go the NFC route, the new Android setup process will provide you with a dropdown list of all your previously registered phones and tablets so you can choose the device you want to restore from. This is really convenient if you have both phones and tablets around, so you don’t end up with phone apps on a new tablet and vice versa.When you get to the home screen, it will have all your app icons and widgets laid out, but the apps still being installed will have grayed-out icons to indicate they are still being restored. 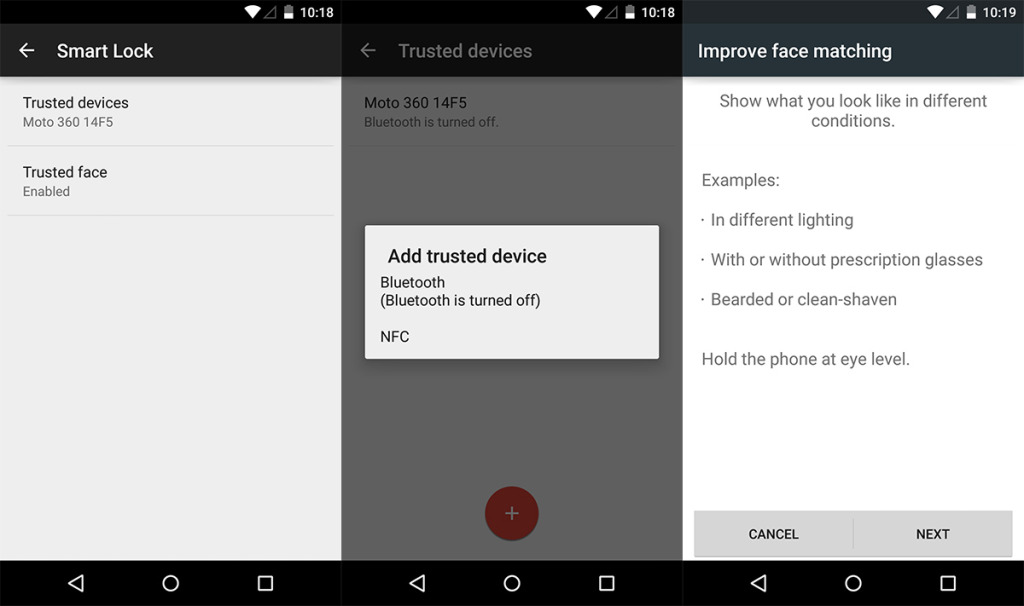 So if you set an Android Wear watch as a trusted device, your phone will bypass the secure lock screen when it’s connected. Lose the connection and your phone will again ask for the pattern or PIN before granting access. The NFC feature is also neat as you can program a tag to keep your phone unlocked as long as it’s in contact. This could be really handy for use on a car dock.

The trusted face feature is essentially face unlock, but actually usable. You simply enroll your mug as you would on past versions of Android, but with Lollipop, the lock screen will start doing face detection in the background as soon as you wake the device. You can look at the notifications on the lock screen or zip right to the unlock gesture. If Android IDs you in time, the secure lock is bypassed. If not, you input it normally. You don’t have to do anything different, so trusted face doesn’t slow you down if the lighting isn’t right if you forgot to shave this morning.

Google added multi-user functionality to Android in 4.2 Jelly Bean, but it was only enabled on tablets. That makes a certain kind of sense as tablets are more likely to be used by multiple people on a regular basis, but there are plenty of situations it could come in handy on phones as well. Android 5.0 finally makes that a possibility. 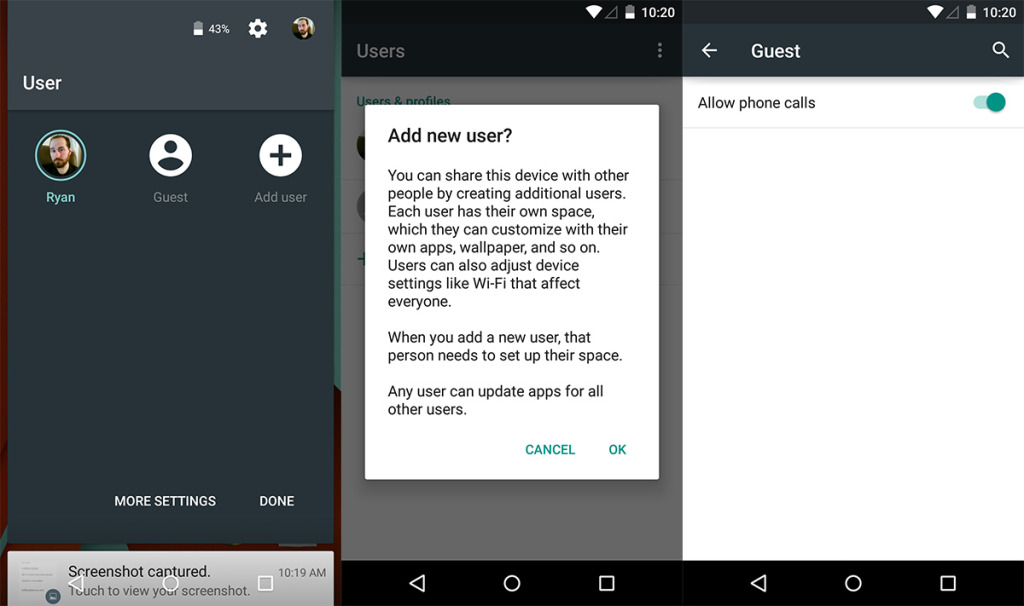 The new profile switcher can be accessed from the quick settings drop down. Simply tap the user avatar and pick from the accounts you have on the device. By default it’s only you and the guest account, but you can create accounts for kids, other family members who might borrow the phone, or whoever else you want.

The guest account won’t have access to any Google services or your data, but the pre-installed apps are all there. Android Lollipop also allows you to allow or restrict calls on the guest account as well.

This is really just the tip of the iceberg–Android 5.0 has more changes and revamped features than any previous version of the platform. Google really when over every detail this time to build something truly fantastic.