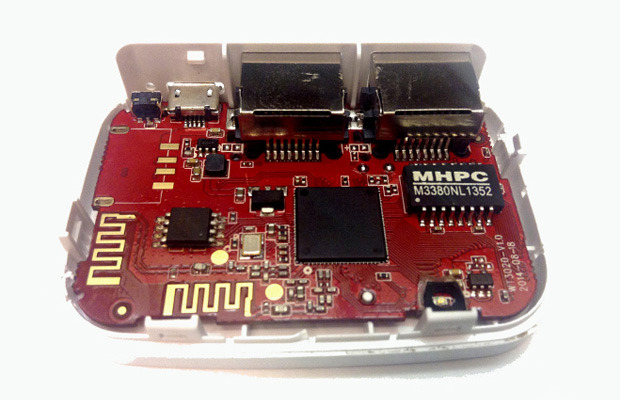 Over on Kickstarter, there’s another new gadget up for sale. Thankfully, it’s not yet another smartwatch; it’s a pocket-sized box that brings the anonymity of TOR to your home network.

This is anonabox, and it’s already blown past its paltry $7,500 funding goal. It’s not the first device of its kind. The folks at Pogoplug started selling their Safeplug nearly a year ago, though Safeplug has been knocked by some as not being all that safe. Then there’s the open source PORTAL project, which makes network-wide TOR as simple as flashing firmware onto a pocket router.

Anonabox offers the best of both worlds: it’s a retail packaged, plug-and-play TOR proxy that’s also fully open source. Kickstarter backers can secure one for $45 — a few bucks cheaper than Safeplug, though project lead August Germar hopes that mass production of anonabox will ultimately drive the price even lower.

Though it’s tiny enough to pop in your pocket, anonabox is probably best suited to use at home. It’s designed plug in behind your router and create a hassle-free, TOR-secured segment for (mostly) anonymous browsing. Like a DIY PORTAL router, anonabox lets you connect via ethernet or Wi-Fi.

The anonabox project page also doesn’t mention being able to use it as a wireless client, which would be one major reason you’d want to pop it in your pocket. You might not, then, be able to use it to secure traffic between your laptop and a public Wi-Fi hotspot. Perhaps that functionality will come later — it would certainly be a welcome addition. Since it’s powered via a micro USB port, you wouldn’t even need to remember an additional wall wart to power it on the go.

I Write Things.
Related ItemsTechnologyTor
← Previous Story Wi-Fi Is About To Get Five Times Faster, Thanks To Samsung
Next Story → Skype Launches Standalone App For Disappearing Video Messages