Facebook Is Giving You More Control Over Your News Feed - TechGeek365

Facebook Is Giving You More Control Over Your News Feed 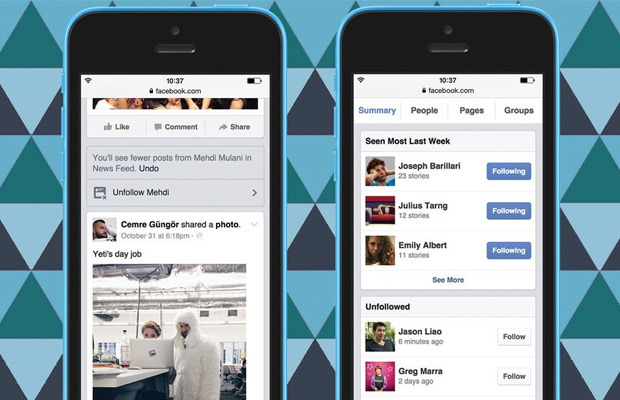 Facebook is giving you more ways to tweak what you see in your News Feed.

The social network unveiled a new settings menu and customization options for News Feed that allows users to personalize the types of content they see.

The News Feed settings menu, which appears in the Facebook apps and on the web, displays which friends appear most often in your News Feed and which friends you’ve chosen to unfollow.

From there, you can choose to unfollow people you don’t want to see anymore or re-follow (Facebook calls it “reconnecting” with) those you’ve previously hidden from your feed.

The News Feed itself also contains new ways of giving feedback about the types of posts you don’t want to see. Now, instead of choosing to unfollow someone entirely, you can opt to see fewer stories from a friend or page you follow.

The change is part of a larger effort to make users’ feeds more relevant to what interests them, product manager Greg Marra said.

On any given day, there are about 1,500 different stories that can appear in a user’s News Feed, but people only see about 150. The algorithms behind News Feed take into account your previous actions — liking photos or clicking on links, for example — as well as what type of device or what type of Internet connection you’re on, Marra explained.

“We know ranking isn’t perfect … we can’t just look at clicks by themselves as away of telling whether these stories are really interesting,” Marra said, pointing to Facebook’s recent efforts to reduce the amount of clickbait that surfaces in News Feeds. “We’ve been thinking: How do we get at this qualitative angle of what people really want?”

The new settings menu is available on Facebook’s apps and website beginning Friday, while the other customization features will roll out in the coming weeks.