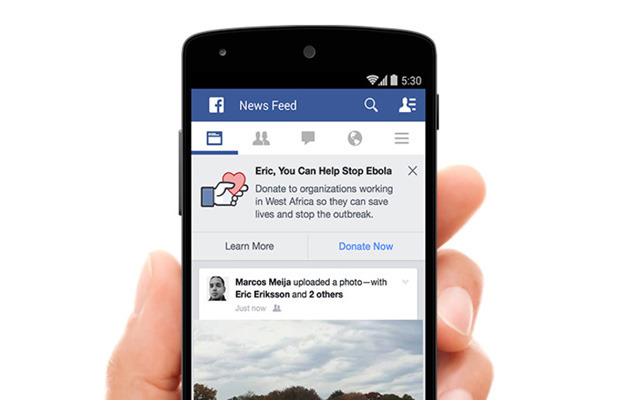 Following the example of its founder Mark Zuckerberg — who recently donated $25 million to help fight the spread of the Ebola virus — Facebook is today announcing three new initiatives in support of those affected by Ebola. First and most significant is the addition of a new donation notification, which will appear at the top of every Facebook user’s News Feed over the next week. It’ll be a simple message with an option to directly contribute to the funds of one of three non-profit organizations working in West Africa at the moment: the Red Cross, International Medical Corps, and Save the Children. You can use PayPal or a Visa or MasterCard to complete the payment.

Facebook will also push awareness-raising UNICEF messages to the News Feeds of people in the West African countries most affected by Ebola. These will contain basic information about the typical symptoms of the disease and direct those suspecting they might be infected to go to the nearest health facility. Finally, Facebook is donating 100 mobile satellite communication terminals, which will be deployed in the most remote and infrastructure-deprived areas of Guinea, Liberia, and Sierra Leone to provide voice and data services where they are most lacking.

This level of activism and involvement is unusual for Facebook and would seem to reflect the seriousness of the Ebola epidemic that’s currently ongoing. The company says it “could become a long-term global health crisis” if it’s not urgently addressed and contained. No other social network has Facebook’s immense reach, and efforts to raise awareness and participation in the fight against Ebola will surely be amplified by its audience of 1.3 billion users. This also sets an important precedent for Facebook as a public body exercising a social conscience — which may come to be questioned if the company isn’t equally active in addressing other calamities in the future. One thing’s for sure: having gotten a lot of flak for the way it manipulated users’ News Feeds without their knowledge in the past, Facebook is now doing it in a positive and open way that will earn it more kudos than criticism.

I Write Things.
Related ItemsEbolaFacebookSocial Media
← Previous Story What Twitter Fabric Means For Developers
Next Story → Facebook Is Giving You More Control Over Your News Feed