Home / Social Media / Foursquare Has A New Problem: Employees Are Checking Out

Foursquare Has A New Problem: Employees Are Checking Out 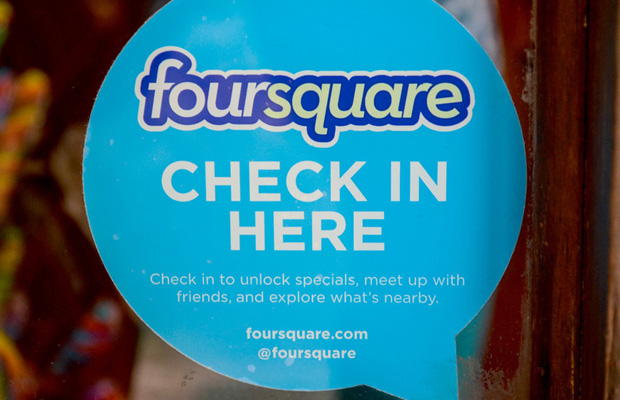 Foursquare has a problem: Many of its employees have checked out.

The company has lost more than two dozen employees over the last year — and several key members of its engineering team just in the last few months — including Vice President of Engineering Harry Heymann, Senior Director of Engineering Kushal Dave, and Senior Software Engineer Govind Kabra, among other employees in areas such as content and recruiting.

“If an employee hasn’t left, it is mostly because they haven’t found the right next gig,” said a source familiar with Foursquare’s internal matters.

Foursquare, and its companion Swarm app, aren’t going anywhere, according to several sources, which is exactly the problem. The six-year-old startup reports it has 50 million monthly active users tracked across mobile and desktop, up from 45 million in December 2013.

The mobile tracking firm App Annie reported Foursquare for iOS ranks #547 in the U.S. for general, daily app downloads. Swarm doesn’t rank at all. (Neither app ranks high enough on Android to chart.) In Apple’s App Store, finding either app in the “Top Free iPhone Apps” is its own kind of “Where’s Waldo?”, with Swarm hovering at #138 in the Social Networking category.

According to comScore, an Internet analytics company, mobile traffic for both apps has plunged, with a small uptick in March: 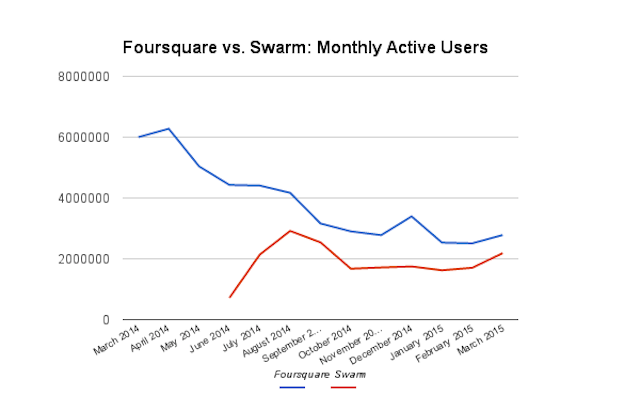 Despite recent speculation about a Yahoo buyout — a rumor that was quickly shot down — Foursquare management has no immediate plans to get acquired.

“I think an acquisition path is probably the best path,” Gartner Research Director Brian Blau argued. “The reason is not because Foursquare is necessarily failing, but without a partner that has more resources and horizontal businesses, how are they going to compete unless they take on more investment?”

But more fundraising would not go over well with many of the company’s 180 employees.

“People are incredibly frustrated and confused as to why there hasn’t been a sale,” said a source close to the company, who added more employees would head for the door if Foursquare tried raising more cash on top of the $121.4 million in venture capital funding and $41 million in debt it has already collected.

Raising another round, at least in Foursquare’s case, tells antsy employees not to expect a serious financial payout anytime soon, which leaves little incentive for those who think Foursquare is at a dead end as a standalone company. If that’s the case, why stay?

When reached, Foursquare CEO Dennis Crowley said it’s “business as usual” at Foursquare, denying any sort of employee exodus. Indeed, a company spokesperson pointed out that Foursquare’s headcount has seen “double digit” growth every year for the past six years.

“I think we’re humming along better than we have in a while,” Crowley added.

Foursquare may be humming along, but toward what exactly is an open question. When Crowley and Naveen Selvadurai founded the New York City startup in 2009, it generated lots of buzz.

Foursquare wasn’t the first location-based network to hit the scene — Crowley himself sold a service with a similar idea called Dodgeball to Google in 2005 — but it was the first with real promise. During Foursquare’s first year on the market, Crowley reported the service added 180,000 users every 10 days. A year post-launch, the app hit 5 million registered users.

Many of Foursquare’s initial users flocked to the app for its gamification features: Someone who checked into a place more often than any other user during a 60-day period, for instance, was crowned that venue’s “mayor.” Sometimes, retailers offered material incentives, too, like a 25% Gap discount on all clothes.

Crowley and Selvadurai’s faces surfaced in a Gap holiday print ad campaign in 2010. And even Facebook apparently recognized Foursquare had something to it, releasing a Foursquare-like feature of its own in 2010 dubbed Places.

But a lot changed for Foursquare in the years after. Selvadurai was pushed out of the company in 2012, in part because the company evolved to a point where he no longer had a viable role.

Meanwhile, Foursquare began to face the reality that it couldn’t run on buzz alone — it needed to grow up into a viable business. The company rolled out its first in-app business ads called “Promoted Updates” in 2012, followed by Foursquare for Business, a set of tools that offer businesses better targeted advertising and higher listing placement in the app.

The company also encouraged developers to build products using its data. Now, the company counts 85,000-plus companies using Foursquare’s location engine, including tech heavyweights like Twitter, Google and Yahoo. But it makes very little money on those integrations; it finally began charging some of the largest companies — just 1% of developers — last year.

Then last May, Foursquare puzzled folks when it split up the experience into two standalone apps — Foursquare for personalized search and recommendations, Swarm for check-ins — a decision Crowley argued had to do with offering a more focused user experience. The move also follows other companies such as Facebook, which has splintered its user experience into a “family of apps”: Messenger, Instagram, Hyperlapse, Layout and others.

But the split hasn’t given Foursquare the serious boost it needs. Monetizing its location data, as it started doing in 2014, may be not be enough: It has yet to generate significant profits despite what the company describes as “triple-digit” revenue growth year-over-year. That’s despite a deal hatched with Microsoft early last year, which has Microsoft using its location data to help power Cortana, the digital assistant, as well as Bing and Windows.

As for Crowley himself? The 38-year-old entrepreneur supposedly wants some change. A source close to the company described Crowley as “exhausted” from the last six years but said he would stick it out at Foursquare for at least a while longer, for fear of sending employees the wrong message and hurting morale.

If true, it would be the ultimate irony: Crowley checking out of the location-based startup he helped create.