Home / News / This Isn’t A Thumbdrive, It’s A PC That Weighs Less Than 2 Ounces And Works In Any HDMI Port

This Isn’t A Thumbdrive, It’s A PC That Weighs Less Than 2 Ounces And Works In Any HDMI Port 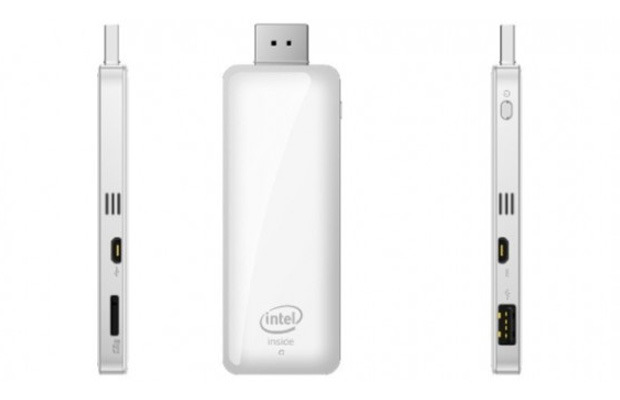 The plain-looking, white device you see up there isn’t a promotional flash drive Intel was giving out to conference attendees. It’s actually a Bay Trail Atom PC that tips the scales at just 1.6 ounces.

It’s similar to Google’s Chromecast, at least in the sense that it’s designed to plug into an HDMI port, can be powered via a micro USB port, and connects to the Internet via WiFi. This isn’t just a dongle you can cast video to, however. It’s a full-blown x86 PC.

This little fella is manufactured by the Shenzen Apec Electronics, and you can pick one up on AliExpress for around $125 including shipping. That price doesn’t include an OS, but you’re free to load Windows, Linux, Android, or any other Atom-friendly OS you want onto it.

What can you cram into a PC this small? Apart from the quad-core Bay Trail processor (a 32-bit Z3735F), it’s got 1GB of RAM, 16GB of storage, 802.11b/g/n and Bluetooth 4.0, and a micro SD expansion slot. A beefier model is available with a 64-bit Atom Z3735G and 2GB of RAM, but the seller doesn’t have a price posted for the upgrade. Internal storage can be bumped up to 32GB, but again… no pricing.

The guts in here are similar to what you’d find inside that $65 Windows tablet that popped up earlier this week. As far as why you can tack on a touchscreen display, a rechargeable battery, pre-load Windows on it, and still price the device $60 less than this PC, well… in the tech game, smaller things often cost more money.

That might not be the official explanation from Shenzen Apec, but it’s certainly true in a lot of cases.