Rapid Infrastructure Transformation Powering The Growth Of 2GIS In The UAE 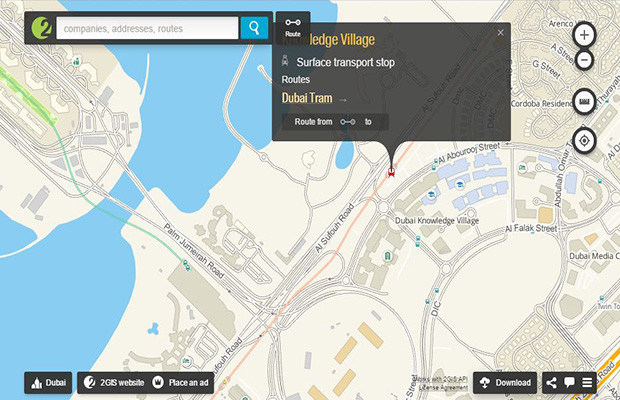 Smart city map and business listings solution provider, 2GIS, has attributed its immense growth and popularity in the UAE to the rapid infrastructure changes taking place in Dubai in the run-up to Dubai Expo 2020.

The breath-taking pace of transformation that the city is undergoing owing to the multi-billion dollar transportation projects and other infrastructure-related schemes are expected to continue driving surge in dependency, download and usage of the App.

Karan Patel, 2GIS Marketing Manager said, “The recently completed, ongoing and upcoming projects in the Emirate such as the Dubai Tram and Dubai Water Canal are ringing in several changes in the existing layout of roads and routes and will lead to new ones as well. The adoption and usage of technology for road navigation has increased exponentially over the last few years, and our smart city map application is the ideal solution for all residents, visitors and tourists in Dubai.”

Since going live in Dubai over six months ago, the number of app downloads have been on a steady increase and currently has over 50,000+ downloads with over 1,000,000 page views in the online version. With the current favorable weather being experienced in the region, more people are spending their time outdoors moving around the city either on business or leisure.

Search traffic and usage has also surged upwards after the app was upgraded to also include a detailed 3D map of Dubai mall floor layout, which is the first mall in the UAE to be mapped by 2GIS.

The most searched route in Dubai over the same period was Dubai Marina to Dubai Mall with Mondays and Tuesdays recording the days in which people perform the most searches.

In addition, “Smart applications will play a very important and integral role in the successful implementation of the Smart Dubai Initiative as Dubai continues its quest of becoming one of the smartest if not the smartest cities in the world over the next three years. The recent launch of Makani, the new geographic address system in Dubai corroborates the underlying need and demand for smart applications, on which our local growth outlook has been based”, added Patel.

2GIS regularly updates the maps and routes, as well as its business listings. Currently the 2GIS smart city map of Dubai shows over 156,000+ buildings and structures and contains information more than 100,000 companies in the city. The app is free to download on the Apple App Store, Android Play Store as well as BlackBerry World, is fully functional offline and requires an internet connection only once a month to update.