In 2014, the ability to share files with other smartphone users, regardless of platform, is one of the top features that users want available to them. Sure, there is email and SMS as the old standbys, but increasingly people want direct ways to offer a song, photo, video, or documents.

Send Anywhere launched in early 2013 on iOS and Android, and now a port of the app by the company is available on Windows Phone. The free service works by uploading to a server the intended file, generating a numeric code, which you then give to the recipient. Using the same app, the receiver enters the unique code and retrieves the file to download to their device.

Send Anywhere for Windows Phone is not a pretty port, but it works. Graphics overlap on the right edges, and the stodgy UI looks extremely basic. However, putting aside aesthetic concerns, the app does what it is intended to do, send those files. 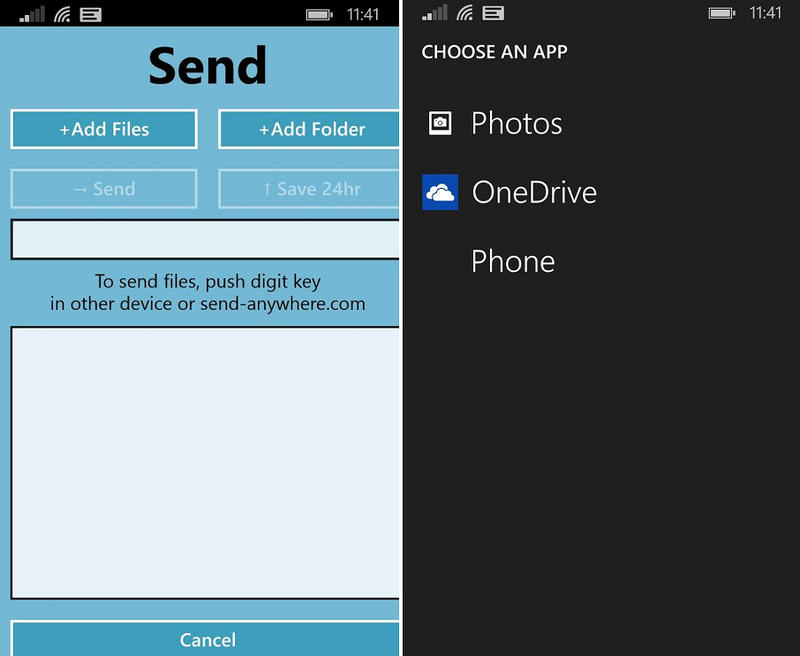 The question for many is on Windows Phone, just how much can you send? The Windows Phone OS is typically more locked down than Android, so sending everything in the file directory is usually not possible, but surprisingly a large number of files are supported, including:

Files are accessed from the camera roll, phone, and just as importantly OneDrive. Once the file is uploaded, you need to send the numeric key to the recipient as there is no usage of the Windows Phone Share picker, which is a bit of a shame. Instead, users need to copy and paste the code into whatever message app they plan to use to give the code out – not a deal breaker, but a little bit clumsy, especially since there are APIs to make this task easier.

You can watch the demo video below from the company to see it in action.

Send Anywhere works through cellular or Wi-Fi data, so please be aware if you have limits on your plan. File sizes look to be any size, though we have not exhausted all attempts just yet.

Overall, it is great to see Send Anywhere jump to Windows Phone, even if the coding (and the copy paste app details in the Store) are a bit sloppy. Besides Android, iOS and Windows Phone, you can also share files via their website send-anywhere.com or through their beta Windows desktop app.